Mr. Cheap Jeep was about to lay down on us last summer so we placed him in a good home and bought the General. We loved the ride, comfort, low miles and looks of the General but he had a tail gate that made it very difficult to load Odie's power chair (Affectionately called the Electric Chair) and the PA system in the back. Plus the General had an unquenchable appetite for gasoline that often took us way beyond budget in that area.

So we found a new home for him in Foley, Alabama and we began the search for another ride. We had several stipulations when looking for transportation.

1. It had to be able to be towed behind the BoggsMobile with all for wheels on the ground. That limits our choices quite a bit.
2. It needed to have room to carry both of Odie's wheel chairs. Which also means it has room for the PA system when we need to haul it.
3. It needed to be "Fat Man Friendly." Enough said but VERY important.
4. It needed to be affordable. We have no debt beyond the BoggsMobile and we really want to keep it that way.
5. We wanted to be able to drive past at least 10 gas stations before needing to stop. Mr. Cheap Jeep and the General loved gas stations. Did I mention the unquenchable appetite for gasoline?? Yes, I think I did...
6. We wanted something with low miles but we were realistic about this one since we were also looking for something cheap.

About 10 minutes after I sold the General my Dad called to tell me about a car he had found in Ohio. It was capable of being towed with four wheels down and already equipped with a baseplate for the hitch. Kelly Jo immediately began researching and fell in love with the car. The MPG was great, the wheel chairs fit, it was affordable and had low miles for a 2006. We found one in Mobile, Alabama that was the same year and make to see if it was Fat Man Friendly. We looked it over and after passing that last test we were ready to buy.

The only problem was the fact that we were not going to be in Ohio near the car my Dad found for several weeks. In the process of that time we missed the opportunity to buy it so we were back to square one.

Last week we found a number of them that fit the criteria within a 2 hour radius of Waynesville. We sent and received emails and texts, made several calls and narrowed the list to four. Saturday we set out to look at them with our own eyeballs!

We went to see the nearest one first. It was also the one that jumped out at us as far as color was concerned. As usual the pictures in the advertisements did not tell the whole story but we expected as much. It is impossible to show or see every flaw in a few pictures. It has some scratches and dings but for a 6 year old car with nearly 74,000 miles it is in pretty good shape. (Since we are going to pull it behind a bus it would make me nervous to have a perfect car back there.)

We drove it and looked at every nook and cranny. We made an offer and bounced the ball back and forth until we had a price we could live with and drove it home early that afternoon.

It is a beautiful green 2006 Scion xB made by Toyota and here it is... 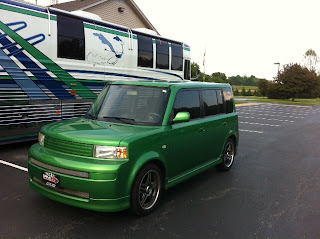 We haven't had much sunshine the last couple of days so it has been difficult to take good pictures of it. These pictures are the best I could do...

(I was able to take a few pictures in a little more sun after I had written the post. I have posted them at the bottom of the page.) 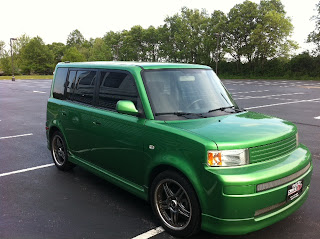 Notice that the green nearly matches the green stripe on the BoggsMobile... 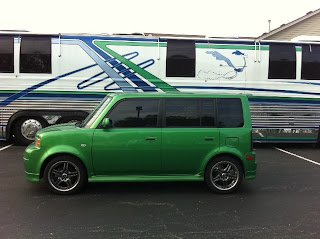 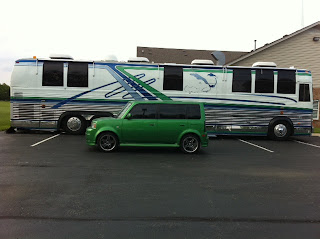 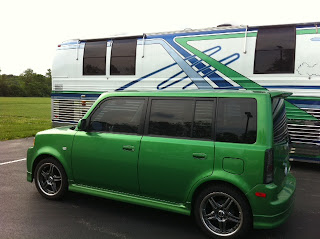 See how Fat Man Friendly it is... It is surprisingly comfortable. 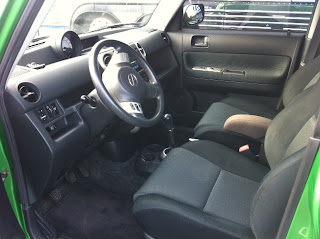 It has four big wide doors. 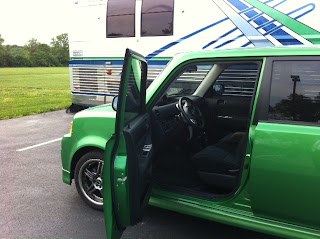 We have a few that have been floating around....

-The Gecko (And it is insured by GEICO)

We have no favorites yet. Most of the names above feel pretty natural to me. Give us some more names or tell us which ones of the above you like. This ought to be fun. I can't turn it into a vote because the name needs to feel right to us but if some one comes up with a name that is "all that" and more and it is the clear winner in our hearts, we will have to come up with a prize. A CD package maybe? 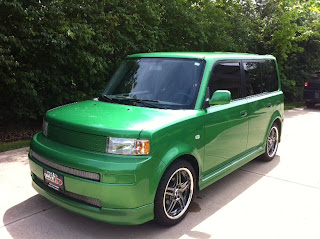 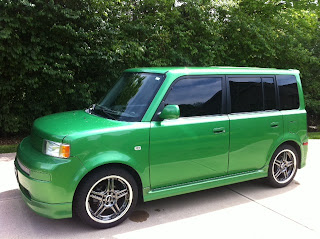 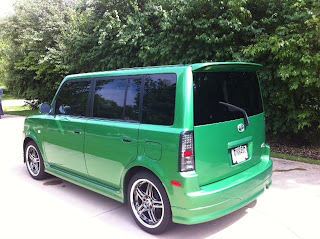 Posted by Davy, Kelly and Odie Boggs at 2:00 AM