Do You Know Bill Houston?

Do You Know Bill Houston? That's Bro. Bill on the left in the picture below at Dryden Road Campmeeting last August. 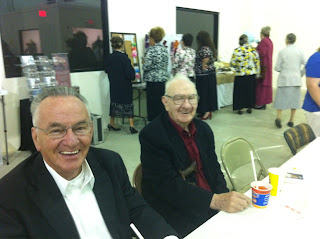 Do You Know Bill Houston? We have been blessed to know Bill Houston for well over twenty five years. He preached a homecoming service at Harveysburg shortly after we were married and we could not believe such preaching was possible. He preached on "The Bulls of Bashan" and described what our Savior endured to pay the price for our sin. He preached with anointing, power, conviction and compassion. I remember distinctly the effect that sermon had on us. We have literally never been the same since!

It would be a few years before we would visit Dryden Rd. Church and realize that was Bro. and Sis. Houston's home church but the preaching that day at Harveysburg church opened a whole new world to us.  We began to seek out preaching like that. We began to hunger for preaching backed with prayer, study and purity.

As we spent time with Bro. Bill and Sis. Darien we completely fell in love them. We discovered they were the real deal. They took us in and loved us unconditionally and quickly became an extra set of grandparents to Odie. They helped us draw closer to God every time we were around them.

Bro. Bill's preaching has been a great help to us all these years. His preaching continually confronted and inspired us. He has challenged us to dedicate every part of our lives to the Lord. He has encouraged us when we were low and caused us to seek deeper experiences in God.

However, Bro. Bill's preaching has only been part of his influence on us. It is undeniably a large part but he has influenced us so much more than that.  His personal consecration to God, his pursuit of holiness and his unquenching love for souls  and dedication to evangelism has produced life changing results in our lives.

Bro. Bill was the first evangelist that we spent very much time around at all. He became the ultimate personification of an evangelist to us. His passion and devotion energized and motivated us to be the best evangelists we could be. It might horrify him to hear me say this but much of what I do as an evangelist and much of how I operate came as a result of his effect on our lives.

Thank you, Bro. Bill and Sis. Darien for your Godly example, Christian character and loyal friendship through the years.  You have touched many lives across America and are continuing to do so even now. God bless you for your faithfulness.

Do you know Bro. Bill Houston? He is definitely worth getting to know.

Davy
Posted by Davy, Kelly and Odie Boggs at 7:52 AM

Email ThisBlogThis!Share to TwitterShare to FacebookShare to Pinterest
Labels: Do You Know_____?