We realized early in the Tent Revival season last summer that we could not do all the work ourselves. Even with the Millikins joining us for four weeks and the local churches helping with the tent there was still much physical labor to do everyday.

We had considered taking some young men with us for a few weeks but could not seem to come up with anybody so we dropped the idea.

After working my little wife nearly into the ground last summer I knew I had to do something different. I put out the call and several young men responded initially.

We prayed, talked to Pastors, teachers and friends. We eventually settled on two young men. They joined us Saturday and will be with us for five Tent Revivals over the next seven weeks.

They are Caleb Bontreger and Colton Cravatt. Caleb is from Granite City, Illinois and is attending OBI in Neosho, Missouri. Colton is from Tulsa, Oklahoma and is just finishing high school.
Caleb 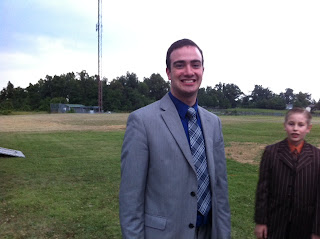 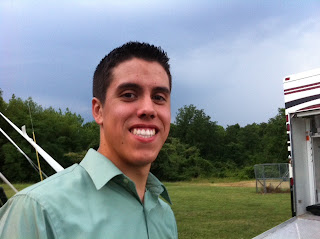 We are glad to have them along for part of the ride this summer. Neither Caleb or Colton have been around tent revivals so I am sure they will gain some hands-on ministry experience and hopefully be rewarded spiritually in the process.

We are providing room and board which being interpreted is a Sunday School room to sleep in and lots of hot dogs, bologna and maybe even some cheeseburgers to eat!

Pray for Caleb and Colton as you pray for us the next several weeks. I would appreciate it.

Davy
Posted by Davy, Kelly and Odie Boggs at 7:37 AM