Praise God for an easy repair to a long term problem.

I mentioned the other day that Rudy the Aquahot guy gave me some good information/diagnosis that I had been seeking for quite some time. He gave me some insight into a problem with the electric heating element in the Aquahot. The unit is diesel fired but it has a supplemental electric heating element. Ours has never worked correctly for us and started kicking the breaker shortly after we bought the BoggsMobile.

I have checked everything I could see, traced every wire I could get too and could not solve the problem. Rudy told me there was an access panel that was inaccessible on my bus. My auxiliary air compressor is mounted in the same bay and it has a box mounted around it. I did not realized that box was blocking access to another panel with electrical connections.

He was sure there was a loose or broken connection in that hidden panel. He was correct!

The front of the box came off with 6-8 screws. I have had that off before just to see what was in there. The box was mounted to the coach with four mounting brackets and two of them were unreachable by a screw driver. I purchased a 12 inch extension for my drill and linked it up with another extension so I could reach the back of the box and remove the mounting screws. Four screws in the back, four screws in the front and the box was out. With the right tools I had it removed in about 3 minutes.

Here it is with the box removed and the electrical access panel removed. 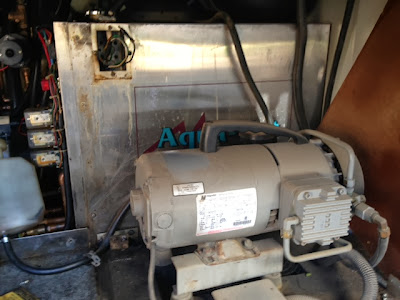 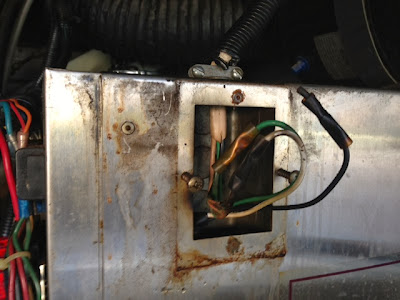 The wire was no doubt loose when we bought the BoggsMobile. That's why the electric element was undependable. It finally broke and would not work at all.


I trimmed both wires back and made good connections with wire nuts and now the element is heating. 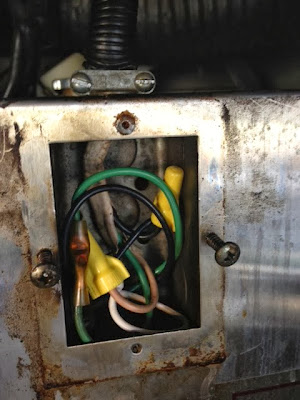 
It took more time to take everything out of the bay and put it back in than it did to actually remove the box and fix the electrical connection. 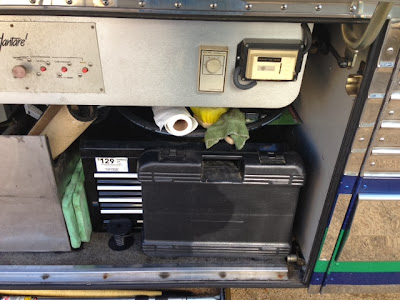 Thanks for the information, Rudy.

Posted by Davy, Kelly and Odie Boggs at 5:25 PM