I was so tired Friday night that I just posted pictures and went to bed without writing much at all. I must be a wimp. I said in this post that Travel Day and Tent Set Up should never be mentioned together in the same sentence let alone be done on the same day. But Friday I went and done it again!

In my defense, the travel day was a very short one and the tent was supposed to go up Saturday not Friday. The travel ended up being much more involved than planned due to a major coolant leak and the weather forced us to set up Friday. Those two things combined to make a day that was supposed to be short and easy much longer and more difficult. Like I said, I must be a wimp.

We left Ellisville after adding coolant and drove the 30 miles or so to Richton with no problems at all. As I was directing Kelly Jo in backing the BoggsMobile into position I noticed a puddle of coolant and knew this was not my day. The bus never ran above normal temperature at all but it is not something I want to risk at under any circumstances. That ratchets the stress level up a notch or two.

We parked as quickly as possible and went to work on getting the trailer into position and marking the stake line for the tent. Pastor Scott Morris was right there with me the whole time.

We were racing against time because a massive storm system was moving through and we needed to beat that rain. Bro. Scott and Bro. Blue from the church starting driving stakes and they had over half of them in before it was time for the rest of the men to be there. By the time I had the tent bags in position the stakes were in and all the men were present and ready to work.

They really made quick work of the set up and we all had a lot of fun doing it. We have the full 48x70 tent up this week with both center poles. I have not posted many pictures of the whole tent going up and I want you to see it. Odie took these two pictures Friday but some how I did not get them on yesterday's blog. It really looks neat with both center poles going up. 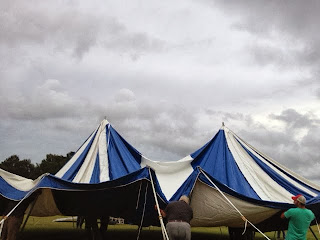 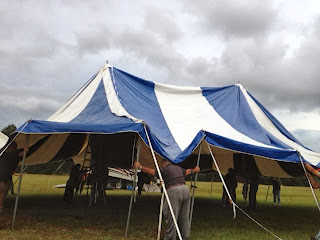 Here is the crazy crew again. 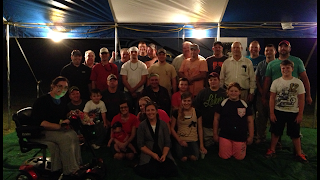 It is a nice tight set up but I always have a few wrinkles in the same blue panel of the center section when it is included. It must be a little irregular because it is as tight as I can get it. You can see it in the three pictures below. 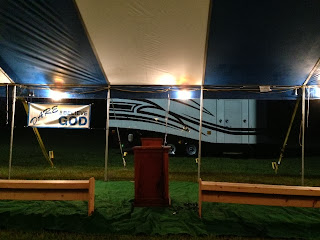 It was storming pretty good Saturday morning so I was sitting under the tent as the sun came up. I like this progression from night to day. 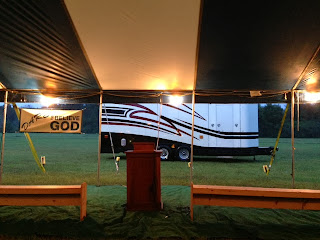 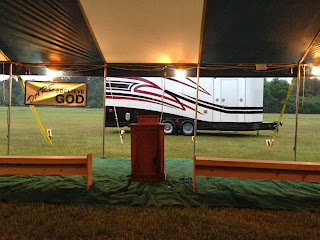 In between rain showers I worked on the bus problem for a while. I hope I have the leak narrowed down but I will concentrate on that Monday if the weather cooperates. 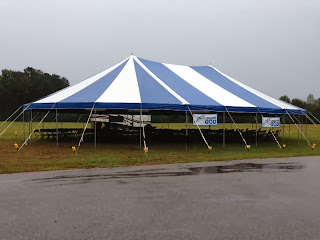 Odie was with the young folks at the church tonight so Bro. Scott brought his grill to the park and cooked me, Kelly Jo and Sis. Kim some fine looking and even better tasting steaks! Wow! They were good. 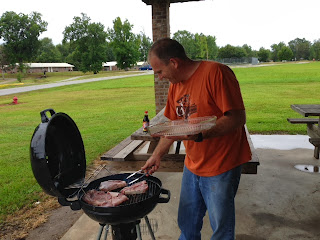 That is one big sirloin and two T-Bones that a family in Claremore, Oklahoma put into the ministry. Wow! 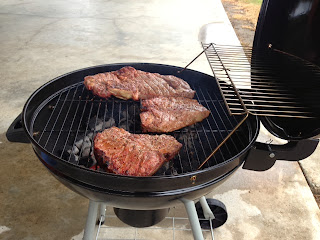 They we so good that I cut a bite out before I thought to take a picture of it on my plate. We had green beans and taters too but I ate every scrap of meat from the T-Bone before I went for the vegetables. I like vegetables but I prefer to eat things that eat vegetables. I like to say I get my vegetable second hand! 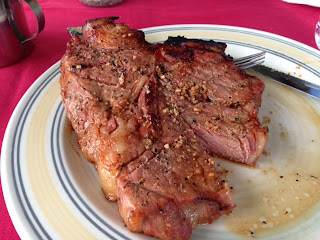 It was an amazing day.


We plan to have church inside in the morning and under the tent Sunday night. Pray for us that the weather will be good for the services. We had an outstanding tent revival here last year and we are expecting bigger and better this week.

Have a great Sunday.