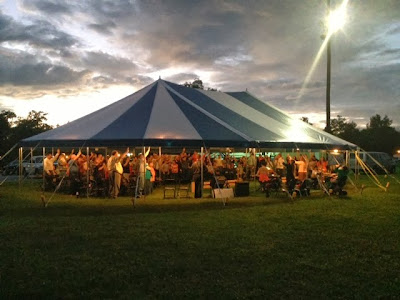 God is still saving folks under the blue and white Gospel tent in Richton, Mississippi!


The services under the tent this week have been excellent. The last two, Tuesday and Wednesday have been super excellent. We have had somebody saved each night and the last two nights several young folks have been in the altar getting saved and seeking deeper experiences in God. It has been simply amazing.

The weather was very threatening Tuesday afternoon and late evening but it settled down during church and the people filled the tent up. Honestly I expected that some would stay away because of the weather but if they did God must have sent two more to take their place. It was a super great crowd.

As I was preaching to the lost I noticed lightening in the sky to the south of us but it was never close enough for us to hear the thunder and it was perfect weather for the great altar service God gave us. I do not know how many were saved Tuesday but there were several. Wow! What a service!

Wednesday I did not get to my text. I "slipped" right into preaching from one of our songs and God gave us another great altar service. I am can not tell you all that God was doing in lives but some of the things I do know are miraculous. I should not be surprised because that is what God wants to do in every life, yet I am amazed each time.

One of the great things that happened in the altar service Wednesday night involved a man that was just passing through Richton. He was on his way from a distant state to some where east and was all alone and discouraged. He had even considered taking his own life yesterday but he saw the sign for tent revival and decided to attend. Under the tent, in the altar, that man found what his heart was searching for all along. He found Jesus! Hallelujah!!!

There is no telling what God will do tonight. If you are close enough to get here, come and see for yourself. God bless you all.