While we were having great tent revival service last week in Richton we were also fighting a coolant leak on the BoggsMobile. I think I mentioned that I added a small amount of coolant on the way to Mississippi from Missouri. I thought the coolant sensor that I replaced in July might be giving me a false reading.

But when I started to leave Ellisville on the way to Richton the low coolant light came on again. I could see no leaks and nothing on the ground. I added 4 or 5 gallons of coolant until I could see coolant in the sight glass before we left Ellisville. That let me know there was definitely a leak but I could not see it any where.

The Aquahot is our diesel fired water heater/interior bus heater/engine block heater. It has its own closed loop coolant system plus the engine coolant runs through a heat exchanger in the unit too. The two coolant systems do not mix although they run through the same unit to heat domestic water. Lost yet? Don't worry it was a steep learning curve for me 5 years ago. 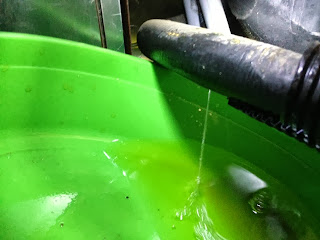 I lost a bunch more gallons of coolant because it just kept running on the ground until I found the source of the leak and turned off the valves back at the engine. I fought with that a few days but I think it is under control now. The leak is not repaired yet because some of the hose is nearly impossible to get to without removing some of the Aquahot. I will deal with that later.

After the tent was down Saturday we drove the bus back to Ellisville and I discovered another leak. This one was very small and it was in the loop that goes forward in the bus for heat. It was a very small leak and I was able to tighten a clamp and stop it for now. I will be keeping a very close eye on it for a while though. I can turn valves off to that if I need to as well. 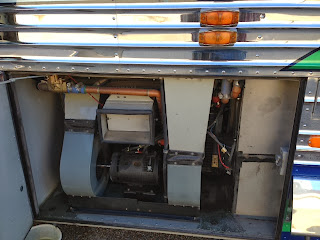 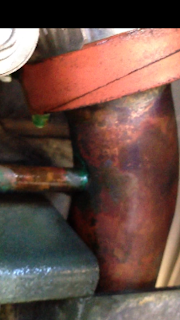 While I was messing with that Saturday evening one of my bay latches quit working. I have one bay door on each side that swings out instead of lifting up. It was a swing out door that quit latching. That means there was no way to keep the door closed while going down the road so that had to be fixed right then. I guess I could have screwed a barn door latch on the outside but I did not think Kelly Jo would approve. 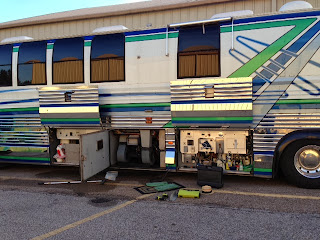 I took the latch apart and found a spring just laying inside. I figured out by trial and error how to attach the spring and now it is holding again. I was racing against the sun the whole time and was putting away my tools as the sun went down.

Some days/weeks owning a bus are not very fun, especially when you are as mechanically disinclined as I am.
But there is a bright side. At least I am not pastoring a church! Praise God!

Posted by Davy, Kelly and Odie Boggs at 6:50 PM