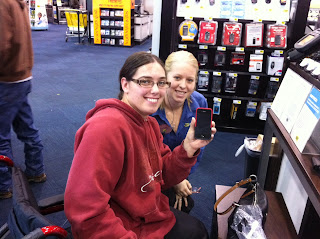 Odie has finally made the move to an iPhone! She bought an iPhone 4S last week. She made up her mind to buy one in Iowa but nobody had one. She called all over southern Ohio thinking she could pick one up the few hours we we going to be there before flying out. She found none around home. She called the Walmarts and AT&T stores in Montana with no success.

When we arrived in Montana Bro. Nathan Jeffreys told her that Best Buy had plenty. (Bro. Nathan is a member of the Best Buy Geek Squad) We went in on Monday and finally bought one. As a bonus, there is no sales tax in Montana so she saved some money there. She is so happy to have it.

Her first smart phone was a Blackberry Storm (Four in one year) then a Droid X that lasted one year. I kept trying to convince her to buy a real phone and now she is so glad she did. The camera is really good. I took some pictures with it right along side my iPhone 4 and her pictures were very noticeably better. It is faster as well and has some great new features. We hear that some people are having trouble with the batteries but hers seems to be OK.

She also switched from Verizon to AT&T and joined our family plan so she will save quite a bit of money as well. That is always a good thing. Her number stays the same so if you have her number you can reach her as normal. She is covered by our unlimited texting and calls to and from mobile phones so call and text away!

Welcome, Odie, to the iPhone family. It's about time! Lol

Davy
Posted by Davy, Kelly and Odie Boggs at 3:50 AM