You may remember that the Monday we left Wichita we had to drive in terrible cross winds all day long. Every moment of driving was a strain and at the end of the day I felt as though I had been beaten with a baseball bat. My whole body was sore.

Unfortunately, I was not the only thing that took a beating. We lost another Air Conditioner cover. This time it was the third one from the front. Can you see it missing? 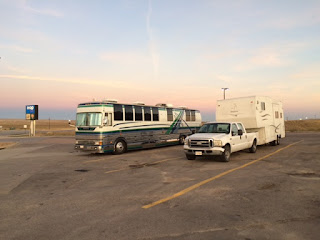 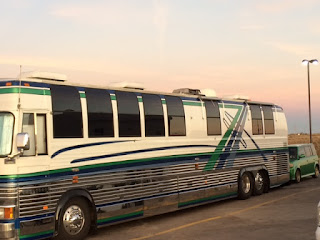 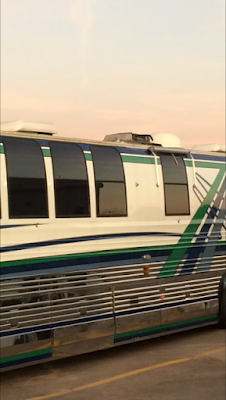 Losing an AC cover is a nuisance and an inconvenience if the weather is going to be clear with no precipitation. If there is rain or snow in the forecast, it becomes and emergency. I ordered one from Amazon Prime on Tuesday and they guaranteed delivery by Thursday morning. After the order went through the deliver date changed to Friday evening.

Every day with the AC uncovered means a little more chance for water going inside the BoggsMobile so I sent an email asking about the delay. (Is this the new Prime THREE day shipping?) Some one emailed me right away and said they had upgraded to overnight shipping and it would arrived on Wednesday. Cool!

No, not cool. It did not arrive until Thursday afternoon. Since there was a forecast for rain and snow Thursday about noon, we had to cover the AC with a tarp. We did not have a ladder handy so I lifted Kelly Jo up through the escape hatch and she had the tarp on in a few minutes. 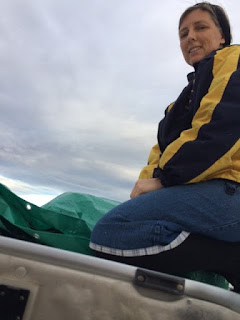 She is a good kid! 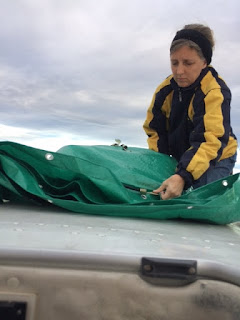 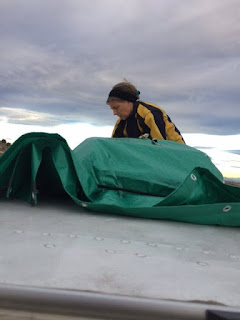 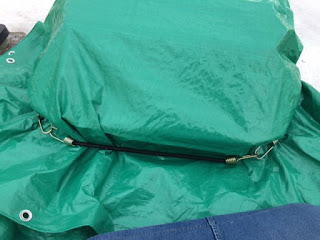 We have not had good success with AC covers since we installed the four Air Conditioners in November 2009. The number four air cover (back) has never been replaced but the front three covers have been replaced several times. I need to go through my records and figure how many of these covers I have purchased the last 8 years.

We knew this third one was on its last legs in March of 2016. 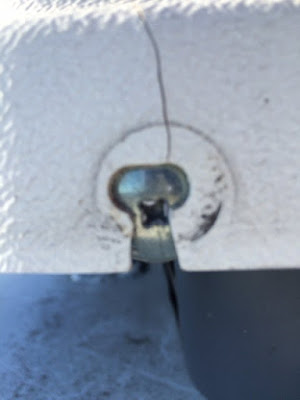 We put screws with washers to compensate for the cracks and then taped the cover on too. You can read about that HERE. I have been on top since then and checked the screws in all of the covers and taped the front three covers.

The high wind driving between Wichita and Colorado must have been the final straw.

The new cover was delivered Thursday afternoon and Saturday in Colorado was warmish (45?) and no wind. It was the perfect time to put it on. Kelly Jo handed me tools from the inside hatch and Bro. McCoy handed me the cover, took pictures and laughed at me! I guess we made a good team because it is now installed. 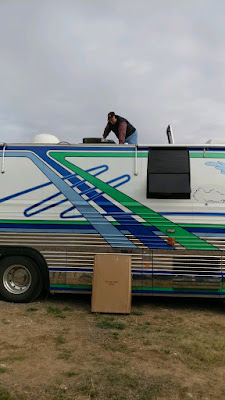 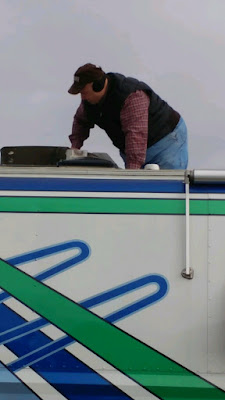 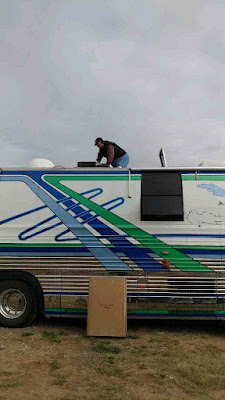 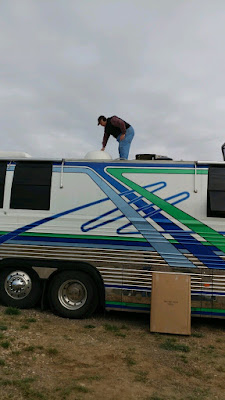 The cover was sent without replacement screws. Amazon compensated me for the missing screws, but thankfully I did not need them ... yet. Three of the screws were still in place. The forth screw was out and rolled backward on the bus and became lodged under a wire. You can see the wire on the left in the picture below, indicated by the very artistic arrow. 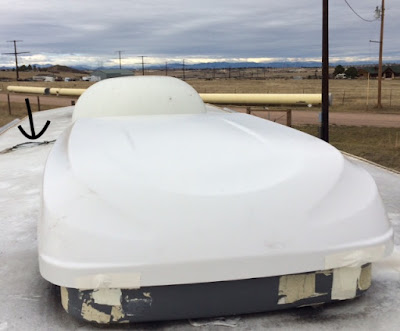 It rode there for no telling how many hundreds of miles and that is the second time that has happened. I will pick up another set of screws because I never know when I will need them, but I will need them.

Here is a funny concerning this AC cover. You may remember we stopped at Colaw RV Parts the previous Monday while going from West Plains, Missouri to Wichita, Kansas. Kelly Jo and Odie asked me if I thought we should by an AC cover there. I said, no, I checked them all a few weeks ago and I hate to carry a very fragile plastic cover for months and never use it!

I guess I could have carried it a week though!😇

I lost a front AC cover a few feet before the Colaw exit in December 2015, stopped and purchased one for only $80! I commented then on the blog that things do not usually work out so well for me and I guess I just had to prove it this time!

Well, at least we are covered.

Davy
Posted by Davy, Kelly and Odie Boggs at 1:52 AM