House Update: A Little Closer On The Inside

We made some encouraging progress on the house while we were home for the wedding last week. Odie was tied up with her responsibilities in the wedding but KJ and I devoted most of each day to the house.

Thursday I posted pictures of the doors being trimmed. 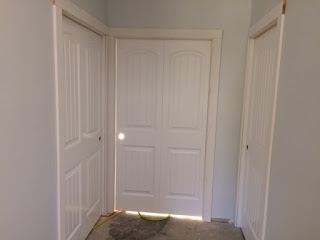 Those are all done and I also installed all of the base that could be finished in the house too. I did neglect to take a picture of the base though. The good news is that I did manage NOT to nail into any pocket doors while installing the base. All the pocket door walls require shorter nails and I scolded myself into remembering the shorter nails every time. I definitely surprised myself!

We used the same primed 1x4 pine for base that we used as casing to give the house the simple beach cottage look that Odie is after. I squared all the corners as I did on the casing. It looks good but my father-in-law will make it look marvelous with his caulk and paint expertise, as he has everything else.

There are a few small base pieces that need something else in place before they can be nailed and none of the trim in the garage is finished. The garage is being used as a staging area so the walls have not even been primed as of yet. That can all be completed later.

I had some PVC board that I cut for a backing board for the light next to the front door. Dad installed all of that on our last day at home. Kelly Jo and Odie picked a great light and Dad put it up perfectly. 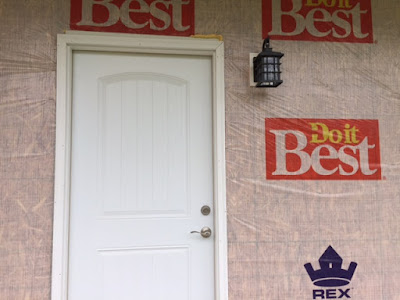 I mentioned last week that Dad hung two of the pendant lights. 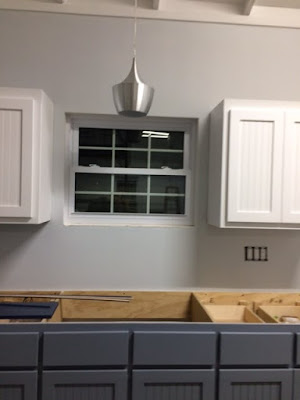 Friday Dad and I hung the last three pendant lights over the kitchen island. They really look nice. Kelly Jo and Odie found these at Home Depot. They are very light weight and seem well designed, at least hanging them was pretty simple. They will have LED bulbs like everything else in the house. 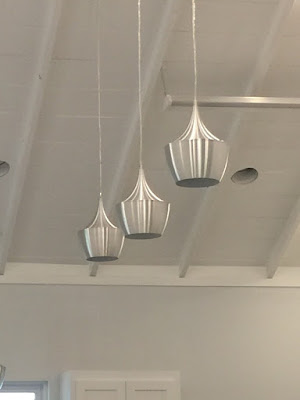 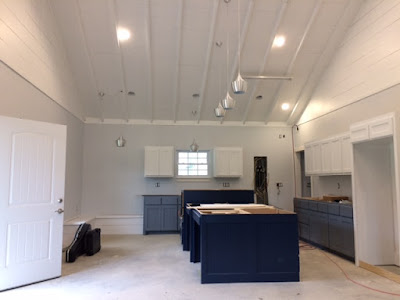 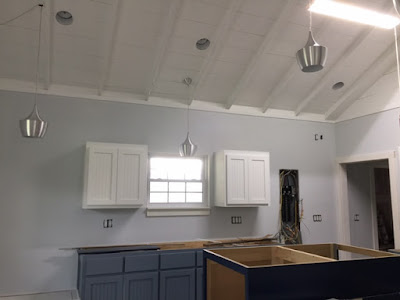 Kelly Jo and I went to Menard's after wedding rehearsal Thursday night to buy the LED can light trims we wanted for the living room/kitchen area. We needed 18, but they only had 12 in stock. We purchased the 12 they had and ordered some more. These trims are rated for 50,000 hours, 925 Lumens, light up instantly, are 3000k warm white and only use 14 watts each. Plus they were on sale for just under $10!

14 watts per recessed can light and there are 18 can lights in the kitchen/living room. That is 252 watts for all of those lights. To put that into perspective, only three 75 watt lights would be 225 watts and all 18 lights would 1350 at 75 watts each. LED's really make a big difference in energy costs.

Our goal for the day was to finish all the high work so that we could remove the scaffolding once and for all. 12 trims allowed us to complete all the can lights that required the scaffolding. 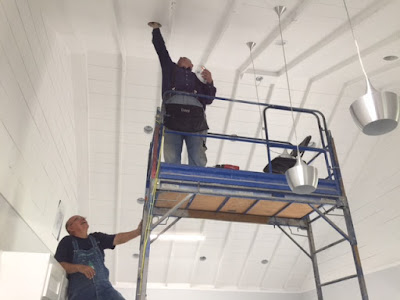 The picture below is looking up at the peak of the ceiling. 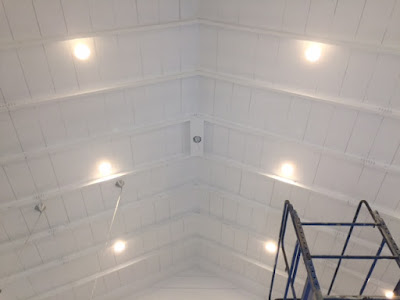 I had built a wooden box around the certified fan box but I really did not like the look of it. Once my father-in-law was finished working his paint magic, I liked it a whole lot better. You will see the fan mounted on it a little farther down the page and that makes the box look great!

The ceiling fan is the project that Dad and I conquered next. Odie had picked out the fan a few months ago and Dad and Mom had purchased it. It was not fun to put together but we finally did it. I told Dad that we would have to charge $1000 a fan if we were going to make any money putting up fancy ceiling fans.😊 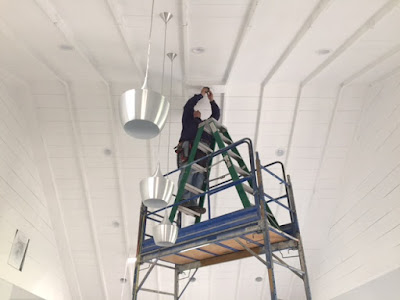 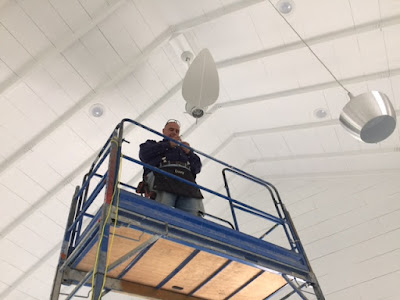 The fan, the pendant lights and cans look fabulous. The fat guy on the scaffolding with ripped jeans from running base that morning, not so much! 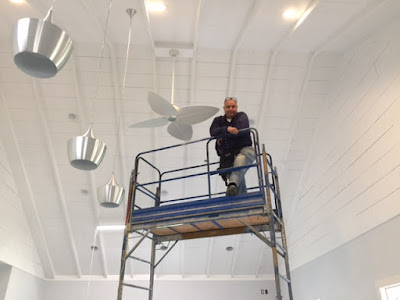 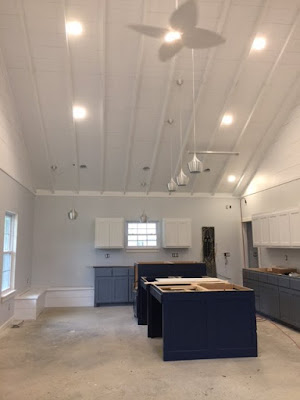 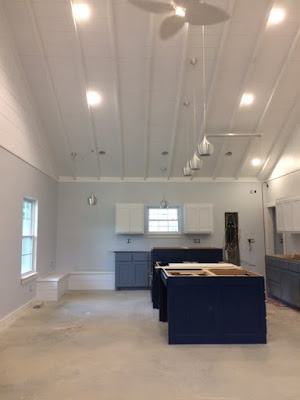 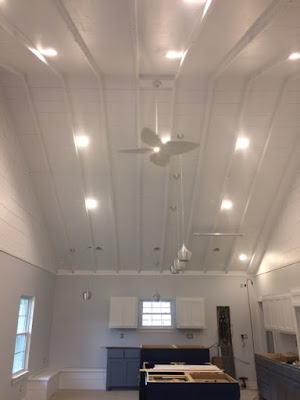 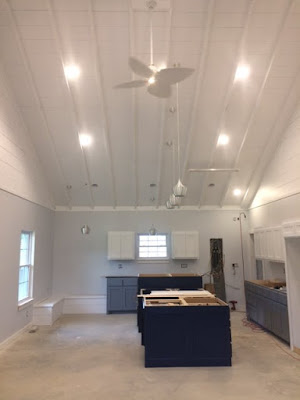 We reached our goal that day, finishing all of the high work. Kelly Jo and I disassembled the scaffolding and took it down. It had been up since early June when we began the electrical rough in.

A bunch of folks have asked how long it will be until the house is completed. Time wise, I can not answer that. We are trying to avoid major debt so the timing is dependent on a lot of factors.

If you say all of that real fast it does not seem like much.😀 Praise God we are as far along as we are in this. Bro. Shobanke tells me, "What God has started, He will finish!"

Thanks for dropping in today.

Davy
Posted by Davy, Kelly and Odie Boggs at 6:15 AM