Replacing The House Batteries In The BoggsMobile

We have been on the road this week and we are expecting to arrive in Fayetteville, North Carolina later today. Bro. Jimmie is already there and is working hard to get the lot ready and making last minute preparations. Hopefully we will have pictures tomorrow of the tent going up later today.

This blog not only serves to keep our family and friends informed but it is also a good record keeping device for me. I often refer to the blog to find out when I did "this" or "that" to the bus or when exactly we were in No-Where, Kansas or whatever. Today's blog will be one of those record keeping blogs.

I first changed the BoggsMobile house batteries while in tent revival in Miami, Oklahoma in June 2012. It was one of the hottest weeks we have ever had the tent in the air and it was the only week I could change the batteries. You have to turn off all the power to the bus so there was no air conditioning. It was a bad job at a bad time but by the grace of God, I did get it completed. You can read about that change over HERE if you want.

The house batteries are an important part of the bus electrical system. They run all the house electrical when we are going down the road. Without them we would have to run the generator every moment we are not plugged into 50 amp power. Take this week and next week for instance.

We left Richton Sunday afternoon and have not plugged into power since. The bus will probably not be plugged into power the whole time we are in Fayetteville if we are able to park at the tent site. With good batteries we will be fine.

Now for the actual battery change.

These are not regular lead acid batteries and lead acid batteries can not be used in this application. With the inverters and the design, the batteries need to be AGM type batteries. Our bus has eight 4D batteries. They weigh about 125-135 pounds each and they must be mostly gold, according to the price. The house batteries were originally Lifeline brand which is the acknowledged leader in AGM batteries.

The only problem with Lifeline batteries is the price. I have an acquaintance that is a Lifeline dealer and he offered me a great price back in 2012. Even with a great price, they were still out of sight. Through another friend I was able to buy his private label batteries at his wholesale price. I saved about $1500 total and that was the tipping point.

The private label batteries are actually Deka batteries and they have a two year warranty and an expected 2-4 year life span in an application like mine. The Lifelines are more expensive than the wholesale Dekas, but they are guaranteed for 5 years and many folks get more life than that out of them. When all was said and done I decided to save the money up front and I put in the Deka batteries back in 2012 hoping for the best.

The verdict is in. The Dekas lasted four years and three months. Looking back, it was actually four years and two months before I started having trouble, I just did not know the trouble was caused by the batteries.

In early September we started seeing some erratic voltages. Both inverters monitor the battery voltage and I glance at it several times per day. One moment it would read normal and within minutes it would read way too low and then right back to normal.

I suspected a problem with one of the 4000 watt inverters. I emailed Jeff from East Tennessee Luxury Coach and ask if he could take a look at the whole situation on our way through to Mississippi in late September. He said to come on in.

The verdict was the batteries. I am still not entirely certain that both inverters are 100% but they are functioning right for the most part. One of them is not cooling properly but I have since corrected that. I will save that for another day.

However, there was no doubt at all about the batteries. When we opened the compartments to see them, it was obvious they were at the end of the road. They were swollen and were gassing pretty badly.

We had thought the previous three weeks that our gray water was smelling too strong. That happens from time to time and I give the gray tank a good rinsing or two. This time it was the batteries all along. That is not good at all. The old batteries had to go.

You access two of the batteries here. The inverters are on the left and the Aquahot is on the right and two batteries straight ahead. 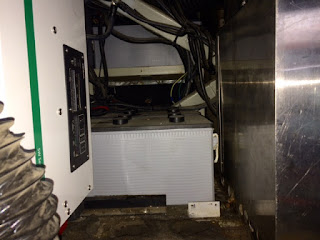 You can see in the picture above that there are batteries beyond the first two. Those six batteries are accessed from the first bay on the other side of the bus. There are three on the bottom and three on a rack on top.

This a picture of the old batteries right after I installed them in June 2012. 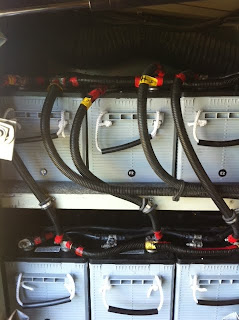 The Lifelines arrived on Tuesday afternoon. 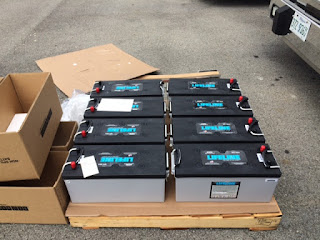 Since I had ridden in this rodeo before, I had some of the prep work completed and they jumped right on the install. 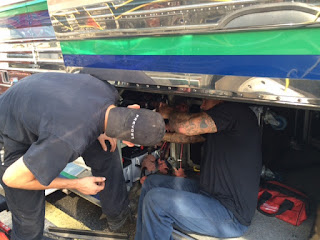 Here are the six installed and hooked up on the rack on the passenger side. 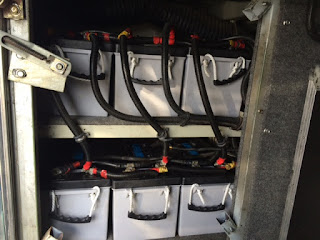 Here are the old batteries. If you zoom in, you can see they are "'swolled" up and ready to burst. 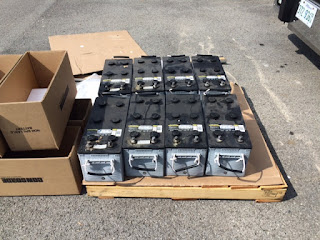 Jeff's guys had them in before quitting time that evening but Jeff suggested I stay over night to make sure the inverters and the new batteries were working properly. I am happy to say that all was well the next morning and all seems well now.

You do have to reprogram the inverters after you have shut them down completely. That was a major hurdle for me the last time. I had no clue what to do or how to do it. A man I met on Prevost Community from North Carolina called me then and walked me through the whole process in advance and then again on the day I was doing it in 2012.

Due to his kind assistance, I was able to do it then. With that experience, this time it was a breeze. I think it is amazing how God sends the right help at the right time. That causes me to thank God for Jeff Rowe once again!

I have actually had another bus problem since the battery replacement and I will post about it later too.

Davy
Posted by Davy, Kelly and Odie Boggs at 6:30 AM