This weekend could be summed up with a series of T's. Tent, Travel, Trouble, Triumph and Travel some more. That could do it, but I will flesh it out a little more than that for you, just to make it fair.

We concluded tent revival Friday night with another good altar service. Several men and women from the community prayed during the revival and Friday topped it off well. After service the folks that were there helped us fold the chairs and I stacked them in the trailer. Others helped Kelly Jo with the sound equipment and we put some of that in the bus and some in the trailer.

I was not feeling well after church Friday night so I was very glad when Pastor Hayden volunteered to watch the tent for a few hours. It was a great help to me. He stayed until 2:00 AM then Kelly Jo took a two hour shift and Odie took a three hour shift. That gave me most of the night to at least get some fitful rest on the couch.

When the girls watch the tent, they sit in the front seats of the bus and watch out the window. I sleep behind them on the couch in case they need me. They do a super job and I am very glad to get a few hours of rest.

Kelly Jo spent Saturday morning at the laundry mat and I used the time to get the trailer mostly emptied and the tent ready to come down. By the time folks started arriving after noon I had the lights down, the cords down and all the hardware I could take down.

We started at 1:00 PM and by 2:15 the tent was folded, trailer was packed and I was preparing to drive Bro. Jimmie's truck and trailer to the church. I made it fine in his big rig and hopefully it will be safe and sound when he arrives later Monday morning.

We went back to the bus and in an hour or so we were ready to ride. I wanted to get off that lot as quickly as possible and travel a ways down the road. Bugs of all sorts had invaded the whole area and we were anxious to saturate them with our absence. Bro. Hayden thinks the bug-invasion was caused by all the flooding from the torrential rains before we arrived.

I still was not feeling the best so Saturday night's sleep was restless again but I did get some sleep. I am very glad I did not accept invitations to preach Sunday morning. That could have been miserable for me AND the church. I was up early and out walking the WalMart parking lot and the nice cool morning was very refreshing.

Odie's birthday was a week ago Friday and since the tent was up, we did nothing for her except for the good sauerkraut meal. I did not even leave to buy her a birthday card so I took care of that in WalMart Sunday morning along with some hot pretzel bites from Auntie Anne's. She was well pleased.

I had more in store for her as a birthday surprise. I intended to take her to a special concert at a church about three hours away and not tell her where we were going until we pulled in the parking lot. We were humming right along when I heard a massive air leak erupt under my feet.

I instantly looked at my gauges and the air pressure was holding fine. Evidently the pressure could be maintained by the engine compressor in spite of the leak as long as we were moving. I decided to try to make it to an exit with truck stops 8 miles down the road, rather than stop on the narrow shoulder.

I made it to the truck stop but after I touched the brakes, the air pressure could not recover. I went outside and opened the compartment under the driver's seat and this is what I found. One of the 1/4 inch air lines was split. 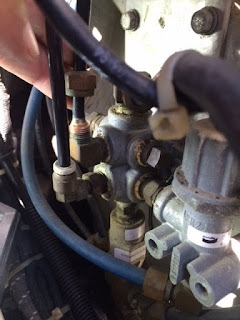 In these pictures I have loosened the nut and the line is split on the back side. It was split at least and inch. 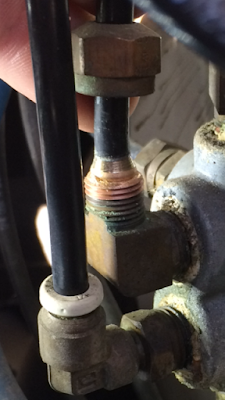 I talked to Jeff Rowe and Ben Isaacs about my options but I did not have many options besides finding the fittings and fixing the line. I tried some rescue tape but it did not seem to slow the air down much. It did make a nice whistle though. 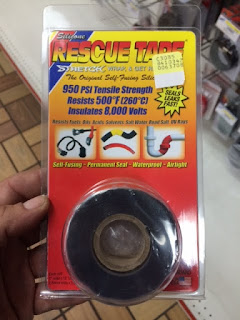 The compressor would hold the pressure while the bus was running but it would not build it up. Plus the passenger side rear leaned way over after Kelly Jo shut down the bus. This was obviously bad and we were grounded.

It was time for decision. There was no way to wait two hours on the repair guy and make it to Odie's surprise concert in the bus. I decided to tell Odie about the surprise and send Kelly Jo and Odie ahead in the car the last 155 miles. I figured  there was no sense in all of us sitting there being nervous.

The mobile repair guy came a couple of hours after I talked to him and less than 11 minutes after he arrived, the air line was repaired. I knew it would not take long for the right guy. All you need are the right parts, right tools and right knowledge.

Well, all I needed was a "little" money and I was ready to go. I am thankful it worked out good. We could have easily been there until some time today.

I made it to church about 30 minutes late. Odie had a great time enjoying her surprise but I will let her tell you about it on Saturday.

We left after church and drove about 100 miles and stopped in a rest area for the night. I am writing this late Sunday night and I am hoping for a very good sleep tonight. 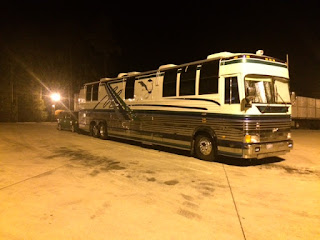 That pretty much wraps up our weekend. Thanks for reading.