We are having a great time in Oklahoma City this week. The tent revival services have been well attended and God has been reaching for the folks in the community. Tuesday night I could feel conviction even before the service began. The love and grace of God are amazing. Thank you for praying for us and tent revival.

I kept busy while we were home with a few things that needed attention on the BoggsMobile. One of the first projects I tackled was the rub rails on the side of the bus. I had three that were pretty loose. I removed the brackets and then took it all to Dad's barn. 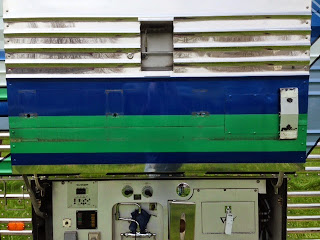 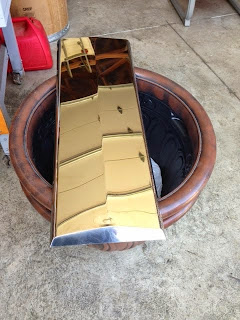 Dad and I cleaned all the adhesive off the brackets and the rails. That was the biggest part of the job. Although some of it was obviously coming loose the rest had stuck for 19 years and was not about to come off without a fight. 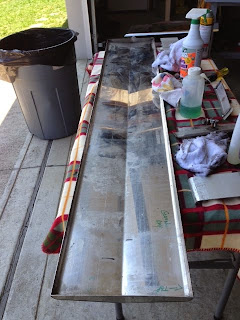 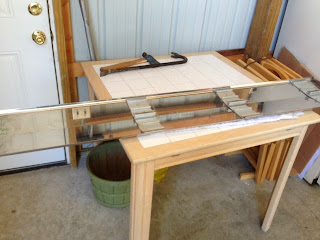 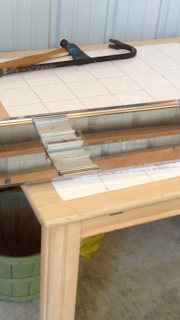 After they were clean we applied the proper adhesive and clamped the brackets and rails for nearly 48 hours. The two long rub rails fastened perfectly but the short one not so well. The brackets on it were not  as wide as the others. It looked like they were fabricated at the converter and had obviously been glued at least twice before. An acquaintance on one of the Prevost forums had two of the proper brackets and he sent them ahead of me to OKC. 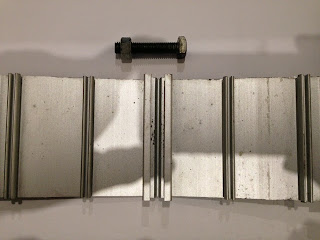 I found the bolts locally so all I have to do now is get all the old tape removed and put it all back together. 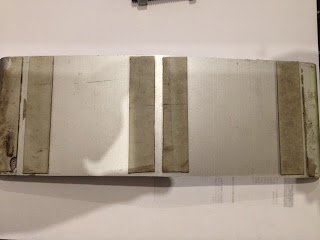 Here are two pictures of the bay doors with and without the rub rails.

With the rub rail removed 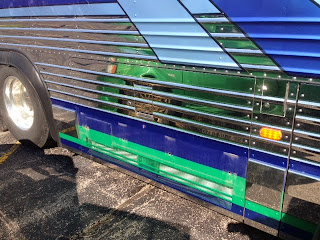 With the rub rail reinstalled 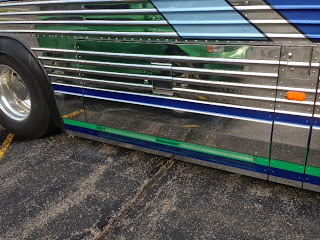 I had to remove the interior door panel to remove the rub rail on the outside of the door. The original panel was in very bad shape. We recovered it with some new material and it looks great. The door originally had quite a bit of fancy work but is was looking worse for the wear and it looks much better now. The old covering was thicker too and once we had the panel off we noticed the door was much easier to shut. We added less padding on the replacement and now is shuts better than ever. 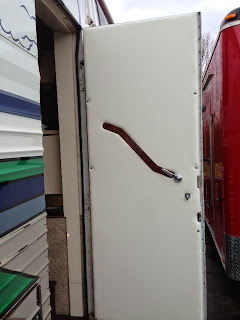 All the stars aligned to try to repair the remote spotlight on the front of the bus the last Wednesday we were home. There were several elements that had to be in place in order to do this. The front of the bus had to be in a lowered position and it is here at Dodds. I wanted a hard paved or concrete surface for the ladder.  I had to have the tent trailer handy because that is where I keep the big ladder. I need no rain and time. Then I had to actually think about doing it. All of those things came together so I tackled it.

We had several electricity spikes at one church a few years ago and several things went haywire that week. One of those things was the spotlight on the front. It turned itself on and would not turn off. The remote control would not work it at all and there is no other switch. With every breaker off, every fuse pulled and every switch in the proper position it remained on.

Finally a friend climbed up, took it apart and unplugged the light. With it unplugged we tried resetting it with the remote like the destructions said but no change. We left it unplugged ever since that time. I intended yesterday to remove the brain of the thing to see if it was fried and try to find a replacement.

However, when I plugged it up ..Voila! All the controls were working. The light switches on and off properly, the remote moves the light side to side and up and down. We are now back in business. This light REALLY comes in handy pulling in some places at night. 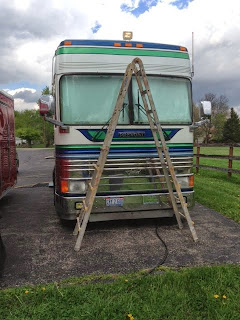 Other than replacing the tag tires, all the rest of the projects were just piddly stuff but I was glad to get some of it completed. It is just like owning a house, there is always something to do.

Davy
Posted by Davy, Kelly and Odie Boggs at 5:37 AM