Odie's post went up late yesterday. She had it ready Friday night and I scheduled it for posting Saturday morning but for some reason it did not go live. We were all busy with the tent set up most of the day so she did not mention it to me until Saturday evening. It was a great post so if you missed it you can go back and read it HERE. My apologies to Odie Podie Pickle Hymer Schmidt.

Travel Day From Nebraska to Illinois

A Tribute To A Friend

Gearing Up For Tent Revival

Travel Day and Revival In Omaha

Here is the view front seat of the BoggsMobile at the Walmart Supercenter in Champaign, Illinois. 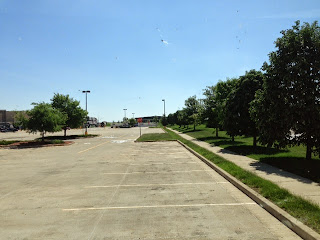 From the front door looking toward Outback and Hometown. 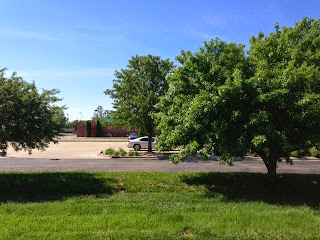 The BoggsMobile and Green Machine in the WalMart Parking Lot. 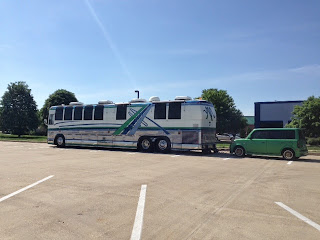 After a pretty good night's rest in Champaign, Illinois we zoomed over to Indianapolis and picked up the trailer. It was parked at Shelby St. Pentecostal Church for the last three weeks and it was just as we left it. I appreciate Pastor Carlos Burdine and his folks for allowing us to park it there. 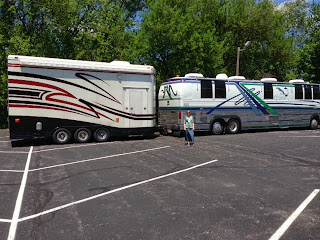 We were definitely on a roll but things pretty much went haywire from there. It was only two turns and a few miles to the four lane road that would carry us south toward Bedford.  I had scoped out the road and turns on Google maps and it looked great. We were almost to the four lane when the road suddenly closed with no prior warning.

We were at a very narrow intersection and I had to turn right or left. I could not go straight on the road we had planned. I chose to follow the detour signs and turn north and look for a road that could take me either west to the four lane or east which was the direction I had came. I was hoping it was leading me down a road I could get through with the bus and trailer.

That very first turn was pretty hairy. Everybody had to back up for me to get through but the fun part was yet to come. The detour came to a T and I had to turn left over an impossible for me to cross rail road track or turn right at an impossibly narrow road with signs, guard rails and telephone poles. I could not cross the tracks so I "chose" the right turn.

I pulled completely in the left (wrong) lane and waited my turn. Everybody had to back up quite a ways and I cleared a telephone pole with only inches to spare. The BoggsMobile would have been close by itself in that turn but the tent trailer was incredibly close!

Then I had to back track several miles through very heavy traffic. By the time I was headed south again I had probably lost 40 minutes and my nerves were pretty much shot.

We pulled into Springville about 5:00 PM with no trouble. In just a few minutes the Green Machine was unloaded from the trailer, the trailer was unhooked and put in place by Bro. Lakes and his truck, the bus was parked and the utilities were hooked up.

We did have one more exciting moment. When I opened the panel on the building I found it was inhabited by several wasps. I evicted them and then I noticed I had several larger friends to contend with. They looked like hornets but I could not figure out where they were coming from. Then I noticed the bottom of the panel.

Can you see the nest attached to the panel in the picture below? 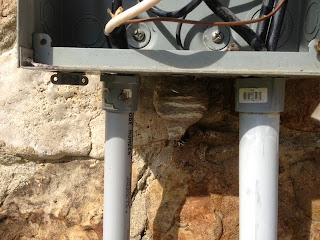 I found a board and crushed the nest, sending several hornets into eternity. I missed one and once he discovered who the enemy was he came straight for my forehead. One very lucky and solid swing of the 2x4 later he was on the ground and my right Croc finished him off. I had a very bad experience with hornets when I was a kid and I do not care to repeat it!

The tent is up in Springville, Indiana. 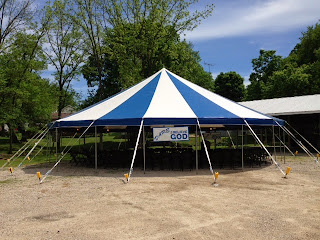 I will try to post some pictures of it going up later in the week. Pray for tent revival beginning tonight.

Posted by Davy, Kelly and Odie Boggs at 1:42 PM