Tent Down But Still Having Church

It was a pretty bad storm that rolled through Oklahoma City Wednesday night into Thursday morning. The rain was hard and the wind was strong. But it really did not seem strong enough to do this. 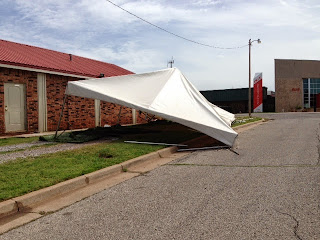 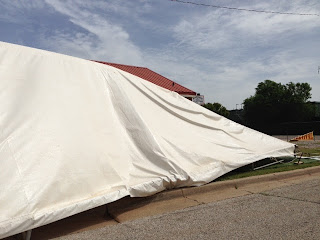 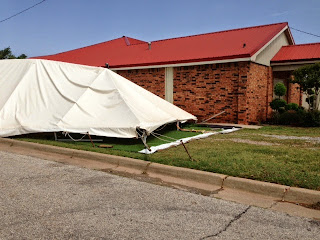 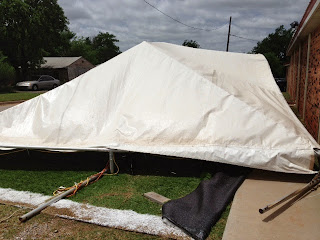 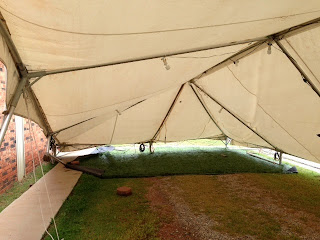 As you can see nearly every vertical pole was bent or completely broken. Some of the horizontal poles seemed bent some too. 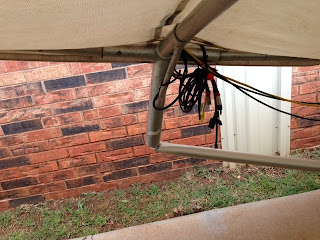 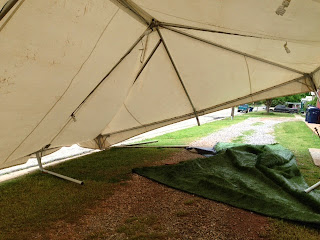 This is a frame tent and it is not designed to take the amount of wind that a pole tent can take. However it should have taken a whole lot more wind than it did if it had been set up properly. Some of the poles did not even have a stake driven next to it and the ones that did were driven right next to the pole. That is way too close to do much good at all. The tent rental company set it up and told Bro. Rickey to drive the stakes in some if it seemed to loosen up. He did that the day of the storm.

I was shocked that it was still standing at midnight after the first squall passed through. Sometime during the night the poorly set up tent bit the dust. My heart sank when I saw it Thursday morning. I thought about parking the Green Machine under the tent to protect it from hail but I really did not have much confidence in the tent standing if the storm was bad. Still, I was surprised the tent came down.

Even though there was a chance of storms Thursday evening the sky looked clear as could be so Bro. Rickey decided to have an open air service and that is what we did. We had one of the best crowds and had a very good service. I really felt God reaching out for folks and we had good response at the altar service. 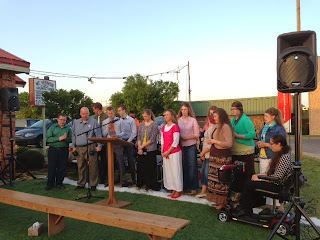 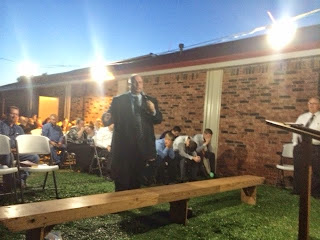 So even though the tent is down God used it all for His glory. We have one more night and if the weather cooperates we will have service in the open air again. Pray for the service tonight. We had several down the street listening in and I would love to pull some of them to Christ before we close this meeting.

Davy
Posted by Davy, Kelly and Odie Boggs at 5:39 AM