Travel Day and Revival In Wichita

Several folks have noticed we have not been posting on Sunday much lately. That was a deliberate change. Last year we put up more posts than any other year. We averaged one per day at 367 posts for 2013. After we were a few months into last year I noticed we were putting up good numbers so I thought I would see if we would post at least 365 times. We did and that was that.

I use the pronoun "we" very loosely because Odie had fallen way behind in posting much at all. So at the first of 2014 I made two deliberate changes. I dropped back to posting no more than 5 days per week and Odie started posting nearly ever Saturday. It has been working very good and the feedback has been positive.

The only negative comment we received was from a few folks that read the blog every day and missed having a new post to read on Sunday morning or before they go to bed on Sunday night. That is OK, it is nice to be missed.

Recently I thought of a way to post on Sunday without a big time commitment. Actually I had considered this quite a while back but could not find a way to fit it in and let it slip from my feeble mind.

I take a lot of pictures from the driver's seat when we are parked but I hardly ever post them. On Sunday I will give you the View Out The Front Window. I will try to take a picture from the driver's seat and from the front door and maybe a picture of the BoggsMobile every place we spend the night. Some weeks that will be pictures from one place and other weeks it will be more.

Here are the first pictures. The front window this week is overlooking a farm field from Pine Grove RV Park near Greenwood, Nebraska. It is a beautiful place. 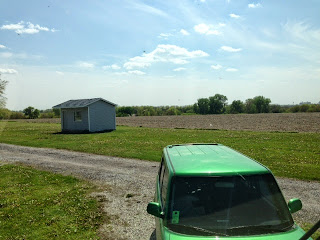 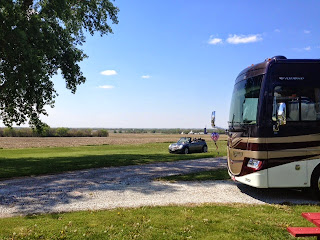 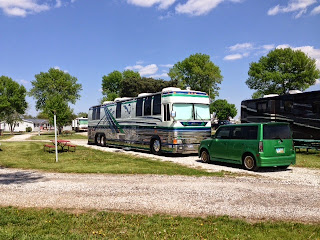 This 1995 Prevost XL Liberty conversion is parked two spaces down from us this week. It is the same year as the BoggsMobile and is in fine condition. It really looks good. 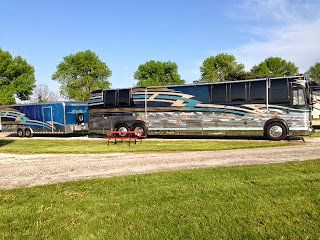 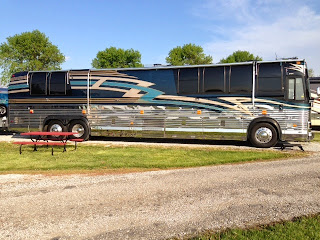 Posted by Davy, Kelly and Odie Boggs at 6:00 AM

Email ThisBlogThis!Share to TwitterShare to FacebookShare to Pinterest
Labels: View Out The Front Window