ATT is almost non-existant here at Forts Lake and Tuesday it was gone. I could not get pictures for Vintage View Vednesday to post last night so I wrote an update about our schedule. I tried to get it to publish for probably 30 minutes and then it went through a little after midnight, I thought. This morning I started hearing from people about "no post" and realized, it did not go up. Oops!

I repent in sackcloth and ashes. MAYBE it will go up now.

A Schedule Adjustment
Our schedule is never written in stone, more like written in jello. Although we make commitments with the full intention of following through, some things can not be helped. Thankfully this time it is minor.

Both vehicles have needed a little tweaking this week.

You may also remember that by October 20, the battery was showing signs of weakness. We have lost count of how many times it has needed to be jumped since then. We finally purchased a 12V jump box. We have used it at least six or seven times and we love the convenience of that.

Not only do I think the new battery was defective, but it was not near as many cranking amps as the previous battery. I took the car back to Pep Boys Monday to tell them about the battery and found that they do not sell a battery with more cranking amps. They said that if I could find the battery that I wanted, they would refund my money.

Done and done. I picked up the new battery Tuesday, changed it out and took the old one back to Pep Boys. 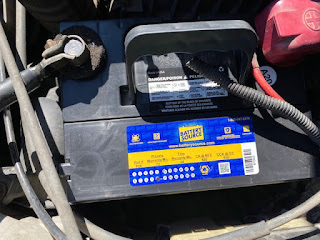 The BoggsMobile
We have been hearing very intermittent and brief sounds from the front brakes on the bus. When we had the oil changed in Pendleton, Kentucky Thursday, I asked the guy to look at the brakes as he was greasing everything. He said the rotors and brakes looked good.

Saturday morning between Richton and here we heard the sound louder and more consistently with braking and a little bit of sound after the brakes released. When we arrived here, I inspected the wheels from the outside and found lots of brake dust on the driver's side from wheel. 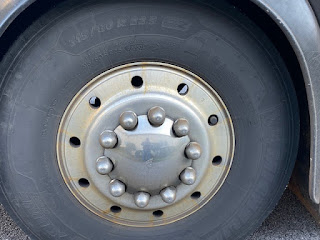 I was hopeful that the problem was simple and a change of brake pads would rectify it. Monday morning I went to Mike's Truck and Trailer Repair. The owner is the brother of some dear friends of ours and he has a great reputation as a mechanic. He came to the church Monday afternoon with one of his guys and removed the driver's side wheel.

It turns out the caliper has failed and the back side of the rotor was eaten away. 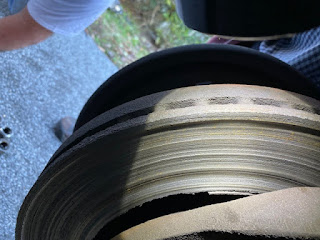 He said they could change everything out if I could get the parts from Prevost. I immediately called Prevost and they found everything we need in two cities. The only hitch is that bus brake parts are heavy and overnight and 2nd-day air shipping was cost prohibitive so it will be the end of the week before the brake parts are here.

We were scheduled to be in Sterlington, Louisiana Sunday morning so I called Pastor Tracy Boyd to discuss the possibilities with him. He suggested beginning Wednesday night and running through Sunday morning. After finding out for sure that the parts will not be here until at least Friday, I called Bro. Tracy Tuesday and we made the change.

I appreciate Pastor Boyd for being so kind. He evangelized for several years so he knows that these things can not be helped. AND the truth is, they can not be helped. It has taken me many years to admit that to myself and let the things I can not control roll off my back and into the hands of God.

So, we have adjusted the schedule and we are rolling on. Meanwhile, we are still struggling with sickness, but we are having an excellent revival. Praise God for His help.