What I am reading right now
War is always a waste of human life and human potential. It is always horrible and the human cost is deplorable. WWII was particularly painful in the unbelievable numbers of lives lost in every single country that was involved.

There were horrible loss of lives in every category, soldiers, prisoners of war, members of resistance forces and civilians. Every race, every language, every religion and every generation suffered because of the awful war that covered the globe.

In Monday's post, I focused on one small corner of Poland and the unbelievable suffering that was inflicted upon humanity and the staggering amount of murder that was perpetrated there. Auschwitz-Birkenau, the German extermination camp in eastern Poland will stand throughout all of history as a black mark of hate, hostility and evil.

Auschwitz-Birkenau is certainly not the only horrible place filled with vile hatred in WWII, but the numbers of the dead it produced cause it to stand out above the rest as a monstrosity of evil unmatched in all of the debaucheries of its time.

I have wept and wept the last several days as I have read the stories of survivors and those that did not survive. I have been amazed at some of the comments on these stories. Many of them are too vile to print. Here is a mild comment.
Why celebrate the liberation of Auschwitz-Birkenau on January 27, 1945, after 75 years?
Why not let the memory die and the pain cease?

That kind of thinking is almost incomprehensible to me. We must never forget that kind of evil. We must continually remind mankind that unrestrained evil, unfettered hate, uncontrolled sin will bring us down to the basest level of human existence.

As I quoted Monday, Roman Kent, an Auschwitz survivor as he spoke five years ago at the 70 anniversary celebration of the liberation, said, "We survivors can not, dare not to forget the millions who were murdered. For if we were to forget, the conscience of mankind would be buried alongside the victims."

Brothers and Sisters, we can not afford to kill our moral compunction and bury our conscience. A thousand times no! There is good in the world. There is evil in the world. And we must constantly remind ourselves and others that there is a drastic difference between the two.

Isaiah 5:20 Woe unto them that call evil good, and good evil; that put darkness for light, and light for darkness; that put bitter for sweet, and sweet for bitter!

How do we get confused about what is good, what is evil? Is that darkness I see or is it light? Is that bitter to my taste or is it sweet? There should be no confusion about polar opposites, but the world around us is confused.

That is why I write about these things. War may rise as the result of a series of errors or mistakes, but when men devise plans to kill other men and make them suffer in the most degrading ways while they die, that is not a mistake or an error. The is evil, pure evil.

During many hours of research and reading over the last few weeks leading up to Monday's post, I learned of a new book published in 2019 about a man that was purposely captured so that he would be put into Auschwitz.

Witold Pilecki was part of the Polish resistance and he was assigned to find out all he could about the purpose of Auschwitz-Birkenau and to form a resistance cell inside the camp. He assumed a fake identity, put himself in the path of a roundup and within days he was in Auschwitz.

Within minutes of arrival, he knew he had made the biggest mistake of his life. The atrocities that were inflicted upon prisoners were so unspeakable that he barely believed he could even survive, much less smuggle out information or form a band of resistance inside the most horrible place on earth.

Witold kept meticulous records and the Polish underground and the British government were informed of his secret reports from Auschwitz. I dare not attempt to tell his whole story here, but after the war, he resisted the Soviet occupation of Poland and was arrested and executed. The world did not know the extreme sacrifices he had made.

His story and all of the records were kept under lock and key by communist Poland until communism fell in 1989. The book, The Volunteer, was written by Jack Fairweather after five years of painstaking research and hundreds of interviews. 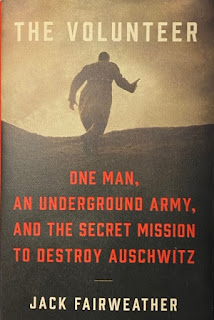 The Volunteer was published in 2019 and I am reading it one chapter at a time now. The book is intense and it is gut wrenching. I would not recommend it for young people without the supervision of a parent, but it describes hatred and evil in a way that most of us should read.

I bought a hardcover on Amazon for $21, but it is available in paperback and in digital Kindle format. I wanted the hardcover because I suspected I would keep this book in my collection. In all of the many hundreds of books in my collection, very few of them were purchased new and even fewer of them were priced at $20, but I do not regret this purchase at all.

I am trying to read this only one chapter at a time. It takes a while to wrap my mind around each chapter. Therefore I am not even 1/3 of the way through The Volunteer, but I highly recommend it.

That is what I am reading. Thank you for stopping by.

Email ThisBlogThis!Share to TwitterShare to FacebookShare to Pinterest
Labels: Preaching, Something to Think About, What I Am Reading