Another Green Machine Story Complete With A Happy Conclusion 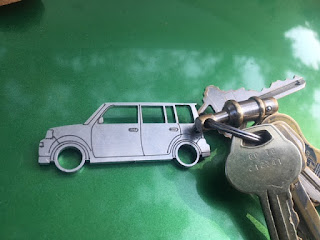 We have been having a great week of revival with our friends at Tanner Williams. We love brother and sister Williamson and we love the church folks. But even in revival, the earth keeps spinning and life slows down for no one. In the midst of revival, the Green Machine needed a little attention.

Sunday night after church we drove to McDonald's for fellowship and drove back to the BoggsMobile with no problems at all. Monday morning Kelly Jo and Odie loaded up to go to town and the Green Machine would not start. No crank, no click, no nothing.

We pushed the car up the hill and popped the clutch on the way back down and the little thing ran like a sewing machine. The battery was four years old in May or June so I assumed it was weak. I checked the voltage and it was low.

I took some time to clean all of the connections and it still would not start with the key. By then it was afternoon so I shelved the project until Tuesday morning.

By then the battery was too low to push start and I had to put the Apostle's charger on it for a while. It still would not crank with the key, but it did push start. Now it appeared the battery might be weak, but the starter might be bad too.

On the third stop in town, I finally got some answers. The counter guys at Pep Boys were very helpful. After testing, they thought the battery was good enough, but the starter was bad. I decided to have them change both and left it with them.

Bro. and Sis. Williamson were close to town so they swung by to pick us up. When the work was finished, we took the Apostle's car to Pep Boys and picked up the Green Machine. So far, the new starter and new battery seem to have solved the problem.

That is life with an older car with lots of miles, but it is so much better than having a much newer car and a new car payment to go with it. We have now been about 13 years without a car payment and we would like to keep it that way for a long time to come.

Did you notice the picture at the top of the post?

It is a miniature Xb for my key chain. My good friend, Bro. Galen Cummins found it somewhere and ordered it for me. Kelly Jo laid it on the hood of our full grown Xb for the picture. I love it.

Thank you for taking a moment to check on us today.

Email ThisBlogThis!Share to TwitterShare to FacebookShare to Pinterest
Labels: Praise The Lord, Stuff, The Green Machine