I Knew It Was Only A Matter of Time.

I knew it was only a matter of time, but I was hoping for a little more time.

Saturday will be eight weeks since I have done any "emergency" work on the BoggsMobile. We did a few things in Vonore, Tennessee the end of March, but most of that was elective stuff. None of it HAD to be done right NOW.

After spending over five weeks almost totally consumed with work on the bus, eight weeks of doing almost nothing but checking the oil, checking the tire pressure, filling up with diesel and driving was a welcome respite.

Yep, I knew it was only a matter of time.

Tuesday Kelly Jo needed a short hose. She looked in the first bay and I opened the second bay. This is the bay that has a little storage area for tools, the water heater, eight 4D batteries, two inverters and a bunch more electrical stuff.

I opened the bay and saw water everywhere. That is not good. We pulled all of the stuff out and soaked up some water and this is what it looked like. 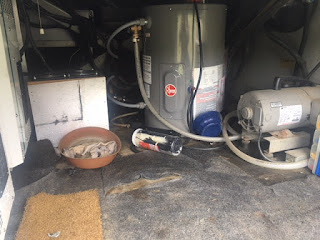 I still did not know where it was coming from. I had Kelly Jo go inside and turn on the water pump and I found the leak. Well, it actually found me right in the face in a roundabout way.

😰
It was a pinhole leak in the plastic water line going out of the water heater. It was shooting water up to the ceiling of the bay and down into my face. 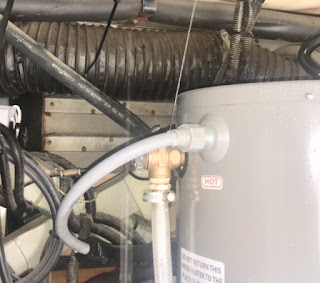 We had to have water and it was almost 3:00 PM. That turned a minor leak into a rush to get repaired and cleaned up before church. I loosened the fitting and cut the line behind the hole then I jumped in the car and went to Lowe's. The round trip took me about an hour and 20 minutes.

Plumbing problems always mean one thing for me, a call on the Batphone to Bro. Jimmie Radcliffe. I am very thankful that Bro. Jimmie still takes my calls! Thank you, friend.

That left me with the option of using PEX fittings. That is fine, I have a nice $63 PEX tool. The only problem is that my $63 PEX tool is in Ohio. 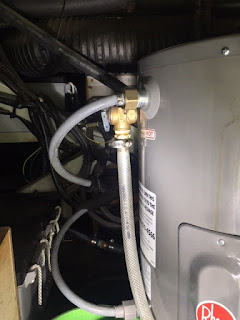 I knew the shorter hose would be a tight fit and I needed to rotate the water heater a couple inches. I could not rotate it without emptying the water and I did not have time for that before church. Because I could not turn the heater, the hose in the picture above is bent too much, but it works for now.

I went back to Lowe's Wednesday and purchased a few more fittings. I will add a little length to the hose at a later time and maybe put a 90 degree fitting in too.

The bay is now dry and the stuff is now loaded back in. Thankfully none of the electrical components seem to be damaged by the water. It could have resulted in major failures and an expensive fix

Some periods of time I have a project or two like this each week for many weeks in a row. Almost eight weeks of no problems after an intensive period of bus stress was a blessing. I was hoping it would last a little longer, but it was only a matter of time.

Lesson: Be thankful for what you get, Davy and then do what you have to do!

Thanks for stopping by today.