Getting things rolling Tuesday morning turned out to be a bigger ordeal than anticipated, but we finally made it. We left about 9:40 AM and spent a beautiful day driving west toward Oklahoma.

Tuesday Morning
When we arrived at the Ranch from Virginia over a week ago, I used Dad's truck to back the trailer into the barn. I needed to remove and sort the contents at some point and I told you about that HERE.

The tent trailer was going with us this trip so I needed to pull it out of the barn. I had assumed that I could back the bus up to it, hook up and be gone. Monday evening I began to doubt that simple plan.

The drive slopes up hill from the barn so that causes the hitch on the bus to be very close to the ground as the back end of the bus goes into the barn. Once I considered that, I thought it might not work. When I had Kelly Jo back the bus inside Tuesday morning, my doubts were confirmed.

The BoggsMobile was running, the clock was ticking, we were ready to go and it was time for Plan B.

I called Dad and he came with his truck. We moved the bus out of the way, pulled the trailer out of the barn with the truck, hooked the bus to the trailer on level ground and then loaded the Green Machine inside the trailer. Got all that? Good.

I thought the trailer might be loaded a little heavy to the front so Kelly Jo backed the Green Machine inside. That puts the weight of the motor toward the rear of the trailer. Evidently that was enough to take care of any imbalance. The trailer and its contents rode perfectly all the way to Bristow, Oklahoma.

This pictures is taken from the side door. The car is to the left and the front of the trailer is to the right. 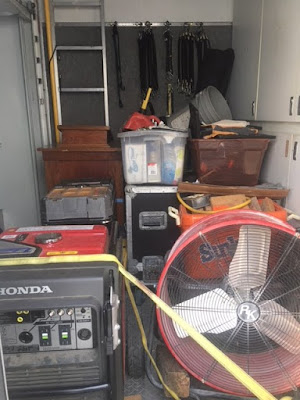 The tent trailer pulled very good both days. I am so happy we were able to put new tires and wheels on the tent trailer in April. It has made a huge difference in pulling the big lug around. I will probably never enjoy pulling this trailer with the bus, but the new shoes sure helps my nerves.

Our first big stop was about 280 miles from home in Effingham, Illinois for a little fuel. 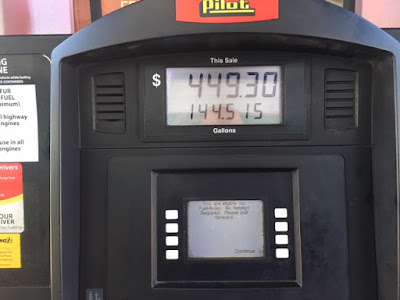 I briefly considered taking a nap in Effingham, but we were hopeful we could scoot around St. Louis before rush hour. We ran into a construction and detour zone while still in Illinois and lost about 30 minutes. That put us at St. Louis at the beginning of the busy time. Thankfully we made it fine. The traffic was moderately heavy, but moving at a good pace.

We stopped after 570 miles at a large rest area near Conway, Missouri. We were early enough to snag a good level spot and we had a good night's sleep.

I did notice this when we arrived. 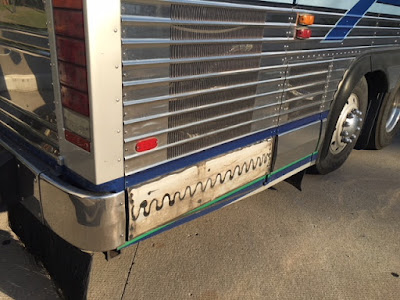 We lost the skin of a stainless rub rail along the way some where. I have never seen it like this before. I think I have had this whole rub rail off before and I did not realize it was in two pieces. OUCH!

I snapped this picture below before leaving  the rest area Wednesday morning. We only had about 250 miles to drive so I let the girls rest a smidgen. 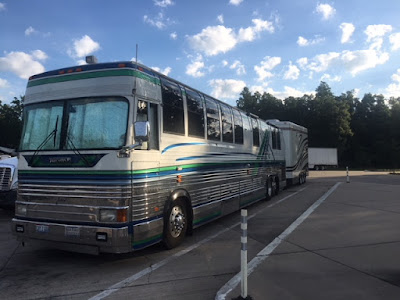 I stopped at Colaw RV Parts in Carthage, Missouri for a few things, but could not find exactly what I needed. That may be the first time I have ever been in there without leaving a good bit of money behind.

We were pulling into the Bristow Holiness Church by about 12:30 Wednesday afternoon. It only took a few minutes to unload the car and back the trailer and bus into the RV spot here. The first thing we did was take a nap. Then we ate, cleaned up and headed over to the Bristow Camp Meeting a couple of miles away. We should have a few pictures from that tomorrow.

Thank you for traveling with us. The bus rolls again this morning. Jump on board.

Davy
Posted by Davy, Kelly and Odie Boggs at 6:40 AM