Last week we parked at Roadrunner RV Park in Oklahoma City. We have stayed there many times through the years while preaching at various churches in the area and when passing through.

It was always a nice park, but they only had a few spots we could wiggle in. I think we parked in the exact same spot every time we parked there in the BoggsMobile.

Here is a picture of the BoggsMobile in our spot in 2014. 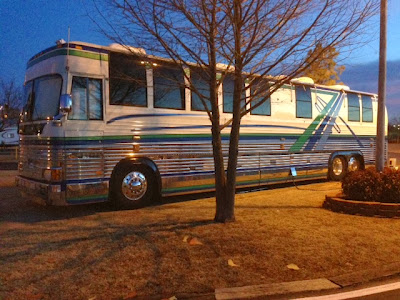 Roadrunner RV park took a direct hit from a tornado in 2015. This is our first visit since the park was destroyed by the tornado. It was horrific and a miracle that no one was killed. I wrote about the destruction from the tornado then and posted some other pictures that we found online. It was terrible for us to see the pictures of a place we had slept so many nights. Obviously it was even worse to be there. The RVs were tossed about like rag dolls.

Since the storm they have expanded by over 50 spaces. I did not realize until I talked to some of the folks in management, that the expansion was already underway before they were devastated by the tornado.

It was a tremendously trying time for the park. They were in the middle of investing a lot of money to expand and then their incoming revenue was completely stopped!

The remains of RVs were scattered everywhere and RV owners were waiting on word from insurance companies. It was weeks before the clean up could be finished. The park could not rent any of the spaces so all they had was money going out and nothing coming in.

Thankfully they survived the tornado and the financial storm that followed. The original section looks great and the new section looks even better. I would love for some of the turns to be bigger, but they were working within a limited area and it is very good. 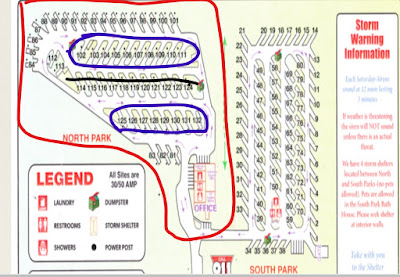 They also have a few underground storm shelters. They may have had them before, but it is evident they have them now. I think the storm that blew through Friday night had several of us thinking about trying out the shelters.

It was nice to be back at Roadrunner in OKC and very nice to see the expansion for ourselves. We have plans to be in Midwest City later in the year and we will probably stay at RoadRunner again then.

We are having a great time in Wichita this week. I am off to preach my first service at the country jail this morning. The services at the jail are a regular part of our annual trip here and I always look forward to it.

Thank you for dropping by today. Come back real soon.

Davy
Posted by Davy, Kelly and Odie Boggs at 6:11 AM