I have been having an intermittent problem on the BoggsMobile that has been increasing in frequency the last several weeks. It is one of those things that "could" leave me stuck some where so I wanted to get it addressed while we were close to a Prevost shop. We had been to the Prevost shop in Mira Loma before so I emailed them a couple of weeks ago.

I had talked to Jeff Rowe in Tennessee as well and we were pretty sure the problem was a protection valve on one of my air tanks. The bus would not air up to ride height in the morning. After cycling the brakes and causing the air compressor to kick on, we could hear a woooosh as if a valve opened and then the bus would go up. Since all the Norgren valves have been replaced the check valve seemed likely.

We left Bro. Deatherage's mid morning on Monday. They have plenty of room to park but getting in and out their back entrance can be a little tricky depending on where cars are parked on the street. Thankfully we were able to time it just right and there was no one single car on that section of street.

Prevost is only about 11 miles away so we were there, checked in and parked in the back in about 40 minutes. Our appointment was for the second shift and I pulled into the shop a few minutes after 3:00 Monday afternoon. 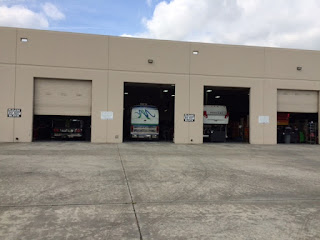 I did not get a pictures but the mechanic's name was Jeff. He is originally from Queens, New York and I enjoyed visiting with him. They lifted the BoggsMobile in the air about 4:00. 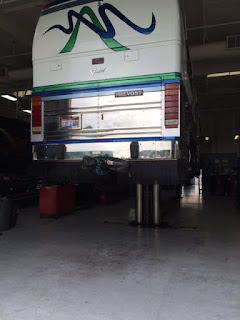 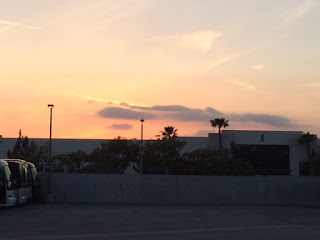 The folks at Prevost Mira Loma agreed Jeff Rowe's diagnosis and a few hours later the valves were changed. The bus came up normally Monday night after the repair, again Tuesday morning about 7:00 and also a few hours later when we left. 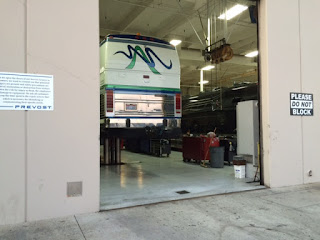 Sometimes only time will tell on things like this but it seems like it is OK now.

Here is the BoggsMobile and the Green Machine shortly before we left Tuesday. 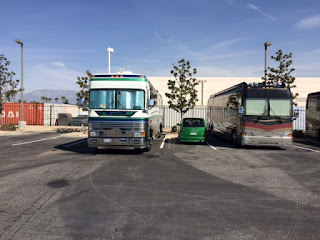 I hope that is all taken care of now. Thank you for checking into the blog and for praying for us.

Davy
Posted by Davy, Kelly and Odie Boggs at 1:06 PM