We were sitting outside Saturday evening after the tent was up and all of the day's work was completed and a little friend discovered us. He was super surprised when he noticed me. My guess is that he had never encountered anybody as big as me. 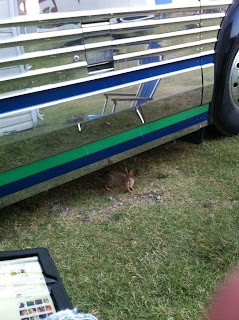 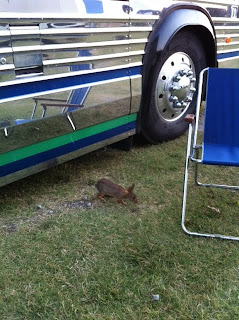 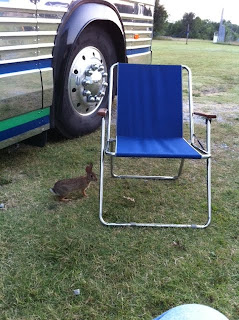 He looked around for a minute or so while I was snapping pictures and then turned around and went back under the bus. I suspect he had never seen anything as big as the BoggsMobile either.


Yesterday's project was tires. About two weeks ago in THIS POST I told you about a leaking tire. I had just replaced all six trailer tires in Indiana and one of then was leaking within 300 miles. I put the spare on in Missouri and while in Claremore I took the leaking one to the Firestone dealer. The new tire was OK but the aluminum rim was bad. Evidently they can develop porous spots and start leaking over time. This one did.

Fortunately the spare rim was also a matching aluminum rim. I thought that Colaw RV salvage in Carthage, Missouri would have a matching rim but they did not. They told me that used tires and wheels are in a big demand and they do not last long in there at all. They had a steel rim for $70. Thanks but no thanks.

I found a new steel rim in Claremore for $38. Bro. Millikin brought it to me Monday. I had the spare put on the steel rim and the new Firestone tire on the spare aluminum rim. Then I mounted it on the trailer, mounted the spare in its place, put all of the tools and jack away and called it quits.

Today's project is the batteries. I plan to start at 5:30. This is going to be a touch job for me but I know God is going to help. In fact, I know He is already helping. A man from North Carolina helped me tremendously with many of the technical aspects of the job and that really took a load off of my mind.

Now it is down to hard manual labor, squeezing into the tight places to do the disconnecting and then connecting the new ones. Just moving the batteries in and out at more than 125 lbs each will be a chore. I will let you know how it goes.

Tent Revival last night was tremendous. It was very hot but we had another great response in the altar service to Bro. Millikin's preaching.