It is time to explain. We stopped off in Vonore, Tennesse and arrived in Alabama a week late. I need to catch you up on the details.
1995 Prevost XL
The last Saturday in August we left Bristol, Virginia on our way to LA, lower Alabama. As you know, we did not make it to Alabama, but detoured to our Tennessee home in Vonore, East Tennessee Luxury Coach. We count Jeff Rowe and all of his guys in Vonore as very dear friends, but we did not stop there because we were missing them. We had been there prior to going to Bristol, Virginia.

We went to Vonore for the same reason we often go to Vonore, because the BoggsMobile is sick or we are trying to prevent the BoggsMobile from becoming sick. This time the sickness was apparent, but we were not sure of the cause.

The symptoms that flared up hit a little to close to home for comfort. We had no choice but to do our best to get to the source of the problem.

I used a phrase recently on the blog that I have uttered several times in discussing the BoggsMobile in conversation. When a bus glitch fixes itself, it is either a blessing, scary or both. This story is a great example of that.

When we first had this brake glitch in June, it fixed itself. We had driven over 3000 miles since then AND it had been thoroughly checked out in a shop. The problem would not duplicate in the shop and we were blessed to drive 3000+ trouble free miles.

But it is also scary. What caused the problem in the first place? AND what is stopping it from happening again? Unless you discover and correct the problem, it is always hanging over your head. You see, a blessing or scary or both?

Back to our exciting day
I got out of the bus as quickly as I could on the side of the road and went directly to the right front wheel. I did not even get to check the temperature because it was obvious there was a problem. There was fire behind the wheel where the brakes are located

Now, I do not want to oversell this story or add extra drama. But, when there is fire in your home where there is not supposed to be any fire, there is already drama enough and to spare. The bus was not burning down by any means, but every bus burning beside the road starts with a small flame.

I know that and I have seen way too many videos of buses burning. It is etched in my mind and that is a good thing.

I went to the door and asked KJo for a fire extinguisher, we keep several handy. I gave the flame one small squirt from the extinguisher and it went out. Within two seconds it flamed up again and another squirt put it out for good. Hallelujah!
Bus Fire
What in the world? Where did a fire come from? I checked the temperature of the wheel and it was less than 150 degrees in all the places I could aim the temperature gun. I had KJo back the bus up a few feet because that will often adjust the brakes to open IF they are dragging.

I had her pull forward several feet and we could hear nothing rubbing or grinding and the bus was not pulling toward the right. Also, there was plenty of gear oil in the hub.

We decided to limp forward about two miles to a rest area and figure it out from there. I drove on the shoulder and we stopped three times in two miles. Each time there was no fire and the temperatures were good. Yes, I did take the fire extinguisher outside with me each time.😀

We pulled into an open spot at the rest area and the wheel temperatures were still good, plus the rain had stopped. Double good on that one!

At Jeff Rowe's suggestion, (Yes, amazingly he still takes my calls) we unhooked the Green Machine, put Odie in there and then listened to the wheel of the bus for any unfamiliar sounds as KJo backed it up and pulled it forward. The wheel bearings and brakes sounded perfect. We left the rest area driving separately and checked the temperatures every few miles for the first 40 miles or so.

Along the way, I would get over in the left lane when nothing was behind us and KJo would pull up next to the bus to see if she could see or hear anything unusual. All was well the whole 140+ miles to Vonore. Nothing in the wheel got unreasonably hot and more importantly, no fire!

Monday morning we pulled into the shop and Jeff's guys pulled off the wheel. You could see where I had shot the fire extinguisher on the caliper that is only nine months old. 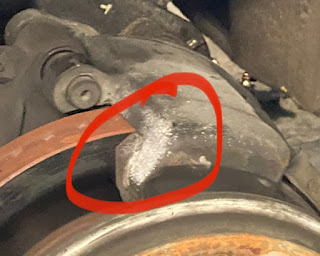 A little extra of the fire extinguisher mush was also on the hub. 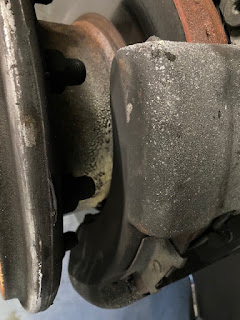 I think the consensus opinion is that there was some grease on the caliper and it ignited when the brake was dragging and the caliper got hot. But why was the brake dragging?

On close inspection, the caliper, slack adjuster and everything else seemed to be working fine, but we did get the problem to duplicate twice in only a few minutes. Everything pointed toward an air problem in Jeff's mind and he went to work on it.

There is a valve on the front of my bus that receives air and distributes air to each wheel when the brakes are applied. When I lift my foot off the brake, that same valve allows air to be discharged from the wheel and the brake releases.

Jeff began to suspect that the valve was not discharging properly so they replaced it. They also replaced the brake chambers on the front. Brake chambers are cheap those tow had not been changed in years. They also checked all the rest of the brakes and made sure everything was in adjustment. 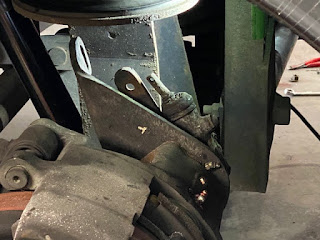 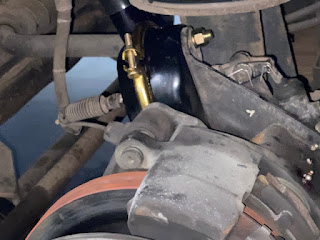 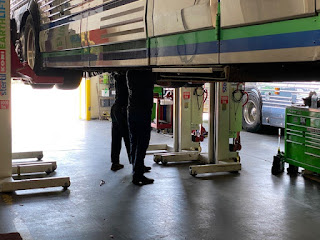 The front tires look great after about 21 months on the BoggsMobile. 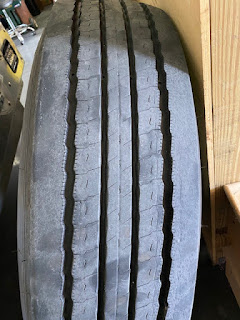 By Thursday a test drive was determined a success and we were ready to go. I am reasonably sure this problem is behind us now, but you can rest assured I will keep a close eye on the wheel temperatures for quite a while, especially since shooting temps on wheels is something I do on a regular basis anyway.

Kelly Jo and I have discussed this a lot over the last week. We are doing everything we can to be diligent with bus maintenance. We have driven thousands of extra miles to get things checked out or changed out of an abundance of caution. We have not been lax, we have not ignored issues and we have not skimped on maintenance.

Sometimes things happen. Machinery breaks no matter how new it is or how little it is used. We use this bus and it costs us time, money and effort to keep it going. We are doing our best and we are not going to beat ourselves up over it.

We will lift our hands and voices and give praise to God for helping us. The last Saturday in August could have been a tragic day for us and for the BoggsMobile. Thank God it was not.

We also thank God for our friend Jeff Rowe and his guys at East Tennessee Luxury Coach in Vonore, Tennessee. May God bless him with good health and strength and great business opportunities!

Davy
Posted by Davy, Kelly and Odie Boggs at 6:26 AM