Our Mile Markers not only serve to keep friends and family informed about what is going on, but they also serve as a log of sorts for ourselves. We often look back in the archives to find out when "this" broke, how "that" was fixed or where in the world we were located at a specific time.

This post will definitely serve that purpose for us.

Stopping An Underground River
You may remember that during the initial shutdown in March, KJo and I flew from overseas to Tennessee where our bus was parked. Two days later we drove to Ohio and two days after that we began revival online.

When we arrived home, one of the first things I had to do was get water flowing in the barn.

I always shut the water off in the barn during the coldest part of winter since we are not there anyway. I noticed a small leak in the barn before we vamoosed in January. In order to turn the water on, I needed to fix a leak first. 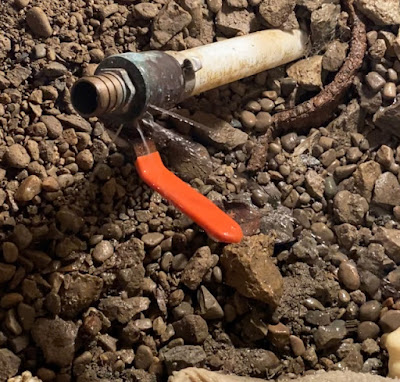 It was a quick easy fix and we were back in business. 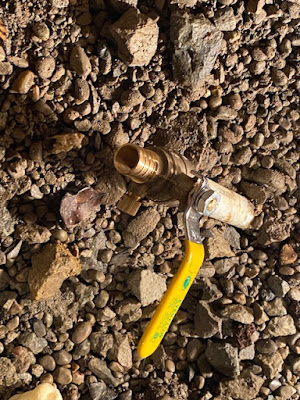 That was near the end of March. All was right in our water world until we received our monthly bill by email in early July. The bill said we had used triple our normal monthly usage from the third week in May to the third week in June and we were gone part of the time. That meant we had a pretty bad leak somewhere.

I called Dad and he went out on July 4 and shut the main water valve off at the road. At a later date he went out and turned on one valve at a time, we have three more, and determined the leak was near the very end of the line. It was somewhere after the valve at the barn.

There is an access pit by the barn where the valve is and it stays full of groundwater. We can turn the valve without draining the water, but I wanted to drain the water from it first thing and examine those fittings for leaks before I started digging.

I did not have a pump for the purpose, but I used a wet vac. It took a while, but it eventually got the job done. 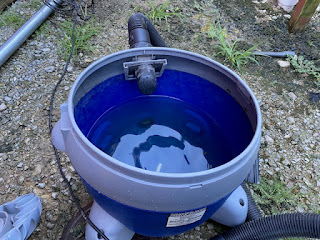 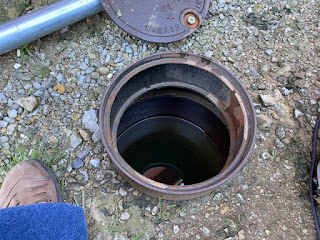 Once the pit was empty, I turned on the valve and there were no visible leaks in the pit. As many gallons as we were losing, we figured a leak would be easy to spot once it was discovered.

The next step was to dig the gravel out of the area in the barn where the water line comes up. The gravel around this line.

If that looked good then we would remove the gravel from around the hydrant outside and if that was dry then I would have to remove the dirt from the ditch where the water line was in the ground. I did not want to do that unless I absolutely had to do it.

Dad started removing gravel from around the line in the picture above. About 6-10 inches deep, he discovered the leak. Just below the valve I replaced in March was a fitting that reduced the line from 1" to 3/4". The fitting itself was leaking really bad right through the metal!

We removed that line, capped the 1" line and the leak was done! No removing the gravel from around the hydrant and no digging the ditch in search of a leak! Yay!!!

We lost several thousand gallons of water in less than two weeks of leaking, but praise God we did not lose it inside the house! The leak was actually in the best place and the easiest place to access for a fix.

Sometimes bad things are not near as bad as they could be or as bad as I imagine them to be. That is a good thing to remember.

Davy
Posted by Davy, Kelly and Odie Boggs at 6:17 AM

Email ThisBlogThis!Share to TwitterShare to FacebookShare to Pinterest
Labels: Stuff, The Ranch