Odie wrote about my Mother's parents a few years ago on Mile Markers, but a special date past on Friday and it caused me to begin to think about Grandpa and Grandma Isaacs again. They are never far from my mind because they had such a tremendous influence on my life and still do today.

My mom, Martha, sent me this picture Friday. I introduce to you Godfrey and Bessie Isaacs on their wedding day, May 10, 1919. 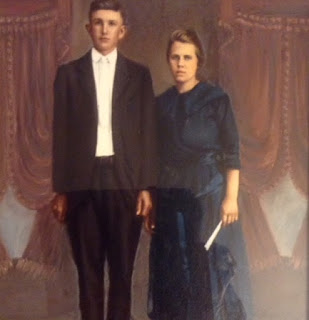 Grandma Bessie's sister and her husband took them to Richmond, Kentucky to get married. That is over 20 miles one way in a horse-drawn wagon. Grandma said they wore their winter coats and a big snow fell on their way.

They would have their first child the next year and that baby would pass away before his first birthday. My youngest brother, Tommy, is named after their first child. Their last child was born in 1947. He was their 17th. 14 of those children would live to be grown and have their own children.

Grandma and Grandpa lived in Ohio for a time, but most of their lives were spent way up a hollow about 2 miles off Red Lick Rd at the Madison County/Jackson County line.

They built this home in about 1937. This is where my Mother was born. 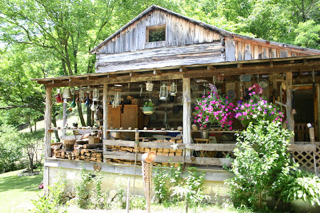 That is also the home that we visited all our growing up years. We spent lots of weekends and a week or two most every summer roaming around the mountains surrounding the log cabin, playing in the creeks, climbing in the barn, going with Grandpa to tend to crops and animals and watching him slop the hogs. We also carried wood and water for Grandma.

The meals in Grandma's kitchen were the best meals I have ever eaten to this day, especially the breakfasts. Every single night I ever spent in that house was punctuated with the smell of homemade biscuits, gravy, sausage, bacon, salt-cured ham, fried potatoes, fried apples, eggs and who knows what else every morning.

Meals were a huge affair at Grandma's and were not to be rushed into lightly. Once the meal was prepared, we did not go to the tables in the kitchen. No, we went into the living room, got down on our knees and prayed. Prayer was serious business in that home.

Then we gathered around the tables and said "Grace" over the meal. Just about everything they ever ate came from the labor of their hands and the grace of God and I suppose they wanted him to know they were thankful.

And then we did eat! Wow! What amazing memories I have of the food. The absolute best biscuits in the world were made in that kitchen on Grandma's wood stove. Cracker Barrel biscuits have a hint of the flavor of Grandma's and even they cannot hold a candle to the biscuits in my memory.

Grandma's jellies and jams were a perfect treat for me growing up, especially her blackberry jam. We would do as Grandpa did for dessert. He would put some home churned butter on his plate, a big spoon full of blackberry jam, mix it all together with a fork and sop it up with his biscuit. The only thing that would give that any competition was to substitute Grandpa's famous homemade sorghum molasses for the jam. Wow and Wow!

Another great memory of Grandma and Grandpa's house was all the kids around. I told you that 14 of their children grew to adulthood and have their own children and Boy Howdy did they ever have children. There were 98 of us grandkids with the last one being born a few months before Odie in 1985.

Uncle Herman's kids and Uncle Charles' kids were almost always around since they lived close most of the time. Sometimes you could throw in Aunt Madeline's kids and Aunt Edna's kids too.  At home, we had trouble finding enough kids for a game of baseball, but at Grandma's, we had enough kids for a whole league.

But finding enough level ground to play baseball would have been difficult, so we ran all over those hills having the time of our lives. By the end of the day, we had enough dirt ground into our clothes and skin to make a mountain of our own.

Bath time always made me regret the dirt I had accumulated. We carried cold water from the well or rain barrel and put it in the tub one bucket at a time and then added a pot of water that Grandma had heated on the wood stove, hoping to knock some of the chill off. It never seemed to work.

Every night, everyone that was staying in the house and even others that lived nearby would gather in the living room. Grandpa would read a chapter or two from the Bible with a flickering coal oil lamp to read by. He would expound a little from the scriptures he had read and sometimes there would be some discussion. Then they would sing a song or two and they would pray.

I did not realize as a boy that all of that was sinking into my heart and mind, but it was. I remember many of the things Grandpa talked about and Oh how I remember the prayers of those gathered in that living room.

Like all of us, some of Grandpa's beliefs were shaped more from life experience than by the Bible, but he was very sincere in studying the Word. That soaked in.

Grandpa passed away in August 1985 when I was 18 years old. I was in his bedroom laying across the end of the bed when he stirred. He had been mostly comatose for a day or two when he opened his eyes, reached up for something coming down from the ceiling that we could not see, embraced the unseen and slipped into glory.

This is Grandpa and Grandma Isaacs in the early to mid-1980s. They had been married over 66 years when Grandpa died. 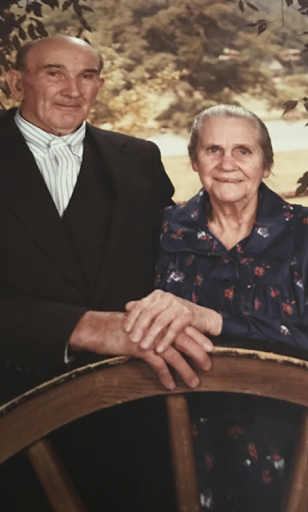 Odie was born in October 1985 and this is Grandma holding Odie as a small baby in my parents home. 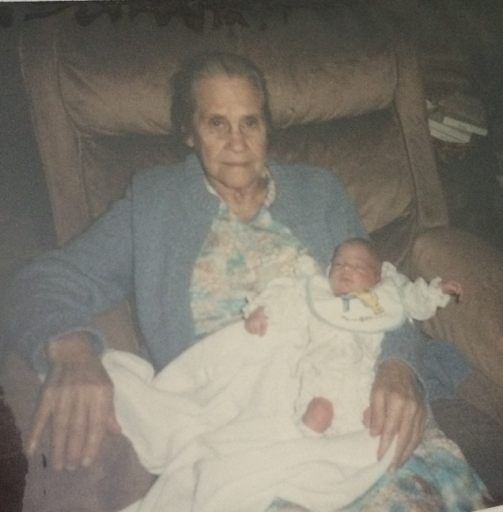 She passed away in October 1987 after a short illness one day before her 84th birthday. 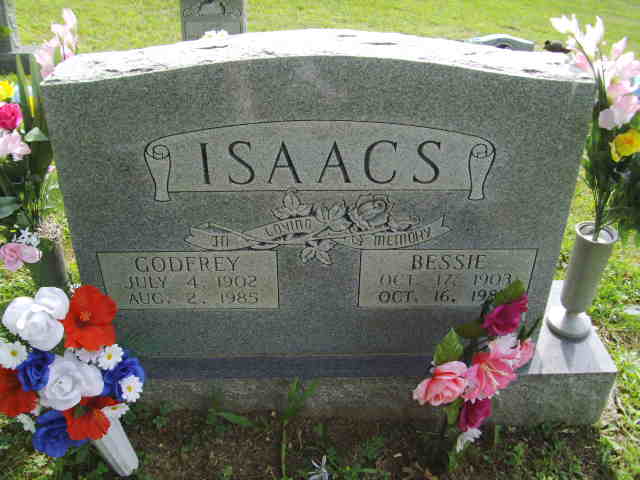 The spiritual legacy that Grandma Isaacs left us is huge. She was saved, sanctified and filled with the Holy Ghost as a very young girl during the early days of the second outpouring in the early 1900s. Her experience with the Lord influenced and shaped every single aspect of her life.

She was above all else, Christian. She lived the hardscrabble life of a farmers wife in a house with no access to running water or electricity. She birthed 17 children into that existence and took care of her children and her husband and everyone else that came through. She did all of it with a smile on her face and a song in her heart.

The three weeks that she lay dying in my Aunt's house, just a few miles from where she lived, her family gathered around her. I heard several of her children say that they had never heard their mother raise her voice in anger.

Wow! Odie could say the same thing about me, but she would be lying.

Grandma Bessie Isaacs was a sanctified woman and her example and influence still stir my soul today.

100 years ago, Godfrey and Bessie Isaacs were married. Although they only have five daughters and one son still living, the direct descendant's number in the multiplied hundreds now. Many of the descendants are dedicated Christians. Some are Pastoring churches, singing and preaching the Gospel all over the world.

Who could have ever guessed those results when a 16 year old boy and a 15 year old girl hitched a ride in a wagon to get married on a cold snowy day in May?

May God bless the family of Godfrey and Bessie Isaacs this week 100 years after they joined forces and began their family journey.

Davy
Posted by Davy, Kelly and Odie Boggs at 1:13 AM