These have been some long "tiring" travel days but we finally made it to the tent site in Richton, Mississippi. This morning we will begin preparations for the tent set up and the tent will go up this evening by God's grace.

We were already wore out Sunday night by the time the tent was down and packed away so we had planned on resting some while making the trip to Richton. The extra tent piece and two hundred extra chairs squeezed the Green Machine out of the trailer so Kelly Jo had to drive this trip. We really intended to build in some rest with shorter driving days. The "short driving day" part of the trip did not work out so well but did rest some.

We stopped as planned at the truck stop on the Kansas Turnpike and laid down about 3:00 AM. I was up shortly after the chickens because while driving the short distance Sunday night I realized the trailer was loaded heavy to the back of the trailer. The tent bags are on a platform and it was toward the back of the trailer where I thought it should be. I removed the bags, moved the platform forward and loaded them back on.

The trailer rode perfectly after that. Problem number one solved.

All went well for a few hours until Kelly Jo noticed one of the safety chains was dragging between the bus and the trailer. The bolt that hooks the chain to the trailer had broken. I replaced those bolts in 2012 so it held for over 3 years and a bunch of miles.

I went to Atwood's (One of my favorite stores) in Gainesville, Texas and bought a set of bolts, washers and nuts and replaced the bolts on both chains in the parking lot. Problem number two solved. 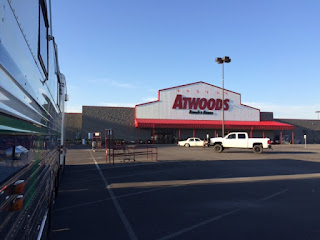 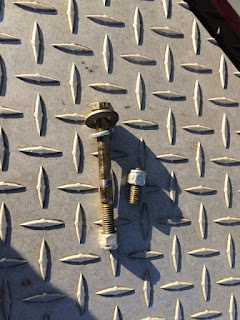 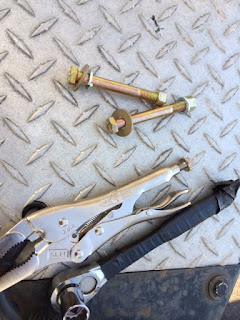 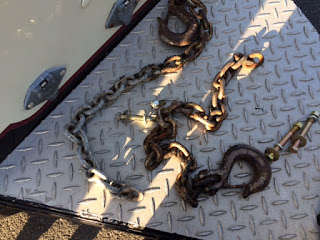 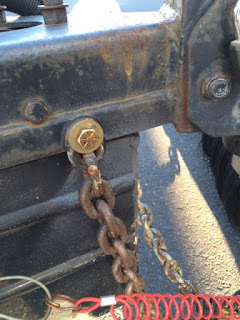 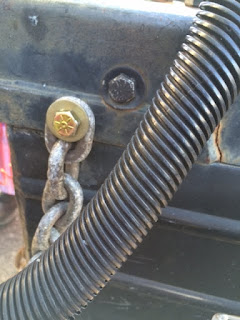 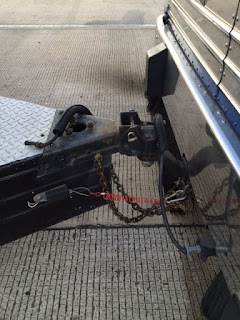 While in Gainesville we parked at the near empty lot of the outlet mall and met our dear friends at Cracker Barrel. 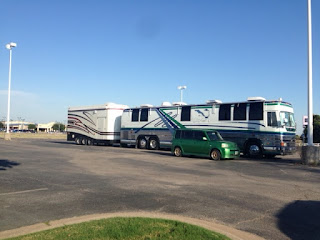 It was wonderful to spend some time with Sis. Logan, Pastor Dennis King and Sis. Judy. These are super folks and we have known them for many years.

Kelly Jo and Odie are showing the new clothes Sis. Judy bought them at the Cracker Barrel Mall! 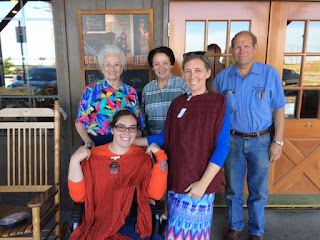 The time spent visiting at Cracker Barrel and working on the trailer at Atwood's allowed the traffic in the Dallas area to thin out. We breezed right through construction zones in Denton and Lewisville and only slowed a little going around I-635 on the north side of Dallas.

We ended up driving 410 miles and stopped pretty late Monday night. We tried finding a place to park in some of the truck stops but everything was full. We spent the night in a rest area off I-20 near Van, Texas. Here is a picture the next morning before we left. We did get a pretty good night of rest Monday night. 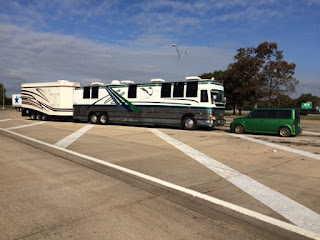 Tuesday morning started off pretty good until we noticed the driver's side front tire on the trailer was losing air. I stopped and filled it to 80 lbs and then checked it 45 minutes later. It was back down to 60 so I topped it off again. I did that a few times until I found a tire store that could get me in along the interstate in Minden, Louisiana.

The tire was fine but the valve stem was leaking. They put in a few valve stem and away we went. 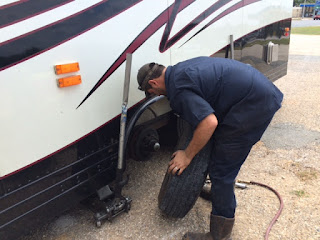 I checked the pressure 45 minutes later and it was down to 60 again. Oh brother! I filled it a few more times until I found another store big enough to get the bus and trailer in.

This was parked near the shop. Just in case you can not see the picture, the latch must be broken so the door is held closed by sticking the seat belt outside the door and holding it with a screw driver. I should have pulled out of that shop immediately. 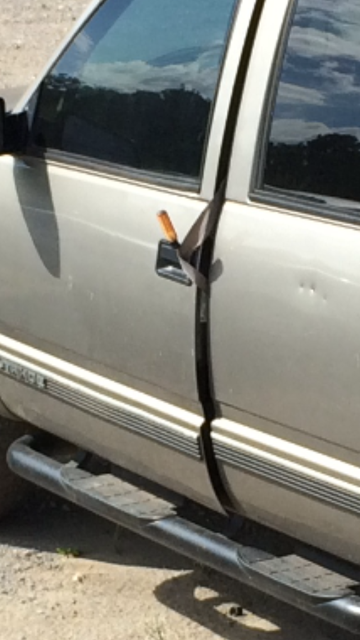 By the time I arrived at this shop I was pretty sure I knew what the problem was. Back in 2012 I had two of the aluminum rims start leaking and I decided then to buy a tire pressure monitoring system and replace the rims when I could. The whole story is HERE. I had intended to replace one rim every month or two but they held up so good I never did. Why spend money to replace good rims, right?

I figured the time to do something was now and it was. The rim was split now big enough to see with the naked eye and the more pressure added the bigger it became. Time to buy another steel rim but they had no rim that would fit it and everything was about to close. I still had one of the other bad rims that was leaking slow but I did not want to trust it if there was another way..

I let the men at the shop talk me into putting a tube in the tire. That was a very bad decision that lasted only 29 miles! The tube went flat in a one lane construction zone. I pulled over on the shoulder but could not get off the road enough to change the tire or even remove it. I figured the tire was ruined anyway so I pulled into the one lane at 15 mph and made a bunch of people mad for nearly a mile.

There was an exit less than a mile away and I changed the tire on the on ramp. It was a perfect place with plenty of room and only one truck came by the whole time. Well, it was perfect except for the little red Mississippi biting ants. Double Ouch!

My spare was an old tire of unknown history I bought in Nebraska in 2012. It was mounted on the old slowly leaking rim that I mentioned above. I knew that rim would only leak about 10 lbs in over two hours so I had figured the old tire and rim would get me to the next town whenever I needed it. I was right and it got me all the way to Jackson, Mississippi.

Our plan all along had been to make it to Jackson, Mississippi and stay until early Thursday morning. We have never found a suitable RV park in Jackson but we were planning to park in the RV parking at Flying J. We wanted to visit the hospital to visit our friends that Odie mentioned on Saturday.

By the time we made it to Jackson, our bodies were tired, our nerves were shot and our plans had definitely changed. We had only driven 342 miles but it had taken us 9 1/2 hours to do it for a whopping average of 36 mph.

To make matters worse, RV spots at Flying J were filled with cars. The truck parking was full at Flying J, Loves and Pilot. There was plenty of room at Bass Pro and Kelly Jo called to make sure they would allow us to park. We pulled in there and went to bed quickly!

I was up early checking tire stores. I was trying to find a steel rim that would fit but since most places do not sell 8 lug rims they could not even tell me the name of the bolt pattern. After 6-7 stores I found one that could get a steel rim. He called the bolt pattern an 8 on 6 1/2 with a positive offset.

While he got the rim I went back and got the bus and trailer and drove them to the tire shop. I had them put my spare on the new steel rim and install in on the trailer. 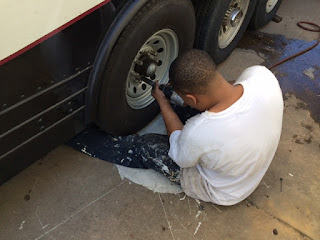 I bought a used tire of the right size and had them mount it on the rim that leaks slowly. I figured I could use that as a spare if I had any problems during the 110 mile drive to Richton.

I have now had three of the original aluminum rims fail on the trailer. Now is the time to replace them all and I am looking at options. I may go ahead and replace the three year old tires to and will probably upgrade to load range G tires. I used to change tires on my fifth wheel every 18 months but I put a lot of miles on it then too.

I drove nice and slow all the way to Hattiesburg where we stopped at Harbor Freight, Lowe's and then Odie bought my lunch at Golden Corral. Ymmy! Thanks, Odie! 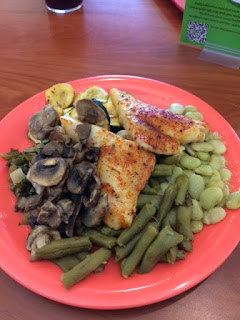 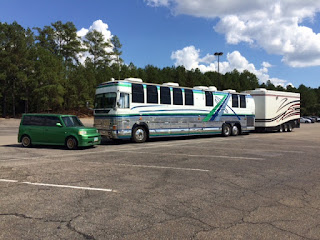 Kelly Jo and Odie ran into Sam's while I headed to Richton after one more stop in Petal, Mississippi. I finally pulled into the Recreation Park at Richton a few minutes before 5:00 to find Pastor Scott Morris waiting to help me get in. It was good to finally be here and see my firend!

It has been three "tiring" days of travel but I still have several things to be thankful for.

1. Travel trouble takes nothing away from the blessings we enjoyed last week in Wichita. Praise God for the lives that God changed in City Reach Wichita and they way He blessed so many.

2. The BoggsMobile and Green Machine ran great with no problems.

3. We made it safely almost 900 miles with no accidents or real major incidents.

4. God has blessed me with a wife that is a trooper and still loves me and follows me any where.

5. I get to put the Blue and White Gospel Tent in the air tonight and watch God work in lives in Richton, Mississippi.

6. Regular readers know that the other thing is that I am thankful for. Lol

God bless you for reading.

Davy
Posted by Davy, Kelly and Odie Boggs at 6:29 AM