With all the excitement of the tent going up, the tent going down, the people getting saved, the folks getting healed and all of us enjoying the blessings of God during City Reach, it might be easy to forget that life rocks on. However, even in the middle of revival, life must be tended too.

I took care of one of those things this morning and it prompted me to tell you about another one from a few weeks ago.

On September 1st I posted about our previous weekend and mentioned a problem we were having with the bus on the way to Pastor Nathan Conner and the Hilldale church in Tulsa.

No rest for the wicked and the righteous don't need any, I guess because I never did get to lay down. We had developed a little bus problem and it demanded my undivided attention until it was solved. I will tell you about it later when I am pretty sure my fix actually fixed it.

Our twenty year old Sub-Zero residential fridge in the BoggsMobile was in dire straights and in need of immediate repair. It seems that my "fix" that day has held so it is time to tell you about it.

While we were traveling from Texarkana to Tulsa on August 31 the girls smelled something burning and it seemed like it was coming from the refrigerator. The same thing had happened once before a few weeks earlier and we turned off the breaker to the refrigerator. We could not get it to duplicate later.

Kelly Jo turned off the breaker this time and when arrived in Tulsa I got down on the floor next to all of this while she turned on the breaker. Yep! There is that overwhelming burning smell. 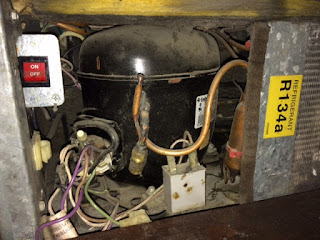 The smell was coming from this bundle of wires which includes the run capacitor and an overload relay. The pictures above and below show it after I removed the plastic cover. 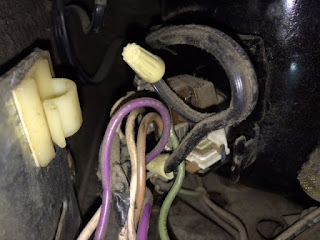 The burning smell was so strong right there because it was actually burning right there! I could plainly see it when Kelly Jo would turn on the breaker. Here is the proof! 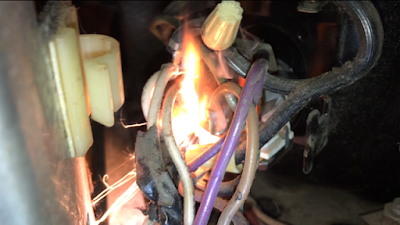 If that had caught fire with us in church or away from the bus we could have lost everything. If it had caught fire while the bus was in the barn and we were out of state, it would have been even worse. If it had caught the floor on fire while going down the road before we noticed, it would have been life threatening. It was very stressful while going down the road but thank God it burned when it did and that Kelly Jo and Odie knew what to do. That is one of the reasons we have several fire extinguishers on board the BoggsMobile! 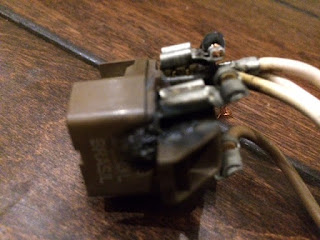 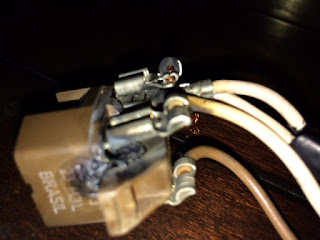 From the splices in the wires, I could see that the capacitor and the relay had been replaced before I owned the bus and it definitely needed to be replaced again. I called my resident appliance man, Pastor Dennis King in Gainesville, Texas and he walked me through my options.

After making several phone calls to suppliers I had a decision to make. I could spend $100+ and wait at least a week on the parts from Sub-Zero or I could by a 3 in 1 generic part from a local supply for about $20 and Bro. King could coach me on how to install it in place of the three existing components.

So Pastor Conner and I ran over to a supply house and purchased the part. I called Bro. King and with the wiring diagram in front of me (I have been thankful a hundred times the previous owners of the bus kept all the paperwork.) He walked me through the install and it worked!

The refrigerator fired right up and has been cooling like a champion ever since. I do realized the days are probably numbered on a twenty year old fridge that has bounced down the road nearly 300,000 miles but we are going to enjoy it while we can!

Here is a picture before I cleaned and buttoned everything back up. 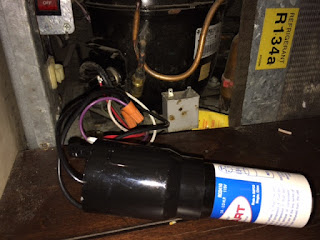 Thank God for Pastor Dennis King still taking my calls! That's one of the reason's we wanted to stop in Gainesville last week and buy their lunch! Today's repair was a lot simpler but no less nerve wracking getting to this point. I told you last week about our Tiring Travel Day on the way to Mississippi. It is a long saga that goes back three years but the latest chapter is now closed.

I am only going to put about 200 miles on the trailer the rest of this year. Next year I will have to pull it about 2500-3000 miles but the tent and chairs will be hauled in Bro. Jimmie Radcliffe's trailer most of the City Reach campaign in 2016. (That is another exciting story I need to tell you about in the future.)

I need to put six new aluminum rims rated to carry the weight and tire pressure that this trailer requires. The four remaining 18 year old rims would be fine on a truck or a trailer that does not get heavily used. I will not trust them much longer on this trailer, not with the weight I carry and the miles I pull it.

However, I hated to spend $2-3000 dollars on six brand new rims and six brand new load range G tires only to have them sit nearly completely idle the next 18 months. So I decided to buy one more heavy duty metal rim and one more new Firestone Transforce tire and get this thing through the next 3000 miles. That will give me some time to prepare and at the end of 2016 or early 2017 I can put new shoes on then.

Once I made that decision the rest fell into place. I found the rim at a trailer supply about an hour away and the tire at an auto shop nearby. The shop picked up the rim, mounted the tire and the manager brought it to the tent service last night. This morning I put it on. 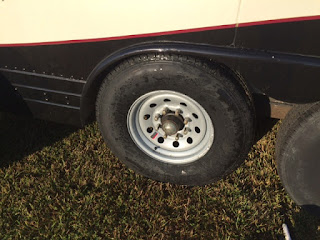 Now I have four original aluminum rims and two steel rims on the trailer. There are six Firestone Transforce tires on the trailer with five of them being 3 years old and one brand new. I have a decent spare that has kept me going about 200 miles mounted on the new steel rim I bought in Jackson. I have one of the original aluminum rims that is a slow leaker. I put another used tire on that one in Jackson last week That will be the backup to my spare.

The new tire and the new steel rim were both purchased by two different parties. I did not asked them if I could name them here so I will save that for later. I can name them to God and ask God to bless them. I have done that and will continue to do so!

That brings you up to date. Thank you for praying for us!