Travel Days and the BoggsMobile

We have had two good services of revival and we are looking forward to more revival over the weekend. I believe God is helping us. We were absolutely blown away by a visiting family last night at revival. We were as surprised as we could be when they walked in. Here is a picture of one of the children with Odie. 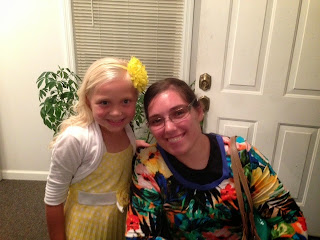 Do you know who it is? Leave your answer in the comments. No fair guessing if you attend their home church. I will have more pictures of them when I put up a Revival In Pictures post.

We had a nice smooth trip from Paducah to Prevost Nashville. I always dread leaving at night but I always enjoy driving at night. There is so much less traffic to contend with and the temperatures are usually cooler as well.

All was quiet when we pulled in about midnight. Prevost has a long row of metered parking spaces that people lease on a monthly or yearly basis. They park their buses there when the bus is in town and that takes care of two things at once. The have a  place to park their bus and the bus is handy for Prevost service too. Those spaces are off limits unless you lease them.

Then they have 6-8 spots with electric that are for buses coming in for service or parts. That is where we usually park. When we arrived Sunday night all of those spaces were full. That happens some times so we pulled over to the big parking lot area. There is usually plenty of room there but we have to run the generator if we need power. We have parked there plenty of times when passing through.

It was a nice cool night and I had been running the bus AC so the temperature was comfortable overnight with just fans. While parked I can run one AC for several hours without the generator but I do not sleep good when I do that. I keep getting up every hour to check on the battery voltage and that ruins my night. It is easier to run the generator and buy the diesel if it is too hot to sleep without AC. Thankfully, Sunday night the weather was nice.

We left Paducah Sunday night after church because I had made an appointment to have my wheels polished at Prevost in Nashville. Peter from Almost Chrome is a contractor that works all over the Nashville area washing, waxing and polishing buses. He is around Prevost in Nashville several times a week if not every day and he could fit me in Monday morning.

The wheels really needed some professional help. IF you remember I put new tires on the front back in April. I moved the front tires and rims to the tag axle and had the new tires mounted on the tag rims and moved to the front.

The wheel covers on the tag wheels and the front wheels were different. I had two options. I could spend SEVERAL hundred dollars per wheel and buy a set of the original covers OR I could spend $100 and buy a set that matched the ones I had already replaced. Then I could sell the originals for a profit or gift them to somebody that needs them.

No brainer at all. The original covers had been on the tag wheels for nearly 20 years and when I took them off and put the new ones on you could see all the gunk the old covers had been covering. Plus the covers themselves had marked the wheels and those marks were not covered by the new covers. Thus the need for polishing.

Peter was running behind so I pulled into the washer by where he does the polishing about 90 minutes late. It only took him about 45 minutes once he got started and they look great. The time was not really a factor because we were not doing anything besides waiting for Bro. Scott, Sis. Kim and Sis. Regan to arrive Monday evening. 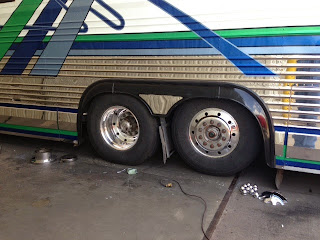 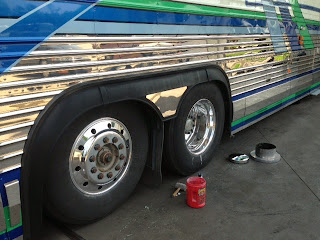 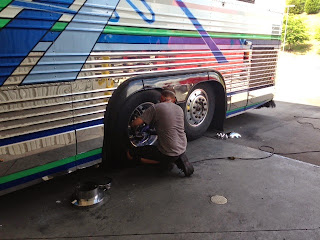 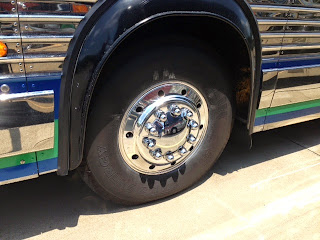 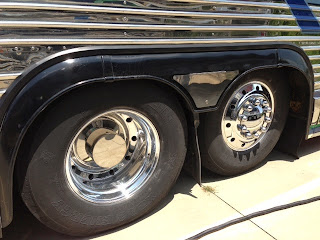 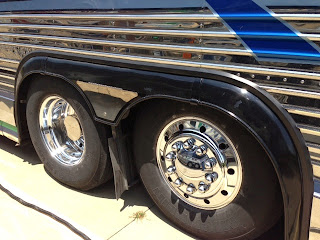 Once the wheels were finished almost all of the parking spots with electric were available. A few of those buses were in the building for work and would be needing their spot for Monday night so I was careful to pull in to a space where I had seen folks hooking up and pulling out for good.

I spent the afternoon studying and resting and the girls were engaged in a little retail therapy.

Here's my little girl in front of the bus waiting on her ride from Mississippi. 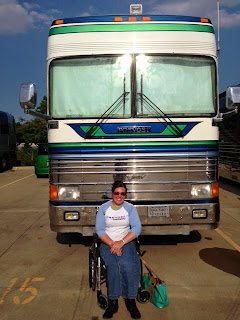 Wednesday morning I cranked the bus early in hopes of avoiding some of the morning traffic going around Nashville. We did not leave right then because it sounded like somebody was under the bus by the passenger side tag tire hitting something with a hammer.

It sounded like the hammering was coming from the air chamber I had replaced back in June. 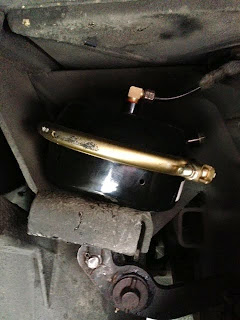 When the bus aired up and I could put my hand on it, I could feel the little man inside hitting it with the hammer and he was hitting it hard. I could not figure out how an air chamber could make that sound. As it turns out, it can't. I pulled up close to the building and went inside to ask about getting somebody to look at it. They were just starting the day shift so it took a while for somebody to shake free but when he did he knew exactly what the problem was.

Look at the picture above. At the bottom of the picture you can see a shaft with a pin through the end of it. That is a pivot point and it has an oft neglected grease fitting on it. You might see it better in the pictures below. 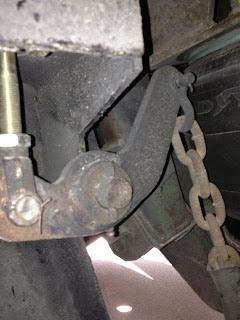 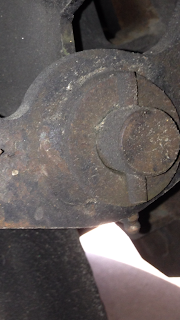 Because that grease fitting is often neglected the bushing messes up after many years and starts making a terrible noise. That knock was transferring up the shaft to the air chamber. Once it is messed up it is too late for grease and the only remedy is replacement. Mike from Prevost soaked it in high powered penetrating oil and that "knocked" the knock considerably. I soaked it with PB Blaster when I arrived here Wednesday and will do it again before I leave.

When I changed the chamber in June I noticed that fitting was being missed by the folks that change the oil and purposed to remind them my next oil change but it is too late for that fitting.

That's just one more episode in "When the Bus Turns."

When we finally left we had missed rush hour in Nashville and we had a nice smooth run to Caney Creek RV Park near Harriman, Tennessee. There is quite a bit of climbing going across I-40 and the BoggsMobile was ready to run. Some days it is like that. It eats up hills like they are nothing.

Have a great day.

Posted by Davy, Kelly and Odie Boggs at 5:38 AM