Ouch! That Had To Hurt!

I saw this a few weeks ago and forgot to post it. If I remember correctly this was the result of a recent storm in Michigan. Ouch! 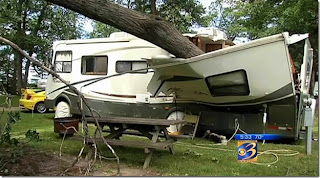 I know this ruined somebody's day and probably their whole vacation but thankfully nobody was hurt. After I found out the people were not injured I did notice that at least his tires are protected from ultraviolet sun rays with his nice white covers. The tire covers are doing their job and looks like he had two air conditioners so maybe he should have parked in the sun. That spot had a little too much shade!

We pulled into Prevost in Nashville Sunday night and parked next to this bus. 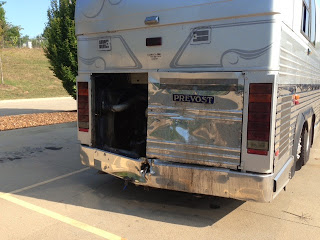 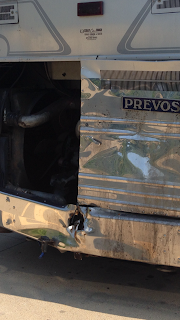 It was late when we pulled in but I could see in the dark that it was not going to be pretty. When the sun came up Monday morning I went out to take a look and it was worse in the light. Ouch again!

It looks like something hit him from behind and hard. The steal bumper has a whole pierced right through it. That is unbelievable. The bumper was nearly pulled off the bus when they separated the two vehicles.

You can not see it in the pictures but several things were broke in the engine compartment. The fan motor for the radiator is mounted on a solid base and it was all destroyed. I think the engine might have been knocked loose too. The fiberglass cap on the back of the bus was busted pretty good as well. This bus is an XL so it is at least 13 years old. It may be totaled.

I hate to see stuff like this especially when I know it could happen so quickly. We are very, very careful on the road and we know the Lord helps us in answer to your prayers but they call them accidents for a reason. Thank God for every mile we drive without incident and every storm that passes without blowing a tree down on us. Things could be so different in less time that it takes to snap your fingers.

We are still in Nashville and planning to leave this morning. We are scheduled to start revival for Pastor Herman Woods at Beechfork Holiness Church near Wartburg and we are excited to be there. You may recall that Bro. Woods had a fall and then a stroke a few months ago and we cancelled Homecoming revival there in June. God has helped him so much since then and we are thrill to get to see him, Sis. Margaret and the church.

We plan to stay at an RV Park in Harriman, Tennessee as usual when we are there and we have reservations starting today. It is only about 160 miles from here so hopefully we will be settled in early. I will try to put up a post tomorrow to cover our days in Nashville.

Davy
Posted by Davy, Kelly and Odie Boggs at 5:21 AM