Seriously, You Need To See This!

I have to remind myself that our Mile Marker readers are not always our YouTube watchers. I posted this early yesterday morning on YouTube right after I put up Monday's Mile Marker. If you have not seen it, it is worth watching. Believe me, it added some excitement to our day.

I tried to be diligent to avoid any video of the patient being transferred from the ambulance to the CareFlight. May God help them, whatever their need. Our night was a bit stressful, but not near as stressful as the person that was transported in the emergency and their family.

We woke up to a hurricane in Ohio!

As most of you here know, this tent is set up for a Tent/Cruise-In Revival. It is 20x20. We have service under the tent and the congregation sits in or near their cars in the parking lot or watches online so as to be socially distanced during the pandemic.

We woke up suddenly just before 4:00 AM to a loud noise we could not account for. KJo looked out the window and thought a plane was landing at first and then she quickly identified it as a helicopter. It was landing between the church and the tent and the tent was about to fly away on its own. We were outside as quick as we could be and the video begins about 3-4 minutes after we reached the tent.

There is a parking lot between our tent and the Dodds Pentecostal Church. It is obviously big enough to land a helicopter, but I would not have imagined it. We do not know where the ambulance picked up the patient before meeting the CareFlight at the church. We have heard it was nearby

There is a grass airport 1 1/4 miles from us as a crow OR helicopter flies.

Premier Health CareFlight uses Dauphin AS365 N3+ helicopters and I assume that is what this helicopter was.

We found this information on firehouse.com:
"A medium size, two patient helicopter will produce a wind on landing and takeoff that has a velocity of 60-80 MPH. Something to consider. A tropical storm is upgraded to a hurricane when its winds exceed 73 MPH"

For the record, this tent is brand new and was manufactured by the Miami Missionary Tent Company in Miami, Oklahoma. It is not ripped that we could discover at night. In the light of day, we can see a metal grommet pulled loose from a sidewall, several pinholes, abrasions, small signs of extreme wear and the tent is incredibly stretched.

The sidewalls were tied together and staked to the ground with 18" stakes, You can see those small stakes and ropes were no match for the wind generated by the CareFlight. There were two poles going down when I got up there. The big tent stakes and straps held firm and the tent would have taken the wind much better had the sidewalls not been attached.

We did have some equipment stands and brackets broken. Like I said, the tent is brand new and every storm shortens the life of the tent. It is obviously stretched now, but hopefully, the lasting effect will be limited. I have sent some emails to the manufacturer for their opinion on the damage.

The Wayne Township volunteers helped hold one pole during takeoff, but they left immediately after. The only interaction I had with them was when a volunteer asked us to step back and assured us, "The tent's not gonna go anywhere."☺️ I did ask him to stay and help us, but I do not think he heard me. I wish I would have videoed his best attempt at an earnest face when he told me "The tent's not gonna go anywhere", but I was trying to respect his privacy.

Pastor Kelly Rogers worked as a fireman for 15 years and is very experienced in landing zones. He is as dumbfounded as I am as to why the fire department thought landing next to a tent was OK. He and I wholeheartedly agree that first responders have a tough job with a lot of stress. We appreciate that they are willing to run toward danger while others are running away. But we are still scratching our head over this decision.

If the tent had not been set tight, if KJo and I had not arrived when we did and set poles back in place, this minor heart palpitation for us, could have been a tragedy. The tent could have come loose and could have sailed into the blades of the helicopter. The pilot, nurses, patient, first responders and even neighbors could have perished.

KJo, Odie and I happen to be the closest neighbors, but there are houses all around. Praise God for His hand of protection!

Here are a few pictures. 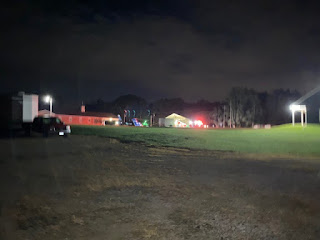 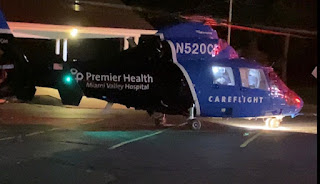 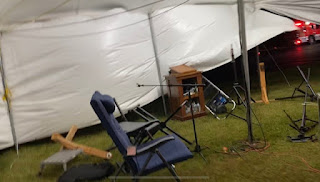 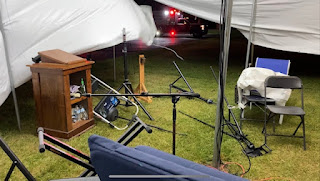 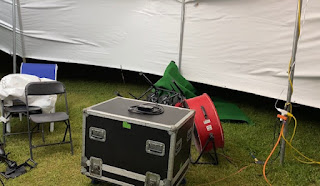 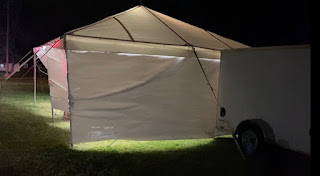 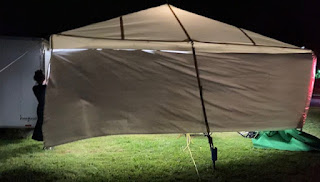 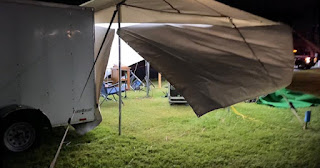 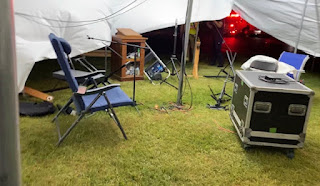 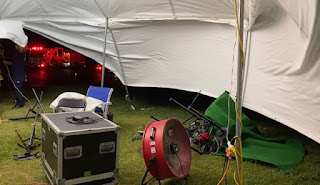 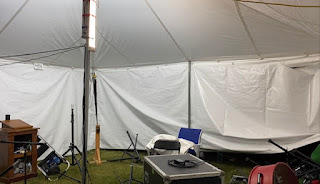 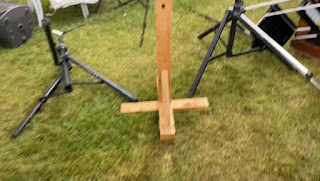 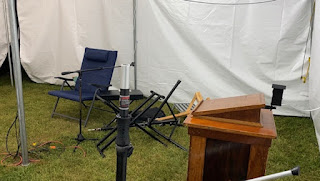 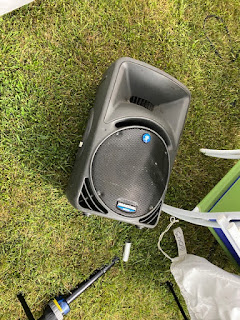 One of the sidewalls took a couple of punctures 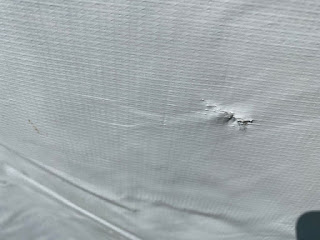 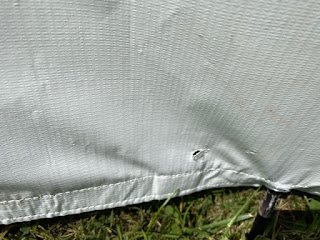 The tent top is not punctured, but it has several places that are scuffed and stretched thin. Here are three examples of many. 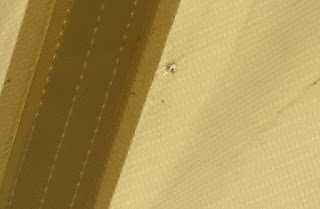 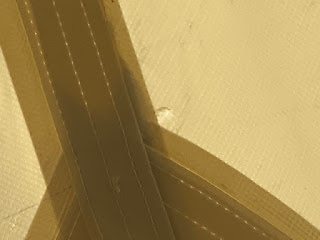 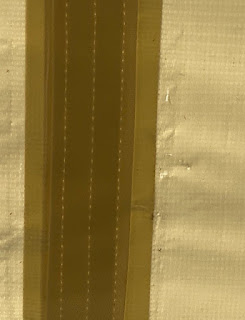 Tent/Cruise-In Revival Update
We enjoyed another super great service with a good crowd gathered too. It rained hard as we were setting up our sound and then stopped about 30-40 minutes before service. Rain was on the way so we cranked up early to make some hay while the sun was shining or at least have church while the sky was not raining.

It did sprinkle most of the service, but some of the folks still sat outside their cars and I preached most of the message out in the weather. It was a wonderful atmosphere! Praise God! I am expecting to hear of some great things God has done.

By the end of the service, people were rejoicing outside of their cars in the rain! This service will be a highlight for us for a long time. Hallelujah! A day that began pretty rotten, ended very well for us.