I posted recently about ten years of writing here on Mile Markers and I appreciate the positive response we received from that. Pastor Doug Stevens created this graphic of that event and posted a link to it for all of his friends on his website. 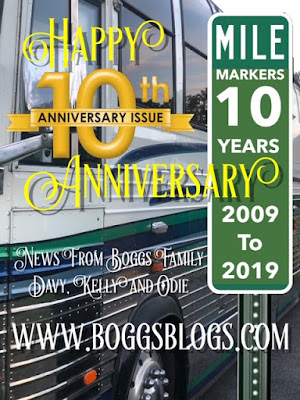 Thank you, Bro. Doug. That was nice.

We had another milestone pass this summer. We were so deep into tent revivals that we recognized it ourselves, but let it zoom by on Mile Markers. The actual week of the milestone we were in the camp meeting at Elco with no cell signal, so posting a lengthy post about anything was out of the question.😀

The first week of July marked 20 years since we put our home up for sale in Ohio, I left my job at GM and we moved to Kansas to work in fulltime ministry again. It has been 20 great years.

It began in February 1999 when I received a call from Pastor Terry White. He told me that he was resigning as Pastor of New Horizon Holiness Church in Wichita and he asked me if I might be interested in being considered for the position of Pastor.

After a few phone conversations with the deacons of the church, they told me they would pray and get back to me. We discussed it with our Pastor and committed the matter to prayer. In late April they called and asked for us to go to Kansas for a weekend and preach for them.

We had preached three or four revivals for Bro. White in the past, so we were no strangers to the church. We made the 800 mile trip there to preach and then had a long frank conversation with the leadership. They set a date for a church meeting and voted in favor of us being their Pastor.

If my memory is correct, we drove to Wichita six out of the next seven weekends so that we could be there on Sunday and I think Kelly Jo and Odie went with me all but one of those weekends.

In the meantime, we prepared our house for sale, gave notice to my job and finished some side jobs that were in progress. On about the first of July, we pulled a big moving truck in front of our house in West Carrolton and 17 family members and men from our home church help us load it up.

Two days later, the moving truck was parked in the parking lot of the church in Kansas. Finding a place to live in Wichita had been an adventure and we finally had rented a house on the same road as the church, sight unseen.

That proved not to be the best decision I have ever made. Unknown to the owner and completely unknown to the church people that recommended the house, the previous renters had moved in several cats and ferrets. The house was a mess and absolutely infested with fleas.

It took us a full week to tear up the carpets, bathe everything in bleach, evict the fleas and bring the house into some kind of order suitable for living. It was a memorable adventure to be sure and a stressful but funny way to begin our pastorate.

We pastored New Horizon Holiness Church from the middle of May 1999 until the first Sunday in January 2003. I will forever be grateful that those people took a chance on me and allowed us to be their Pastor. They were very kind to us. I can honestly say that I spent nearly every moment in Kansas with great anticipation of standing before them to do my best to deliver the Word of God to them.

At New Horizon I was surrounded by people that were a joy to lead. We enjoyed the worship, we loved the services and I thrived on the fellowship with some great men and women.

The nearly four years spent there, forever shaped our family and played a huge part in preparing us for the ministry that God has called us to at this point in our lives. We were thankful for the blessed opportunity to serve them and it was with a heavy heart that I announced to them in December 2002 that we would be leaving soon.

I was not completely certain what the future would hold when I preached my last pastoral sermon for them on Sunday morning January 5, 2003. I discussed the situation at length with my Pastor. I wanted to KNOW exactly what to do. Bro. Bennie finally said, "IF we knew exactly what was going to happen in every situation, faith would not be worth one thin dime."

Okay, I get that. It is time to step forward, Davy boy, and we did.

I preached that Sunday and Monday night for my good friend, Pastor Rickey Searcy, in Oklahoma City to kick off a revival for his evangelist that was trying to get there. Tuesday we finished putting everything in storage in Wichita and Wednesday night we began revival in eastern Kansas for Bro. James Fellers.

Friday night of revival we were singing "On Time God" and the Holy Ghost covered us up. I can not explain it all and I do not expect everyone that is reading to understand it all, but we knew as a family, we were walking the right road. All we have done the 16 years and 10+ months since that day is to keep walking the same direction.

Before we knew it 20 years have passed since we left Dayton, Ohio with everything we owned and headed to Wichita to Pastor a little church. I remember driving the moving truck and pulling a 1990 S-10 pickup behind and Kelly Jo following in our 1988 Lincoln. I was saying to myself as I drove, "What in the world am I doing?"

Those first few weeks in Wichita seemed to drag on forever. It took us four months to sell our house in Ohio and that seemed like a year or more. There was more of, "What in the world am I doing?"

Leaving the comfort of living close to our families, the security of our great home church, the greatest Pastor in the world, the best job I had ever had and the only house we had ever owned, was not an easy step, but it was the best step we ever made.

I think we may be able to handle 20 more years. That will take me and Kelly Jo to 72 and 71. Maybe then we could Pastor a church someplace warm in a community of seniors, as long as we could still drive the bus once in a while.😅

Davy
Posted by Davy, Kelly and Odie Boggs at 1:48 AM