There is a conspiracy against me by Apple, Montana, California, KJ and Odie.

Coming from a guy that changes locations, churches and people every week, this may sound strange, but I do not enjoy change. I absolutely love our life road and I am good with those changes, but some changes fill me with dread.

I like having Kelly Jo near me at all times, no change. I like wearing the same hats, the same shoes, the same work clothes and the same suits. I like using the same sound equipment, the same iPad, the same computer and absolutely the same phone.

I do not like to change phones and I do not like updating the software on my phone. How about we get the phone and software we like and all live happily ever after. Why do we have to mess with a good thing?

In 2004 or somewhere around there, Bro. Mitch Boggs purchased a Razor phone for me. It was the first phone that I did not have to fight with and I decided within days it was my life partner. I kept it a lifetime in cell phone years.

The iPhones came out in 2007 and I felt no need to upgrade at all. By 2008, I had read enough and seen enough that I knew I should probably catch the smartphone wave. It was obvious even in that first year that so many things in our lives were going to be easier done with a smartphone.

In the summer of 2008, I purchased the second generation of the iPhone and once I learned it, I was satisfied. I kept it for years and never updated the software. Eventually, it became as slow as molasses and even a software upgrade could not help. Life and technology had passed me by several years and the future refused to accept my phone.

I begrudgingly updated phones and spent days dealing with user unfriendly iTunes and transferring everything over. That did nothing to soothe my fear of phone change and somewhere in the process, I began taking Kelly Jo and Odie's phones after they upgraded to new phones.

I still had to change over, but I could go in small leaps while letting the girls learn new scary things and teach me when I was ready.

That put me perpetually 4-5 generations behind the latest iPhones. My tech wizard friends looked down their geeky noses at me and thought I was a total Luddite, but I was perfectly content.

This year though, my phone has jumped off the deep end. It was doing crazy things. Kelly Jo and I have witnessed it several times. It was weird.

I would start typing a text and then the phone would take over. I would lay the phone down and then it would type its own text. It would type, erase, type, erase, change to a new person, type and erase, type again and eventually calm down. Thankfully it never sent any of the texts as far as I know.

It would open random apps, close them down and freeze for minutes at a time. It was funny sometimes, but it would usually act up when I needed to actually talk or text with someone.

It became clear on our way west that I would have to do something sooner rather than later. No sales tax in Montana coupled with ridiculous sales tax and made up fees in California pushed me over the edge.

We have made major electronic purchased in Montana before because of no sales tax and we have done business with a particular ATT store in Missoula several times. I backed up my phone to my computer about midweek while in Montana, psyched myself up and finally went to the store.

As is almost always the case, the iPhone stock was limited and my first and second choices were not in stock. I went with what they had and a few minutes later I was on my way back to the bus.

With a phone at least four generations ahead of mine and no telling how many software updates ahead, I was completely lost. I handed the phone to Kelly Jo and in a few hours, she had my world making sense again. Between her help and Odie's help buying the phone, I have now been dragged into 2019, just as 2019 is preparing to fold its wings and fly into the future.

I will say the camera is way better than even Kelly Jo and Odie's two year old phones. We have admired the pictures from Galaxy phones for years and this may even compete with that.

I took four pictures with it for you to see. This picture was taken from a distance on Saturday evening. 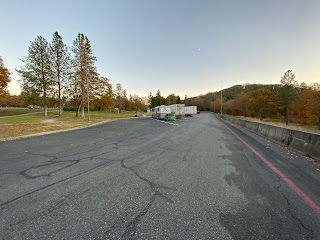 With one simple move, the phone can zoom closer and still get a good picture. 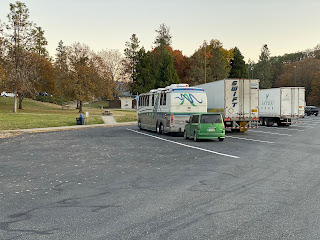 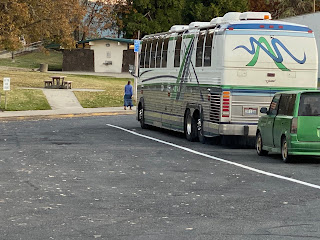 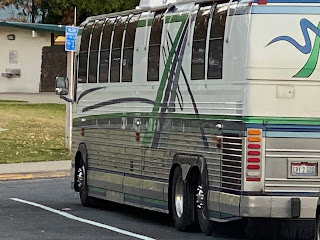 My previous phone was a chore to zoom and it would have been a grainy mess on the second picture and never zoom in this much.

I offered the new phone to Odie and Kelly Jo and I would take their old one in exchange, but they both declined. They will upgrade to something better in a few months.

I may settle in with this one for the next 8-10 years.

Posted by Davy, Kelly and Odie Boggs at 2:03 AM