Do you have time for a little bus talk? This is the bus and the Green Machine on Tuesday morning. 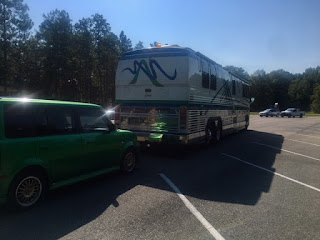 1995 Prevost XL
We have been kind of tied up with tent revivals and I think I neglected to tell you about some bus information from last month. I say "I think" I neglected because I meant to write about it but I can not find any record of it.

You may remember the bus trouble we experienced in January and February in Texas and Alabama. When it was all over we changed the oil in Ellisville, Mississippi. It had only been a little over 1700 miles since the last oil change, but there had been a lot of work on the engine in the interim.

After the second repair, Bro. Brad Nicholson (Our mechanic friend/hero from Richton, Mississippi) was concerned there might be damage deeper in the engine. He and Jeff Rowe (The bus guru/friend) came up with a plan to help make sure everything on the inside of the engine was OK.

I had the oil analyzed from that oil change and that gave us a baseline from which to judge things going forward. The plan was to either change the oil or draw an oil sample after about 7500 miles. However, the 7500 mile mark came during our New England trip and we could not find anywhere to get an oil change along the interstate.

On our way to Central City in August, we stopped for an oil change in Pendleton, Kentucky. I had them save a sample for me and I mailed it to the same place the other samples were done. When the results came in, they were full of good news.

Everything in the oil sample checked out good! Hallelujah! That took a big load off of my mind. It is very important to take care of our investment in the BoggsMobile and keeping the engine running smoothly is a big part of that.

Maybe the big bus saga from early 2019 is really over. I will try to change the oil again at the next 10,000-mile mark for further confirmation that all is good.

Thank you for checking in today.