Thinking Out Loud About Tent Revival

I have definitely been in a sentimental season the last few days. Thinking about whether or not I should replace part of our current tent, has me thinking about all of the wonderful great times we have had in tent revival.

Our tent is an object, a tool. In our transient lifestyle, we cannot afford to get attached to objects or tools. A tent is a tent is a tent. There is no magic or spiritual significance in a tent. Not your tent, not my tent, not any tent.

I read a while back that a "ministry" had acquired some canvas from A.A. Allen's tent. They were offering to send a small piece of the tent for a donation of only $2000.

"We are reserving every inch of that canvas for a special purpose. We believe that even as the five broken loaves were made to bless thousands more because they were broken, even so the remains of the old canvas can bring blessing, yet, to thousands."

"They are available (as supplies last) to those who will make a donation... There are only a few pieces left. They will be gone soon. These pieces of Allen's tent are not being sold. They are simply a gift to those who make a special donation.

The gall of the con artists that pull such scams is only surpassed by the gullibility of church people that swallow their deceptive rip-offs and shams. I am sure the charlatans sold out of their limited supply of tent canvas several times!

I repeat, there is no magic or spiritual significance in a tent. Not your tent, not my tent, not any tent.

What I am sentimental about is the wonderful spiritual events I have experienced and witnessed in countless other lives all over this country under an otherwise worthless blue and white tent. There are times that I kneel to pray and began to see faces of people whose lives have been changed and before long I am a blubbering mass of tears of joy. Wow! God is a good God.

It is amazing that He has allowed our family and still allows our family to be a small part of His work. God is not helping me in my work. No, I am trying to hang close to God's work and stay out of God's way as He works in spite of me hanging around!

Our very first tent revivals were under our GP Medium Army tent in Wichita, Kansas. What wonderful memories we have of two revivals in the spring of the year next to the New Horizon Holiness Church. I believe our first two tent revivals there took place in 2001 and 2002. Those revivals were instrumental in awaking the evangelist in me.

During our first few years of evangelism, we would occasionally be invited to preach outdoor services or under someone's tent. We always loved it and looked forward to it with great anticipation.

Our first year back on the road, we scheduled and conducted two weeks of outdoor revival in eastern Kentucky. The Outreach Revival was on the old road that leads to the hollow where my mother was born and raised. God had impressed on me years before that I should preach a revival in that area and it finally came to pass.

A year before, I began to inquire about a place to set up a tent there and found that a first cousin lived up that hollow and had constructed a pavilion for bluegrass singings. He had bathrooms, camping hookups and a concession stand AND he made it available for us to have revival.

It was perfect for that setting although we did not have a built-in crowd up in that hollow. There are not a lot of houses up there. But we always felt like God sent the right people to those services on the right nights and I loved every second of it. Over the next five years, we held four revivals at my cousin's place.

Those meetings were instrumental in formulating the ministry philosophy that we use in tent revivals today. We praise God for sending us there and teaching us there.

During our first tent revival the summer of 2001 in Tulsa, Oklahoma, God began to roll out a little more of His plan to us. We started getting calls from other churches.and other Pastors wanting us to hold a tent revival for them. When I told them I could not get to them, they said they were perfectly willing to wait until next year.

Next year? Wait, what? Who said I would be doing tent revivals the next year? I already had a full slate of church revivals scheduled in 2012. Who has time or inclination to do all of this again next year? Well, it turns out that God had both time and inclination and we felt like He wanted us to go along for the ride.

All these years later and many hundreds of nights under the tent, we have one thing to say. It has been a wonderful ride, LORD! We are so happy you invited us along and we are willing to ride on until the end.

That first year, 2011, we were using a borrowed 30x40 white tent and 100 chairs. We hauled the tent and chairs, Mr. Cheap Jeep and all the tools we needed in a nearly new 24' trailer. Bro. Jimmie Radcliffe sold us that trailer at a great discount from what it was worth.

We did seven tent revivals that summer in five states. Bro. Jimmy and Sis. Shauna Millikin helped us in four of them. 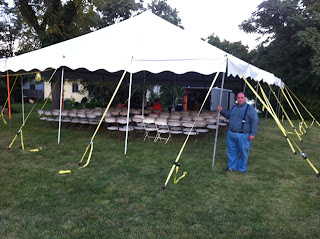 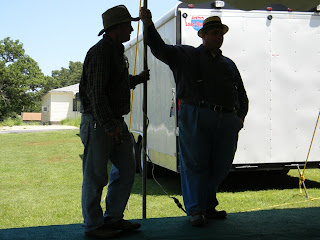 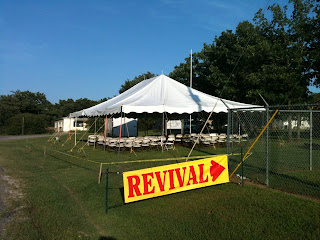 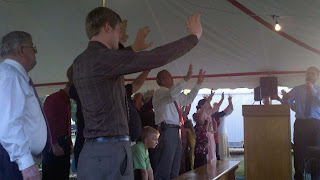 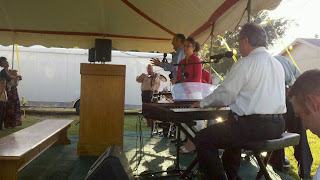 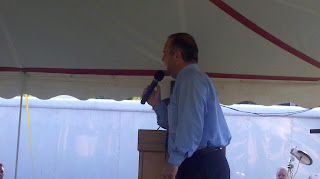 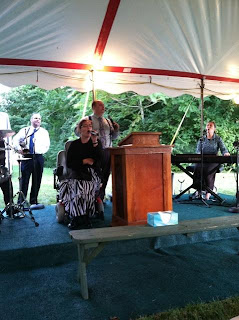 The white tent with red accents belonged to Pastor Chris Whiffen in Florida. I had tried to purchase the tent and small trailer from Bro. Whiffen, but he refused to sell it. He said that I could use the tent until the Lord came back, but he was not interested in selling it.

That agreement worked perfectly until I almost lost that tent in a storm in Miami, Oklahoma. We did not lose the tent, but Bro. Jimmy Millikin and I worked very hard overnight during the storm to save it.

I realized that if Bro. Whiffen's tent was destroyed, I would be buying two tents. I would buy a replacement for my friend and I would be buying one for myself. I decided that night to buy one tent for myself instead. That is how the Blue and White Gospel Tent came into existence.

I continued to use Bro. Whiffen's tent all summer in 2011 until we arrived in Richton, Mississippi. Pastor Scott Morris had asked me to preach a tent revival in the park, something they had already done in previous years. They had access to a large tent and thus our first tent revival in Richton was under that tent. I posted pictures from that revival yesterday.

Bro Scott and I had no idea we were getting something started that is larger than the both of us. The annual tent revival in Richton has become a highlight of our year. We look forward to it all year long. I supposed we will keep this revival going until either Bro. Scott or I feel like we need to go a different direction.

Whenever that day comes, the Boggs family will always look back on tent revivals in Richton, Mississippi with our friends and family here with the fondest of very blessed memories.

Time, space and your attention would run out if I told even a small portion of the blessings we have experienced in the years of tent revival from then until now. 2016 was the year of City Reach and I am sure I could exhaust you talking about that.

We have been tremendously blessed by God to be allowed by God and His people to minister the way we have the last several years. I believe I will run on a few more years, by God's grace, and see what the end will be.

Isn't it great to be in service to the Lord? Thank you for stopping in today. We hope to have tent revival pictures tomorrow.

Davy
Posted by Davy, Kelly and Odie Boggs at 1:35 AM