I will have pictures of the tent going up later in the week. I am happy to say it did go up well. Praise God! Several men and women answered the call and came over to Macedonia Middletown to help us. 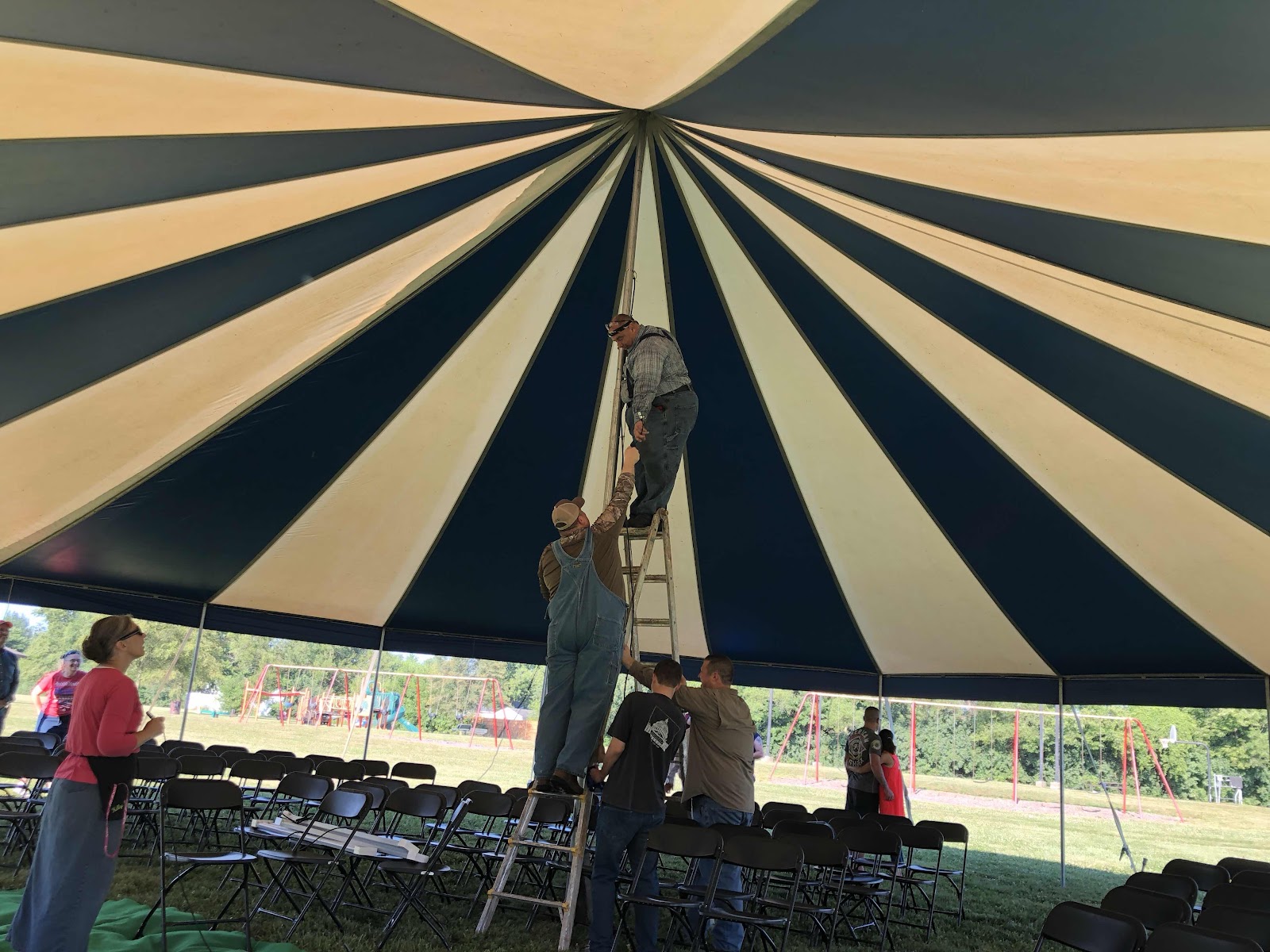 Before we get to that, the weekend started Friday with an early morning wake up call so that we could get the ball rolling toward getting the tent trailer into position. Kelly and I both had several things to do, but Odie's house took the priority spot.

It appears that the rubber boot around one of the plumbing vents on her roof was damaged in the bad ice storm we had this past winter and the monsoon rains from the last several weeks allowed a little water in. We spent some time on that and once we have it all resolved, I will have more on that.

That ran us a little later than we planned, but Dad was there to help us and we pulled out of the Ranch a few minutes after 1:00, right on time.

Here is KJ backing out of the barn. Once out of the barn, we did the work of the evangelist, rinsed the generator radiator, turned the bus around, hooked up to the trailer and we hit the road. 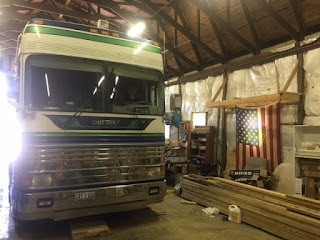 Odie took a few pictures of us pulling out of the Ranch Friday. From the rest of the pictures, it looks like she went to eat with family at some point. 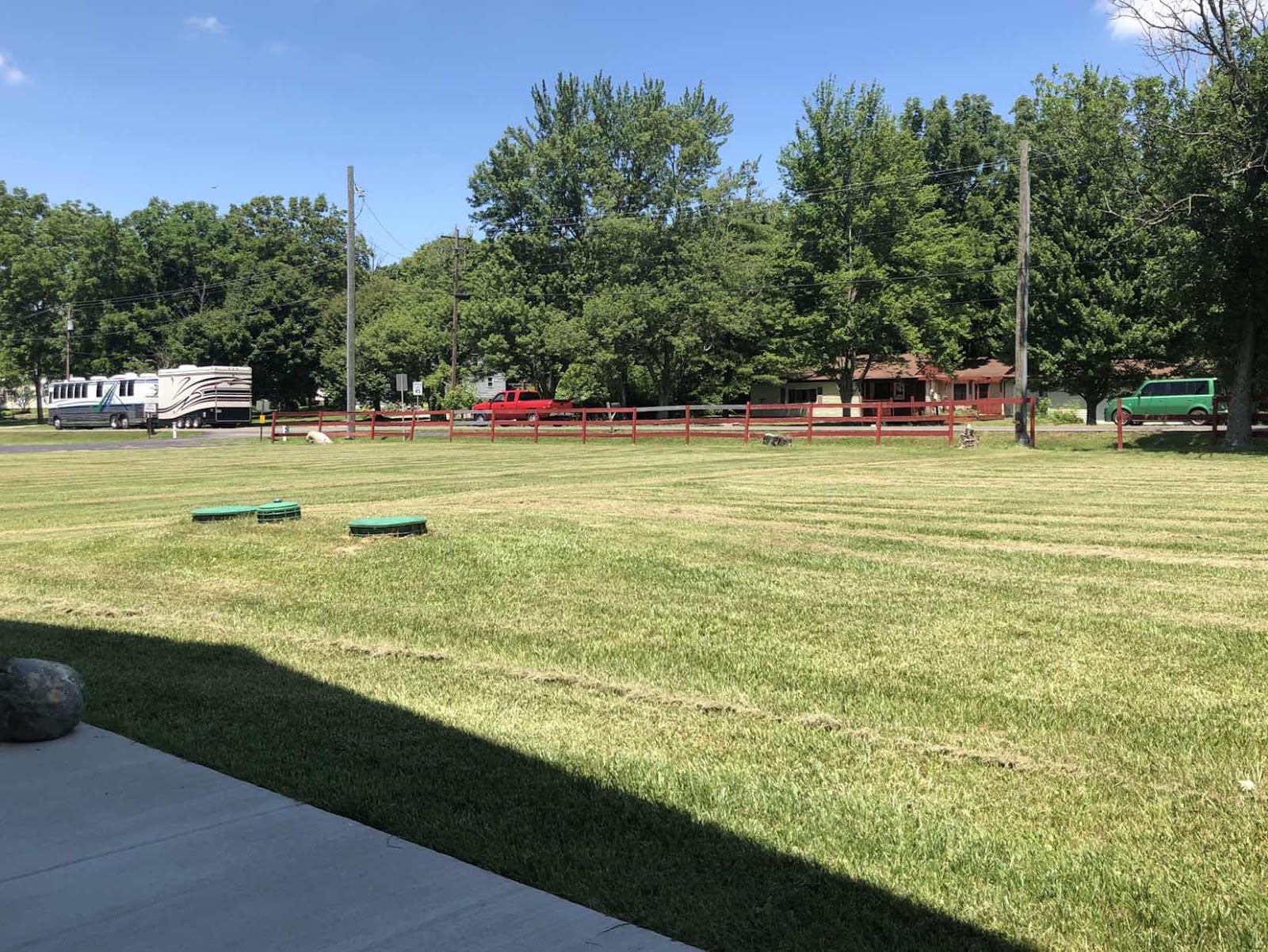 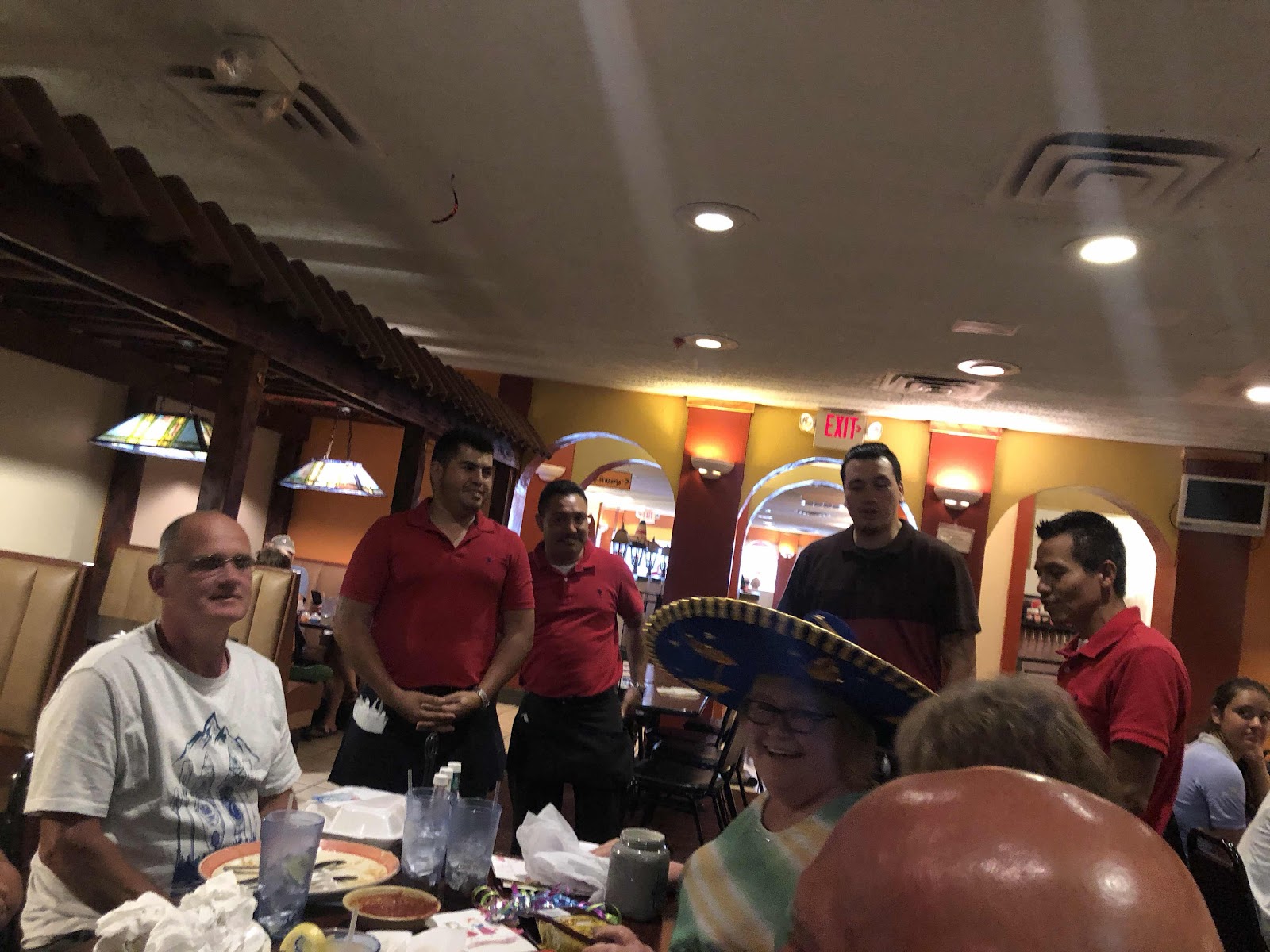 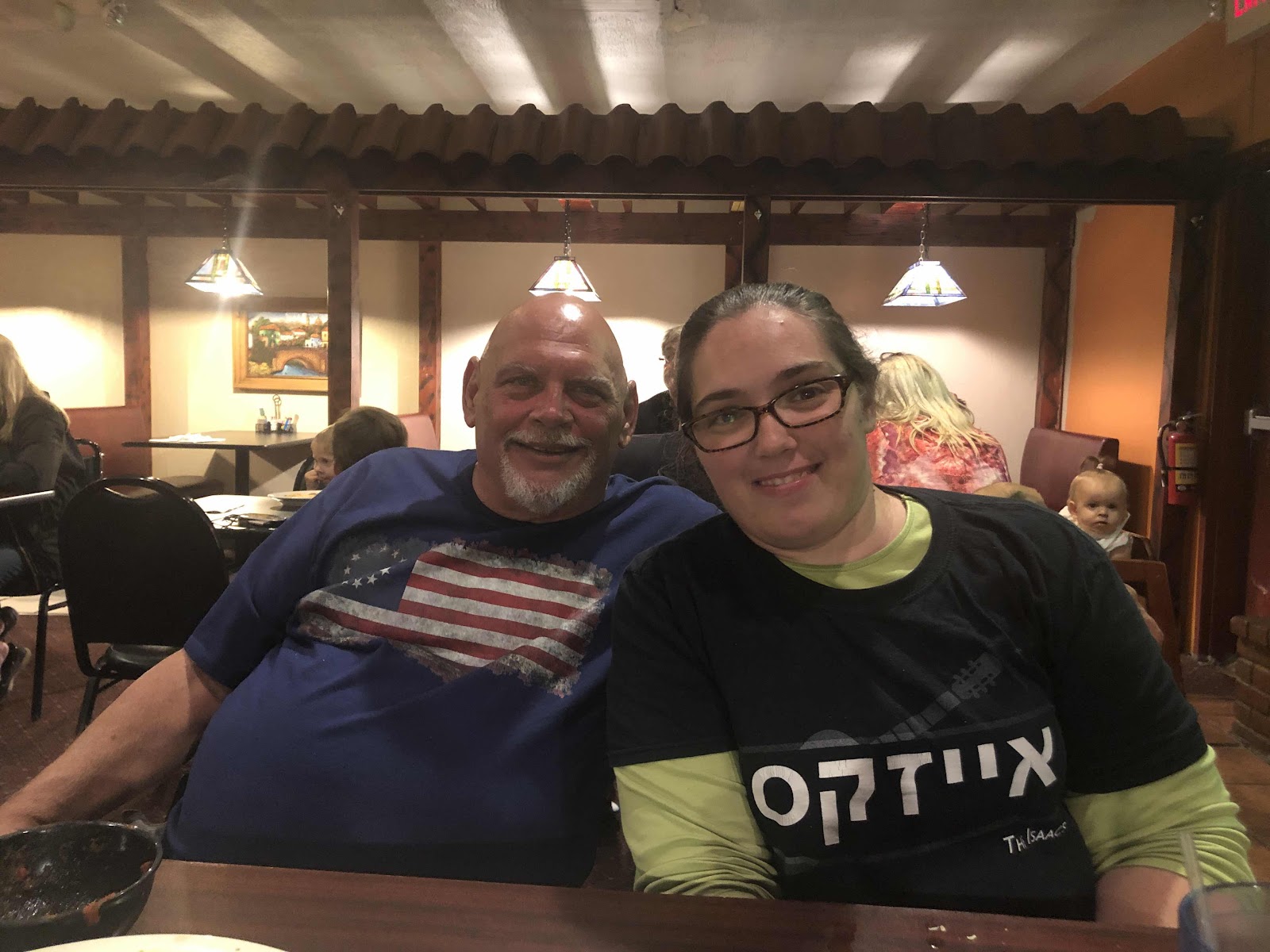 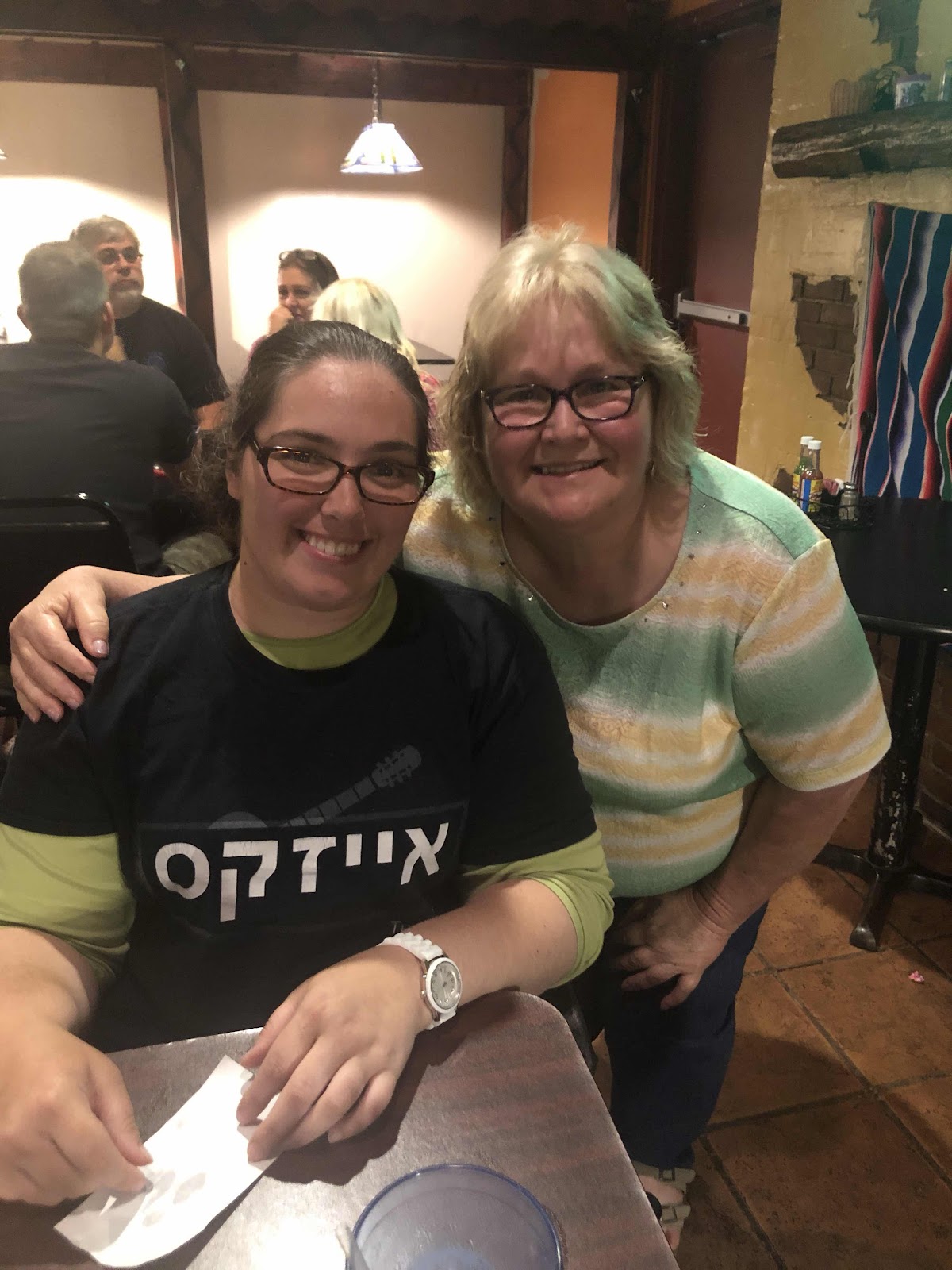 By a few minutes after 2:00, we were pulled into Damon Park and the trailer was put in the right position with Dad's truck.

We really did not have to be here until evening, but I did not want to take a chance on the narrow roads getting plugged up by parked cars on Friday evening after people arrived home from work. We thought it was best to come early and we were right.

There are nine roads that enter this little neighborhood and you can take any of them and meander around to the park. We drove the car around earlier this week and looked at every one of the roads and ALL of them were impassible to the bus and trailer except one convoluted route and it was CLOSE. We mapped out that route, the only passable route because of trees and wires, and made it in with no problem. Whew! I would have hated pulling someone's cable box out of the wall and had a TV or two bouncing down the road behind me.

Once we were parked, we took Dad for a bite to eat and then we rested a bit. A few minutes after 7:00 Kelly Jo and I determined the best placement for the tent and marked the stake line with orange paint.

Steve and Karen brought us a few things we needed and we visited with them and JoJo until about dark. They are always so willing to help us and we appreciate it very much. Pastor Allen and two of his children stopped by for a few minutes too.

Steve took this picture of the BoggsMobile and the Green Machine. 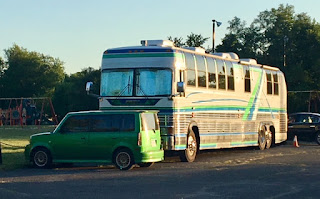 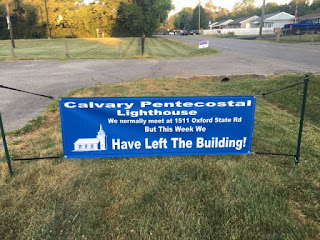 This is about 6:40 Saturday morning before the contents of the trailer have been made ready to the crew to begin working. 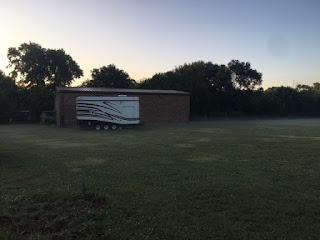 Plenty of help showed up at 8:00 and a few minutes after. We began getting stakes out of the trailer at 8:00 on the dot and soon the tent was in the air.

After most of the tent work was completed, I had a little tent trailer job to do. Somewhere on our way between Oklahoma and Illinois, I lost the door to the electrical cord compartment on the trailer. I must have left it unlocked and the door could not stand the wind. All that was left was a broken frame.

The trailer is off white with striping, but all I could find online was white. I checked with my "go to" guy at Waynesville Camper, but he was fresh out. I finally found a black door and frame at about double the cost and I ordered it. It does not match exactly, but it looks better in person than it does in this picture.😀 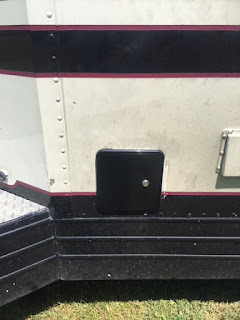 The rest of Saturday we piddled with the tent and visited with people that stopped by. It was a good evening. Kelly Jo and Odie went to eat with KJ's parents too.

Sunday morning, while KJ was watching the tent, I drove about four blocks to the Calvary Pentecostal Lighthouse to talk to them a few minutes about what to expect in the tent revival services.

I drove by to check the condition of my banners on the way back and one of the stakes had been broken. It is probably a random event, but it did cause me to watch the tent a little closer last night.

The first service under the tent was great. 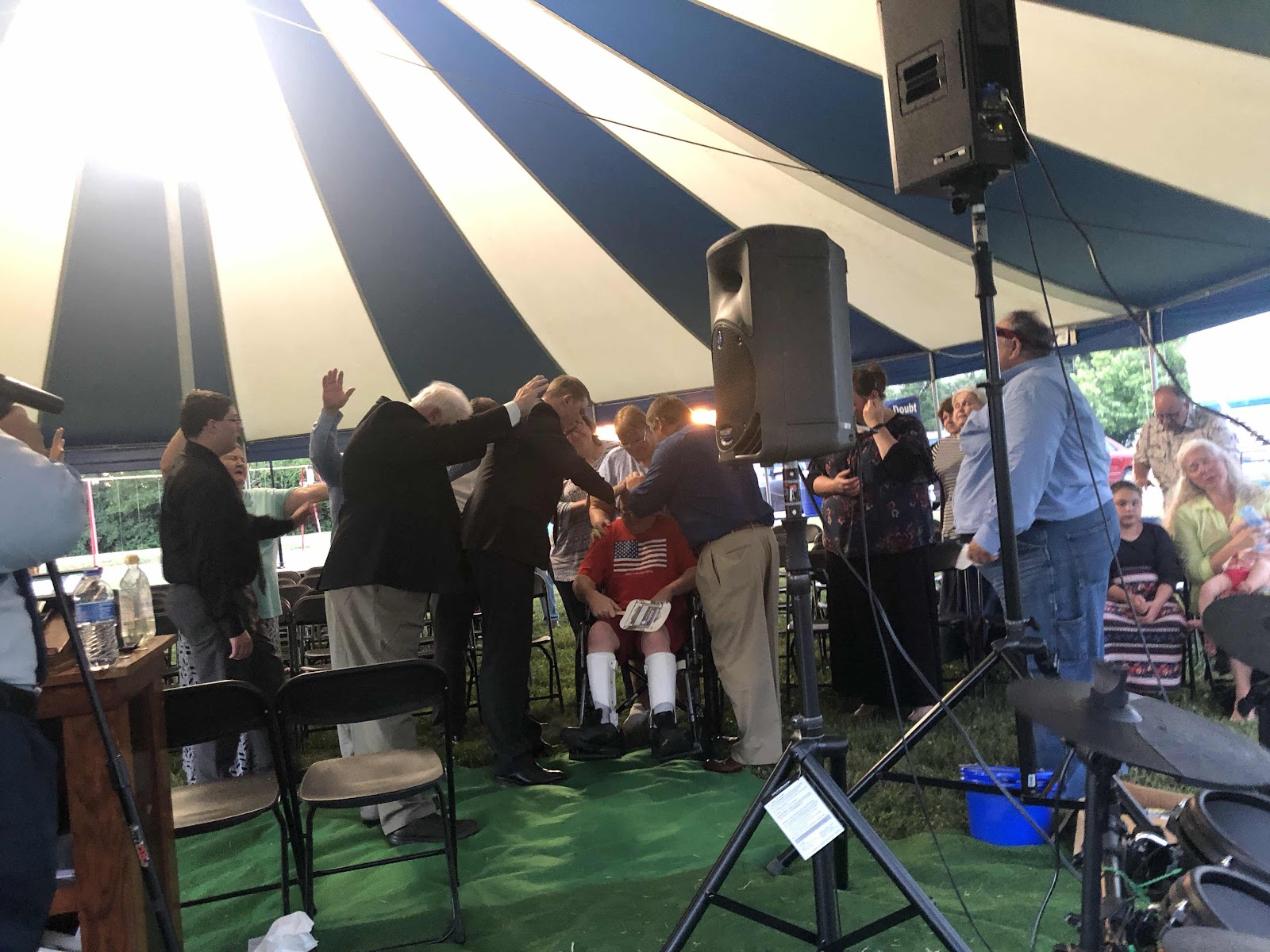 My parents and Steve and Karen were at tent revival Sunday night and the Eldridges drove up from northern, Kentucky too. We also had our band from Dryden Rd. with us. I will write more about that later. It was super wonderful to have them all.

We had several visitors from the neighborhood with two different sets of people from two of the other churches close by. That was an encouragement to us. It was also great to have unchurched people under the tent and a whole lot more listening in the surrounding area. We are looking for great things.

That wraps up the weekend. Please come be with us if you can this week. We are so grateful for the visitors last night. Thank you for reading today.