You would normally expect a weekend review post on Monday morning, but we have a lot of people that have been patiently waiting to hear about the bus. It is a very long story going back 10 days so combining that with the weekend post would be way long.

I will give you the bus update today and try to have the weekend review on Tuesday. I know that many of you have been praying for us and the bus. Would you include me specifically for a few days? I have been tender in my back for about two days and Sunday it was hurting too much to call it anything but pain. I was able to preach, but not without difficulty. God is able and I am expecting His touch. Thank you.

BoggsMobile
We closed revival in Citronelle, Alabama on Thursday night the 21st and Friday morning we planned to crank up the BoggsMobile and drive a little over 90 miles to Ellisville, Mississippi. We had plans that night to attend the Wild Game Supper at First Assembly in support of the school and then we had big plans for Saturday too.

All of those plans came to a screeching halt when I sat down in the driver's seat Friday morning, turned on the key, gave the computer time to clear, turned the key to the start position and the engine instantly turned over, but would not, could not start. Ugh!

That was not how that day was supposed to go at all. Ok, breathe, pray, plan and do whatever is the next right thing to do.

Breathing, praying and planning. I knew that I needed to call Bro. Brad Nicholson from Richton, Mississippi a little over an hour away. He has offered to help any way he could on the bus, so it was time to make that call. I explained what was happening and he said he would be over later in the day and hook his computer up and read the error codes. Cool, that is a plan.

While I was waiting, Jeff Rowe, my hero and friend from East Tennessee Luxury Coach, walked me through some voltage checks. He was looking at the electrical schematic for my bus and telling me where to check for voltage and such. All the wiring and relays in the start cycle checked to be operational.

All of that was good to know. Now we would see what the computer would say.

However, when Brad arrived he discovered he did not have the right adapter for my bus. He had an empty place for it in his new kit, but no adapter. He called his tool guy and got the adapter on the way and then he jumped in with his tools.

It looked and sounded like the batteries were plenty strong and the engine was turning over great. It seemed like it was getting no fuel.

Okay first thing, is there fuel in the tank? Yep

The crank sensor and cam sensor must read correctly or the computer will not send a signal through my new wiring harness to the fuel injectors. He took those out and they both checked good. We later replaced them anyway, just to be sure.

For kicks and grins, he put a gauge on the fuel line to check for pressure and the pressure was almost nonexistent when cranking. What in the world?

He removed the fuel pump and discovered this. 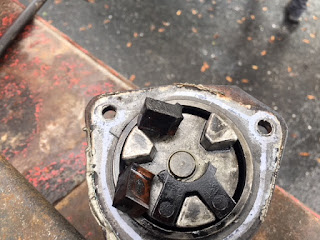 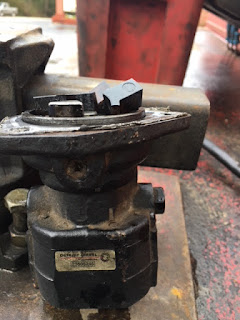 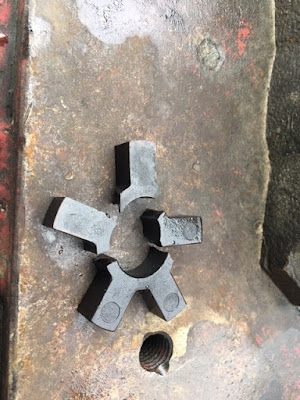 That is definitely a problem. We spent about 90 minutes running toward Mobile to Empire Trucks Sales and Service to get the fuel pump. 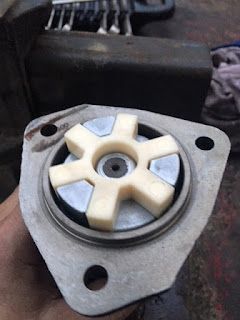 Once the fuel pump was installed, we hit the starter and the bus cranked and was running in an instant. Oh, yeah! That is what I am talking about.

We shut the engine down so he could remove the fuel gauge from the line and the engine would not start again. Wow! Roller coasters make me sick! The bus never did start again Friday or all day Saturday!

Saturday morning Brad arrived with Pastor Scott Morris and Brandon from his church. The first order of business was hooking up the new adapter to the bus and looking for error codes. We needed some information to go on.

Brad's computer recognized my transmission immediately, but never did recognize the engine. We thought it was a problem with his software, but he was supposed to be loaded with all of the latest software and licensing. Ugh again!

All day Saturday they checked and rechecked everything over and over and still no running bus. We thought for a while that maybe we had a problem with the fuel line from the tank back to the engine. We chased all of that for a couple of hours.

At the end of the day, we admitted temporary defeat and prepared to take the Green Machine to Ellisville, Sunday morning. Brad, Scott and Brandon worked diligently and I felt as sorry for them as I did myself.

Monday Brad decided to go to the bus, remove the ECM (Engine computer) from my bus and have it read remotely. He found that Burroughs Diesel in Laurel could read it so he brought the ECM to church Monday night.

I took it to Burroughs Tuesday morning and the technician took it in the shop to read it. He was back in the office in only a few minutes and he told me the ECM was good. What?

I ask him if there was any way to read any codes it had been throwing so we could have something to go on. We were lost without some information on the ECM. He said he could probably do that.

He was gone 20-30 minutes that time. He booted up the ECM and began searching through the information when the ECM shut down. He tried everything in his bag of tricks and the ECM never booted back up.

When he brought it back he said, "You were right." After I got over the shock of someone telling me that I was right about anything, we discussed what to do. I had been dealing with Curtis at Burroughs and he took me in to see Leon the parts guy. Leon got right on it, knew exactly what he was looking for and had a new ECM on the way in moments. It would arrive the next morning.

This is the sticker on the old ECM. You can see it was remanufactured in February of 2008 and it was installed on our bus the week we purchased it in March 2008. The previous ECM had a problem and the seller replaced it as part of our deal to purchase the bus. 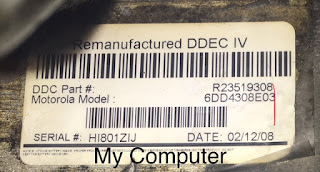 Wednesday morning I took the old ECM back to Burroughs. They were hoping it would boot up one more time and they could download the programming for my engine from it. It was dead and would not arise. It is my understanding that they downloaded the programming from Detroit. I gave them the numbers for the new fuel injectors and they said they would program those numbers in as well.

This is the sticker for the new ECM. 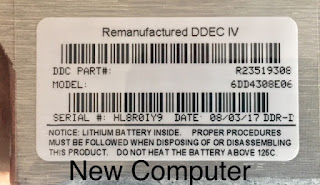 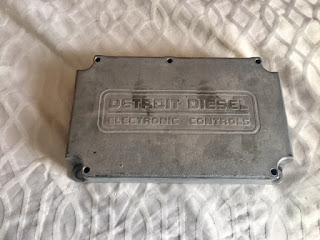 Wednesday night after church I took the new ECM to the bus in Citronelle. Before going to bed I laid this handkerchief on the back of the driver's seat. 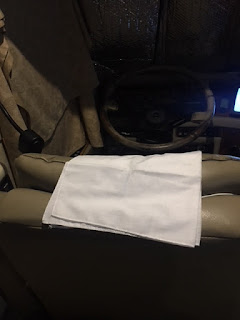 Pastor Dennis King and the church in Gainesville anointed this cloth on Sunday morning for our needs and sent it to us. I wrote about them doing that for us in Monday's post. The hanky is a tangible reminder to us that the House of Prayer in Gainesville, Texas is praying diligently for our needs. There is no magic or power in the oil or the cloth. It is visible evidence that someone has faith enough to believe God for us.

House of Prayer and many others assured us they would be praying Thursday morning as Bro. Brad hooked up the ECM and we cranked the bus. We count on the prayers of God's people and trust God to hear them and answer them.

The ECM mounts down low in the passenger side of the engine. This the fuel line going into the primary fuel filter in front of the ECM. 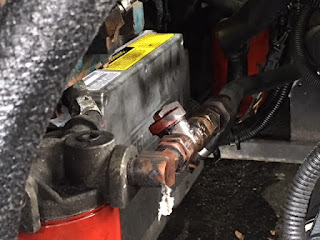 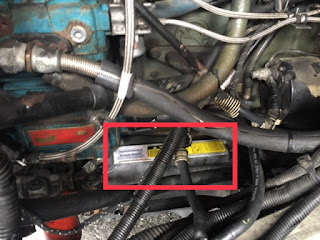 We had a fuel line running from a portable container of diesel into the fuel pump. Once the ECM was installed and we had prayed a sincere prayer, I turned the switch to rear start, pushed the button and it fired right up instantly! Praise God! I know you can not see it running, but the picture below was taken only moments after it started. Trust me, it was running and I was rejoicing! 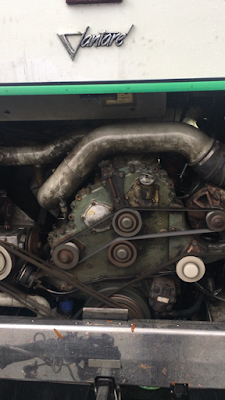 I wanted to let it run forever, but we were running off of a five gallon can and needed to switch over to the fuel tank on the bus. I reluctantly shut it down and Brad filled the fuel line with diesel and hooked it to the pump. I pushed the button and it came to life again. It has started every time since then. Hallelujah!

Brad has a few concerns that we are checking, but it seems that the ECM solved the "off and on" glitches we had been experiencing. We may not be finished working on the bus this time, but this major hurdle seems to be cleared. Praise God.

I am so thankful for Brad's hard work and diligence. He made trip after trip to us and spent many hours working on the bus and many more hours working it over in his brain. We would not be running without him. Thank you, my brother.

Jeff Rowe is amazing. I appreciate his willingness to help us from afar and guide us with his knowledge and experience. His advice and insight have been fantastic and we owe him big time.

Pastor Scott Morris, Pastor Andy Stringfellow, Bro. Brandon Walters physically worked on the bus or fetched parts over the last week. I appreciate every one of them too.

Also, I want to thank Pastor Darius Templeton and Cedar Creek church for being patient with us while the bus was broke down on their property. They were completely gracious and kind. That made things a whole lot easier on us.

First Assembly in Ellisville put their shoulder to the wheel in helping us deal with this bump in the road. They were also patient with us as we navigated through the latest obstacle course.

Time and space would fail me if I were to mention all the folks that called, text, emailed and spoke to us in person during this past week and let us know they were praying for us. Many, many hundreds of people were praying for us and I am grateful for that from the bottom of my heart. You know who you are and we thank you! Those who helped carry the load financially, thank you too!

We have driven the bus about 200 miles since the new ECM was installed and that is a good start!