It is not all fun and games out here on the road, but by God's grace, we can handle a few "First World" problems. Lest you think it is all Mexican food, terrific weather and awesome services, we let you see some of the bumps along the road.

Many of you may remember the astonishing gift of sound that came to us through Ben Isaacs for City Reach and beyond. 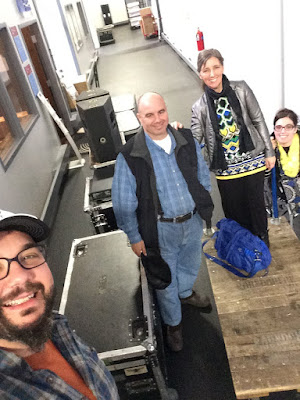 We have used and continue to use this incredible sound system under the tent and in churches all over the USA. We set it up and used it for the very first time in February 2016 at the House of Prayer in Gainesville, Texas where we have been in revival this week. 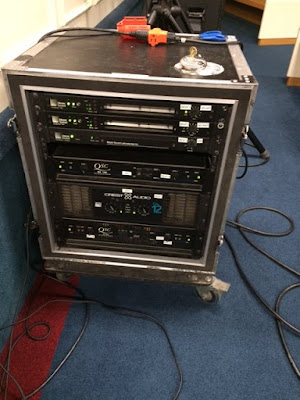 It is also the first place we loaded it in the BoggsMobile. 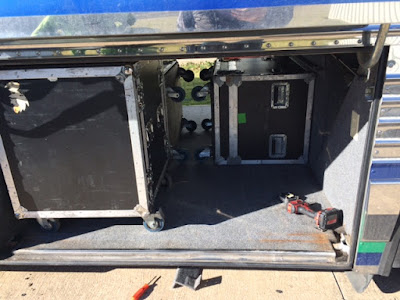 During tent revival season we carry some of the system in the tent trailer. Last year we added two very fine Meyer speakers that are smaller and self powered. That was also made possible by the kindness of Ben Isaacs.

With those two new speakers in our sound arsenal, we decided this year to leave most of the tent revival system behind until tent revivals begin later this year. We are fine with our smaller system except for tent revival and larger crowds in bigger churches.

That was working great until one of our old Mackies quit. Then one of the new Meyers had to be sent in for warranty work. We were still Okay because I had picked up another used Mackie 450 cheap at Guitar Center last fall. Until that new to us Mackie went out Sunday morning.😦

Yep, I could sense that dealing with this issue was going to be fun.

I hate to lose $90 as much as the next guy, but the worst part is time elapsing and being short one more speaker. However, there is a bright spot. I will have the other Meyer back soon and that will make all things well. They Meyer warranty is handled in house and is superb! Thanks again to Ben Isaacs and Meyer for that!

I have nothing bad to say about Guitar Center. They have done what they could. The only fault I find with them is using the same company for warranties/insurance that AT&T uses. You better believe I will be looking closely in the future as to who is standing behind the warranty.

When I told the representative on the phone that I thought I should get all the money back as the warranty stated, she offered to refund the money I spent on the warranty. Then I could keep the non-functioning speaker "as is". I almost took her up on it as a matter of principal.

Are we having fun yet? Yes, we are! It could be worse, you know. I could be pastoring a church. That sounds like fun.

Thank you for joining the frivolity!

Davy
Posted by Davy, Kelly and Odie Boggs at 6:32 AM