Last week I wrote some thoughts about our last 16 years on the road. It is our happy privilege to be doing what we are doing. Thank you for the kind comments, emails and texts. Today I am giving an overview of 2018 in particular.

We started 2018 worshiping with our home church at Dryden Rd. in Dayton, Ohio. It was great to be at New Year's Eve service. We love being home to attend and participate and receive from that annual revival. Although the winter storm that weekend was not all that fun. 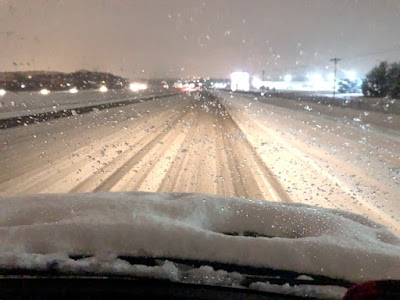 We began the year with no electricity. By the time we arrived at the barn at 2:00 AM New Year's Day the power had been off 6 hours. When the electric returned at 4:00 AM it was 41 degrees INSIDE the bus, proving we were definitely too far north. I am not the smartest boy my mama raised, but I am smart enough to know to go south!

They say "You can't fix stupid" but I do not even know who "they" are. I know where warm is located and a few days later we pointed the BoggsMobile south, mashed the throttle and let it eat. Several hundred miles south and two days later, it was finally warm enough to breathe! Never let it be said that a goose is smarter than me!

The first quarter of the year took us to revivals in Pine Prairie, Lousiana, Moss Point, Mississippi, Foley, Alabama, Mauriceville, Texas, Sweeny, Texas, Livingston, Texas, Ellisville, Mississippi, Dothan, Alabama and Douglas, Georgia. We had to cancel one revival because of a flu outbreak in the church and another because we wanted to attend Bro. Bill Houston's funeral.

Bro. Bill's funeral was a joyous occasion, but it is also one of the saddest things we have ever faced. Bro. Bill was a mentor to me in the faith and in evangelism. I witnessed first hand the passion he put into preaching and living for God. I experienced the way he approached revivals and the serious way he took his responsibilities concerning revivals. I will never be the man he was for God, but I will be a better man than I ever would have been without him in my life.

Bro. Bill was also a Dad to Kelly Jo and a Papaw to Odie. He was not blood kin, but he and Sis. Darien took us into their hearts over 30 years ago. Odie was his #1 granddaughter. People all over the USA still believe that Kelly Jo is his daughter and Bro. Bill never discouraged that.

The holiness people lost a great man when Bro. Bill went to heaven and we lost a dear friend and mentor. We are still daily praying for Sis. Darien. Without a doubt, she feels his loss more than anyone.

The second quarter of the year began at Wartburg, Tennessee and then on to attend PFYC and revivals in Millbrook, Alabama, Bristol, Virginia, Bristow, Virginia, Stanardsville, Virginia, Elkton, Virginia, Attended Bristow Camp meeting, Amber, Oklahoma, Oklahoma City, Oklahoma and Wichita, Kansas. We also had a couple weeks of working on the house interspersed in there.

The third quarter of the year began in Colorado Springs, Colorado, a drive back home, one service in Seattle and then vacation. After vacation, we preached revival in Lebanon, Ohio, Homecoming at Dodds and prepared for the open house and dedication of the house built for Odie. Next was Dryden Rd. Fellowship Meeting, London, Kentucky, Central City, Kentucky, West Plains, Missouri, McKenzie, Alabama, Richton, Mississippi and a short stop at Ellisville, Mississippi.

The final quarter of the year brought us to Wautauga, Texas, Gainesville, Texas, Oklahoma City, Lawton, Oklahoma City, Broken Arrow and Locust Grove, Oklahoma. Then we rushed home, dropped Odie off at the Lazy OD Ranch, prepared the bus for a visit to East Tennessee. From Knoxville Kelly Jo and I flew to Nigeria for a super great trip!

The services in Nigeria were awesome and the fellowship was superb. We were ready to get back to the states at the end of the trip, but I am way past ready to be back in Nigeria again. I sincerely love Bro. Shobanke and all of our friends there. God has knit us together with his love.

After returning from Nigeria we checked on the bus and spent a few days resting before returning home. We had a harrowing ride home, but we made it. We enjoyed services at home church and several other churches in December and wound up the year in West Harrison, Indiana.

We closed the year worshiping and opened 2019 with our hands raised and our voices lifted up in praise to God. I do not know what the year holds, but that is a pretty good way to begin.

Fun Facts
During 2018 we drove the bus nearly 17,000 miles, purchased $8220 and 2730 gallons of diesel for an average of $3.01 per gallon. The computer says I averaged nearly 8 MPG and that is pretty good considering how much we pulled the tent trailer.

The rest of the diesel is used idling and running the generator. We do not spare the generator. It was built to run and the worst thing you can do for it is not run it at all. When we need it, we crank it up and let it run.

We also ran the Green Machine a bunch of ministry miles and a bunch more personal miles. I do not have those figures yet. We buy a boatload of gas for it during the year, but at 30+ MPG, it goes a bit further.

That is 2018 in one post. Thank you for reading today.

Davy
Posted by Davy, Kelly and Odie Boggs at 1:08 AM