The Heart of The Gospel Is Change!

Before we went to Nigeria in November I reread most of David Wilkerson's book, The Cross and the Switchblade. When I was a very young man that book put in me a hunger to win souls and that hunger is stoked every time I read it.

The book was still laying on my chair when we returned to the bus in December so I picked it up and read some chapters again. On December 26th I read a passage that has been burning in my heart every day since then.

David Wilkerson's grandfather taught him an important fact about the Gospel. Jay Wilkerson said, "The heart of the Gospel is change, it is transformation. Christ's message is extremely simple: an encounter with God, a real one, means change, every time."

Oh my! What amazing power is available in the message of the Gospel of Jesus Christ! Today I am writing of a great example of that very power of transformation. His name is Bro. Jack (O.W.) Eubanks from Ellisville, Mississippi.

I do not think I have introduced the majority of you to Bro. Eubanks. I know that many of our Mississippi friends and Alabama friends know him, but the rest of you should too. He attends First Assembly in Ellisville where Bro. Kenny Morris is the Pastor and has been our dear friend for many years. 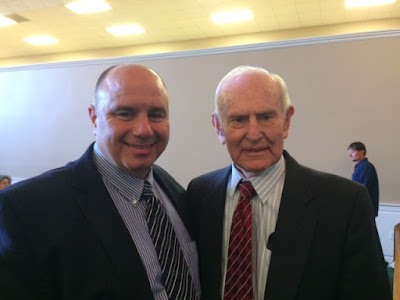 His conversion story and subsequent change embodies the very truth that Jay Wilkerson taught his grandson so many years ago. When Bro. Eubanks encountered Christ he was a man that was filled with hate and violence along with physical and emotional pain.

The Gospel brought radical change. He was suddenly saturated with overwhelming love for the very people he hated. The change was so complete that he spent a big part of his life ministering to the people he had hated and now loved.

I had heard the amazing story of his conversion for years and it was a thrill to hear it from his own mouth several years ago when we met him. Imagine my surprise when I was reading on the PE News site and came across the personal story of our very own Bro. Eubanks.

I know you will enjoy reading the story below and you will probably be interested in reading the original article from the Pentecostal Evangel in 1976. It is on pages 8 and 9.


O. W. Eubanks joined the Mississippi Highway Patrol during the race riots of 1964. A large, broad-shouldered white man, he relished the opportunity to strike fear in the hearts of African-Americans who were in trouble with the law. By his own admission, he was a foul-mouthed sinner who liked “rough stuff.”
A radical conversion to Christ in the early 1970s altered the course of Eubanks’ life, and his hardened heart became tender toward African-Americans in his rural community. He and his wife, Thelma, ultimately pioneered an Assemblies of God congregation consisting mostly of African-Americans, which they pastored for 21 years. He shared his story in the Feb. 8, 1976, issue of the Pentecostal Evangel.
Eubanks’ conversion occurred in the midst of deep personal suffering. His 20-year-old daughter had recently been killed in an automobile accident, and he had been experiencing excruciating back pain. He realized that he was far from God, and his father-in-law, a Pentecostal preacher, encouraged him to seek the Lord and repent of his sins.
Eubanks began attending an Assemblies of God church, where he accepted Christ, was healed of his back pain, and was baptized in the Holy Spirit. He was a new man, and everyone could see the difference.
After being filled the Holy Spirit, he started witnessing to people. His Bible became his constant companion in his patrol car, and he never grew tired of sharing how the Lord changed his heart and life.
One night, at a roadblock on Interstate 59, he stopped two African-American men who had beer in their car. He had to charge them with illegal possession of liquor, as it was a dry county. He also witnessed to them about the Lord, telling them that “liquor was a tool of the devil.”
One of the men, Joe Pickens, came to see Eubanks several days later. He tearfully confessed that his life was messed up and accepted Christ. Before long, Pickens and his four daughters all had made definite decisions to follow the Lord and had experienced Spirit baptism.
News of the conversions spread through the largely African-American rural community of Bay Springs, Mississippi, where racial segregation still held sway. Patrolman Eubanks had been known for his tough ways, and people took note when he began ministering Christ’s love to African-Americans as brothers in Christ.
In 1974, Eubanks started holding a Bible study, which developed into a thriving congregation. In the first two years, about 45 people accepted Christ under Eubanks’ ministry. The congregation, Bay Springs Assembly of God, was organized in 1975. The Sunday School superintendent was a redeemed bootlegger.
At the time, it was unheard of in that community for a white man to pioneer or pastor a church of African-Americans. Eubanks realized that he was breaking cultural mores. However, he insisted that God’s values must trump cultural values: “If a man is a child of God, then he’s your brother. I don’t care what color he is, you have a duty to witness to him.” Eubanks recounted “grumbling and opposition to the church,” but noted that it was “nothing that God couldn’t handle.”

Bro. Eubanks served as pastor of Bay Springs Assembly of God until 1996. Sammy Amos, an African-American, followed Eubanks and is now in his 20th year as pastor. Amos, in a recent conversation, echoed Eubanks’ vision for the church: “We only care about souls, we don’t judge people according to their color.”
Amos noted that Bay Springs Assembly of God continues to be an interracial lighthouse in the rural community, where most churches are still segregated. The congregation has about 115 adherents, including blacks and whites, and is known for its outreach and deliverance ministries. The largely African American church started by a white highway patrolman continues to demonstrate to the world that God can indeed change hardened hearts.
Read the entire article by O. W. Eubanks, “Highway Patrolman Pastors New Black Church in Mississippi,” on pages 8-9 of the Feb. 8, 1976, issue of the Pentecostal Evangel.
Posted by Davy, Kelly and Odie Boggs at 12:03 AM

Email ThisBlogThis!Share to TwitterShare to FacebookShare to Pinterest
Labels: Do You Know_____?, Preaching, Something to Think About