Salsa, Petty Larceny and Getting Inked

Here is a funny.

One day recently we went to eat at our favorite little Mexican place, Acapulco in Lebanon, Ohio to eat lunch and to drink a little salsa. 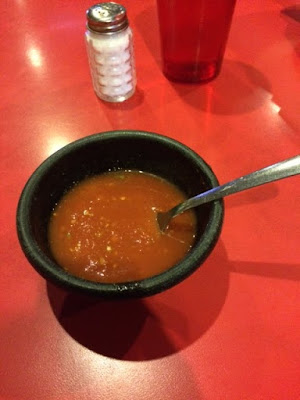 While I was paying the bill, Kelly Jo and I were talking to Rigo since there was no one else in line. Rigo was in charge that day and was running the cash register. We always have a great time talking to our friends when they are not too busy.

We left the restaurant and pulled across the parking lot to make a deposit in the ATM. When we were finished with the deposit Kelly Jo tried to hand me the ink pen she was using to fill out the envelope. She thought it came from the ATM but it did not. Then she thought I must have picked it up after signing the credit card receipt for the meal at Acapulco. But, I did not use a credit card, I paid with cash.

Where in the world did the strange pen come from? I have no idea. or I should say I HAD no idea at the moment. Now I know.

While we were driving later Kelly Jo was shocked when she looked at her arm and found it marked with ink all over and several indentations from the point of the pen. 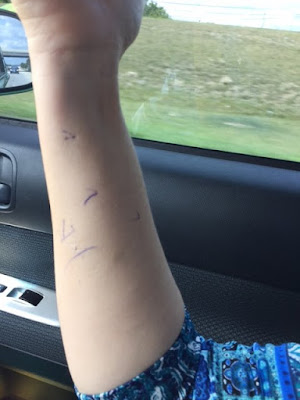 It took us a while to figure it out. She remembered putting her arm on the counter while we were checking out at Acapulco and talking to Rigo. She figured she pulled the pen off the counter with her arm and it was trapped between her arm and her purse and coat. While there it was poking and marking her arm.

So an afternoon that started innocently with some salsa progressed into my wife stealing a pen and getting inked. We do not believe in stealing or even that Christians should get tattoos. I guess when we get back to Ohio I will need to take Kelly Jo back to Acapulco to confess and return the pen. The ink is already gone.

Maybe we can drink some salsa while we are there!

Email ThisBlogThis!Share to TwitterShare to FacebookShare to Pinterest
Labels: Funny