We have attended both nights of Bristow Campmeeting so far and both have been tremendous. Odie is taking a few pictures along the way and we will try to post them later in the week.

We hit the ground running when we arrived in Texas a couple of weeks ago and there has been no shortage on things to write about here each day. In the midst of all the activity, I forgot to post about something we stopped to see on our way from California to Texas. The BoggsMobile stopped at one of the most famous oddball roadside attractions in the world.

The route we took, I-40 to Oklahoma City and then I-35 south to Texas, is not lacking great things to see or places to stop along the way. There are lots of sights to see within an hour or two of that route. There is Las Vegas, Hoover Dam, The Grand Canyon, Petrified Forest, Navajo Reservation, beautiful Albuquerque, The Big Texan and the Oklahoma City Bombing Memorial just to name a few.

We have stopped at all of these places and would have loved to stop at all or some of them on the way through, with the exception of Vegas. Once was enough for Vegas. We were constrained by time on this trip so we had to bypass all of those stops and many more.

We did take time to stop one place we have never stopped at before. We have passed it many, many times and often say, "The next time we come through here during the day we are going to stop and see that, just to say we did." This time we did.

This oddball roadside attraction has been around since 1974. It was high time we took a few minutes to stop and pay a visit to the Cadillac Ranch.

It is actually not a ranch but a piece of art with several Cadillacs from 1949-1963 half buried nose first in the ground. It was bad cold, windy and muddy but we parked next to the road and walked over to the Cadillac Ranch on the south side of I-40 on the west side of Amarillo.

It was not a good day for pictures and there were people every where but here is the picture to prove we were there! 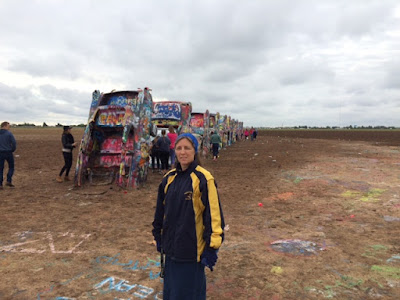 As you can probably see, folks are constantly spray painting all over the cars. The graffiti is kind of encouraged. That means the look of the cars is constantly changing. There were people painting on all 10 cars when we were there. The bad thing is that they throw the cans every where and it looks like a dump. I really wanted my grabber and a super sized dumpster!

Also the cars were buried pretty much intact but many of the parts and even body panels have been stolen. I guess it is all part of the charm. 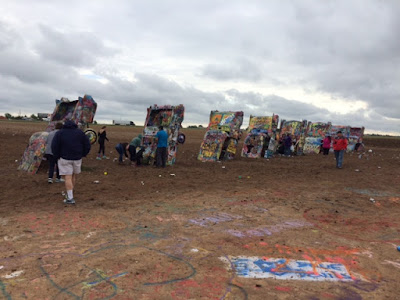 Odie stayed in the bus to avoid the mud, plus the gate is not wheel chair accessible. Not only would the chair have been muddy but she would have had to stand in the mud and work her way through the gate. It was not worth it to her, so she viewed it from the bus door.

This is a view of the bus from the Cadillacs. It is a lot farther out there than it looks from the road. 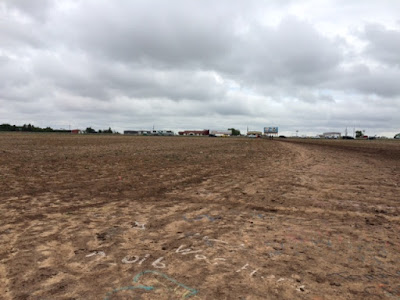 Now you can see the bus. 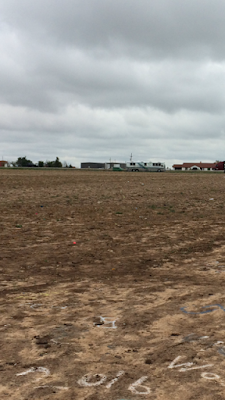 Soon we were back on the road with the pedal to the metal going east. Now the we have been to the Cadillac Ranch, we can cross that off our to do list.

Davy
Posted by Davy, Kelly and Odie Boggs at 6:17 AM