The weekend started Friday morning with more preparation for City Reach Tulsa. There was quite a bit to do at the bus and then we took the Green Machine to Tulsa. Kelly Jo and I had several stops to make in Tulsa that day and most of them involved City Reach. The tent site, Walmart, Staples, The Drum Store and Bro. Trevor Metheny's are a few of the places that come to mind.

We went to Walmart for supplies of some kind, Staples for copies, the Drum Store for drum sticks and Bro. Trevor's to pick up a shipment of banners. We spent a few hours at the tent site taking delivery of the portable bathrooms and marking the layout for the tent stakes.

We did manage to go to bed earlier than normal in anticipation of the big day on Saturday but it did not do us much good. We were so hyped up that neither of us could sleep much and Kelly Jo slept almost none at all. It was a long night that felt way too short at the end of it! 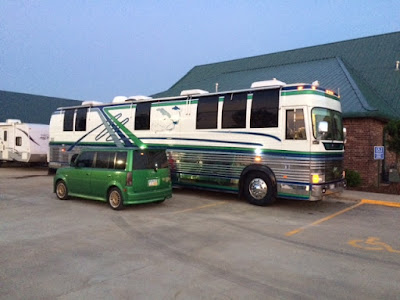 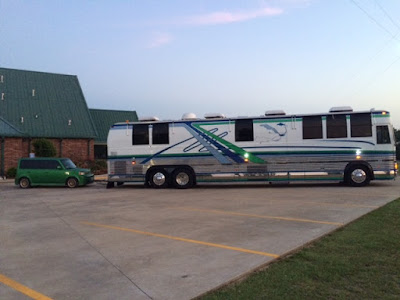 We stopped at the Quick Trip truck stop on the west side of Tulsa to top off the diesel so that we could begin the week with a full tank. Look at the price. 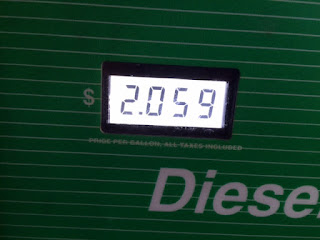 We will probably run our generator 24/7 for nine days so the bus needs to be full. That is 216 hours and we should consume about 6/10's of a gallon per hour or about 130 gallons for the week. We have plenty in the tank to cover that. I plan to service the generator while in Wichita and have it ready to run another week in Oklahoma City.

Exactly one hour after we left Kellyville, we were parked in position at Fred Johnson City park. 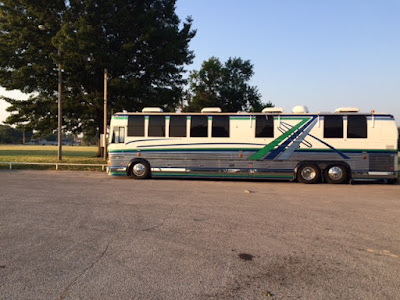 Kelly Jo prepared us a little bite to eat. A few minutes later Bro. Jimmie was there and folks began to arrive for the work of setting up the tent. Look at this crew! 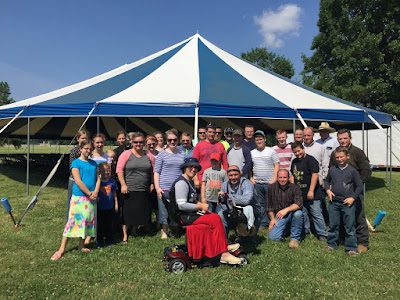 All the major work was completed in about two hours. We will post pictures of the set up later in the week. 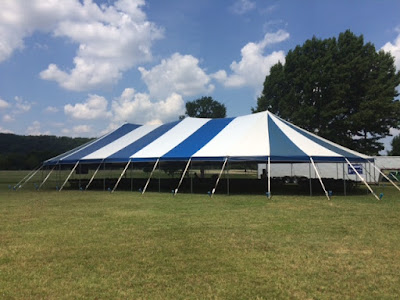 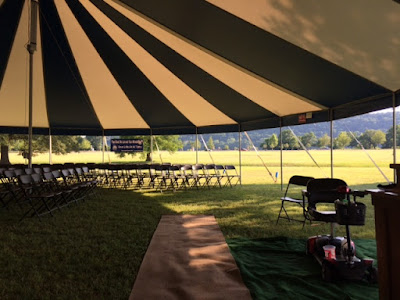 We spent the rest of the day doing all the little things that have to be done to have the tent ready to go. I appreciate all of the help. We could not do it, nor do we want to do it, without the assistance of the local churches. May God bless all these folks for their hard work.

As in most cities, we need to keep someone at the tent 24 hours a day to discourage any mischief AND in case some one wants to talk or pray. We are in our second night with the tent up as I write this and already we have had a man each night help for a few hours. Even a short time is a great aid to Bro. Jimmie, Kelly Jo and I. We are very grateful. 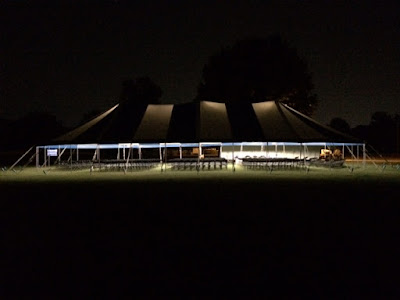 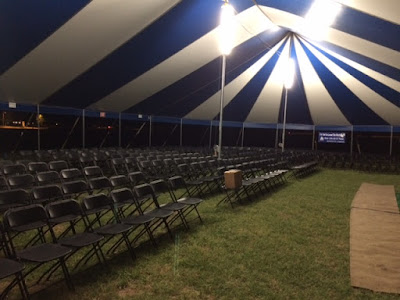 Bro. Jimmie stayed with the tent Sunday morning so I could preach for Pastor Wayne Holcomb and Amazing Grace Holiness Church in Sand Springs. It has been a few years since we had been there and I am thankful for the invitation to preach. It is clear to me that we were in the right place at the right time. 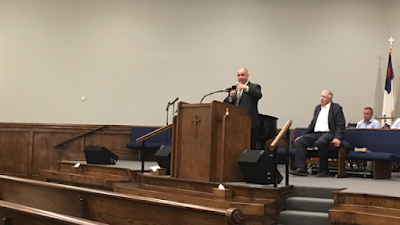 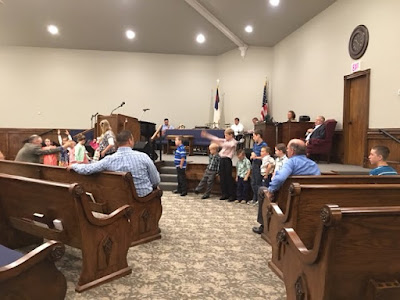 We appreciate the kindness of Pastor Holcomb and his folks. They have always received us warmly.

We left after service and went straight back to the tent. The wind had picked up and blown over several chairs. Bro. Jimmie was setting them upright but it became obvious it would not do much good until the wind stopped. The forecast had changed during the morning and the radar on our phones looked red and angry.

By 1:30 the forecast was 100% for storms and then some better for church time. 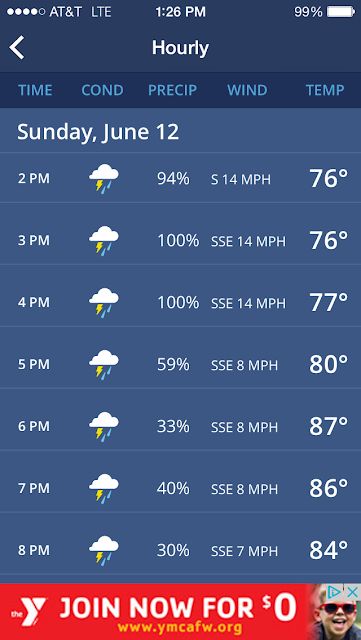 The red storm parted and went around Tulsa and this was the forecast by 3:30 PM. 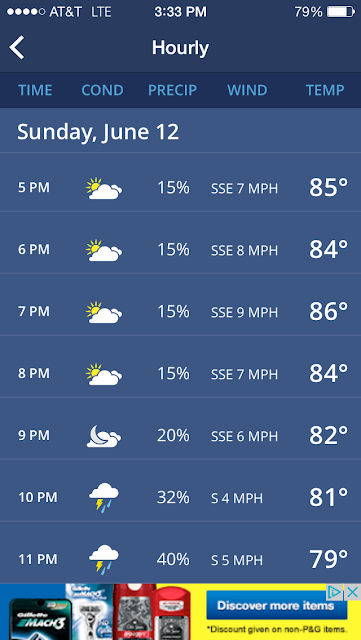 There was so much rain, lighting and wind near us that some of the folks told me later they considered not coming to church. I am glad they came because the sun was shining brightly at the tent!

Two of the churches dismissed and brought their folks Sunday night and people from at least three more of the host churches came as well. Other friends from other churches were there too and most importantly we had some visitors from the community.

As God does every time, He was working on folks before they ever came to the tent and they were in the altar praying in response to His drawing and His Word. It was wonderful! Praise God! 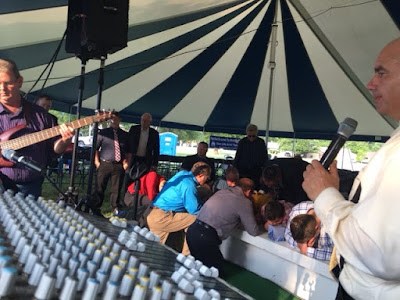 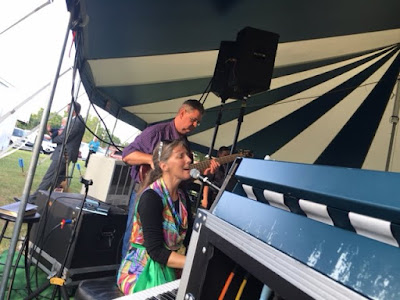 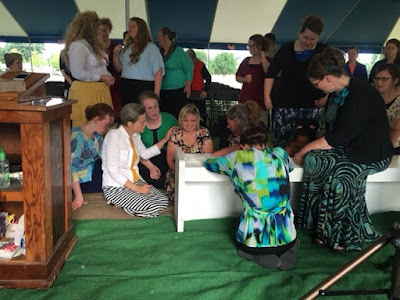 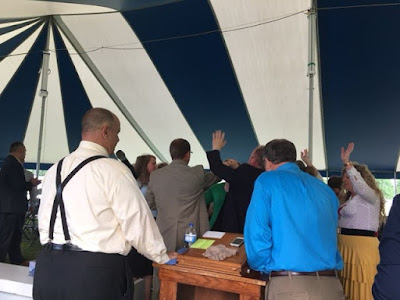 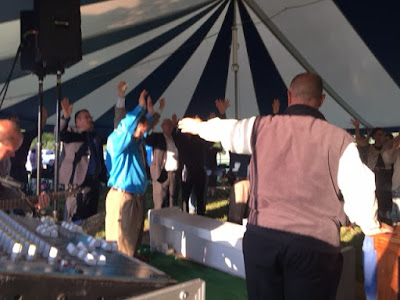 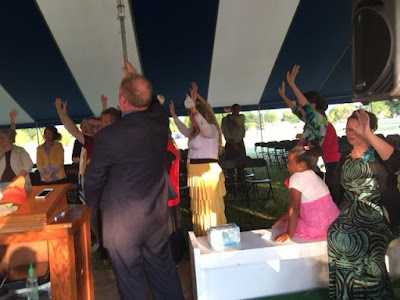 The service was a great ending to the weekend and a great beginning for City Reach Tulsa. I am looking for more and more folks to come and be saved. Please help us pray that God will have His way in hearts and lives right here this week. We know that God loves Tulsa and He loves Tulsa One Life At A Time! 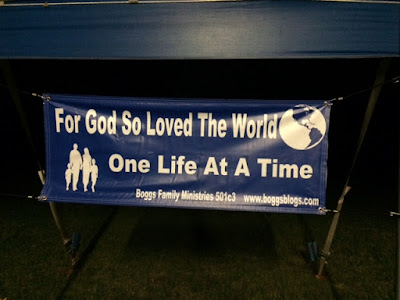 Davy
Posted by Davy, Kelly and Odie Boggs at 3:33 AM