I need to begin this weekend post with two schedule changes.

First, City Reach OKC will now go through Friday July 1st instead of Sunday July 3rd. There was a conflict in scheduling with some of the churches because of youth camp obligations that weekend and the next week. Please help us get the word out to others that might attend, City Reach OKC will be Sunday - Friday, June 26 - July 1.

Secondly, the revival at Bethel Revival Center in Boston scheduled for August 3-7 has been postponed. The congregation had secured another building and had put their very large complex of buildings on the market. Much to their surprise AND delight they have a solid contract on it already. The timing of the sale and move made revival at that time impossible so we will go at a later date.

We have had some help watching the tent this week and we really, really appreciate it. It sure takes a load off of me, Kelly Jo and Bro. Jimmy. Some of that help came Saturday afternoon so we could all attend the funeral of Bro. Don Cummins at Bethany Holiness Church. Bro. Jimmie was playing the bass and we were singing.

We met Bro. Terry Cummins many years ago and later Bro. Don and his wife and another son Bro. Galen and his wife. They have been dear friends through the years and it was an honor to sing at Bro. Don's funeral. We are often out of range and in the wrong part of the country for funerals and I am glad we were right here for this one.

Bro. Don has been sick and suffering for quite a while and he was ready to go to Heaven and his family was ready to release him. That does not make this any easier for them, especially for his wife and three sons right here at Father's Day. Please pray that God will help them.

Shortly after arriving back at the tent site, it began to really thunder and I pulled up the weather on my phone. The chance of rain was very slim. 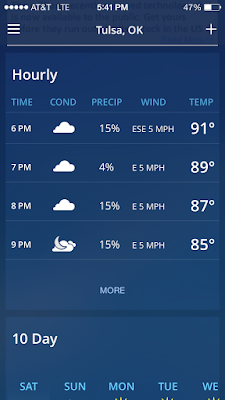 Then I received a text from just east of the tent and they said is was raining buckets full there. In a few moments the buckets of rain started at the tent and it rained a pile of water in just a few minutes. 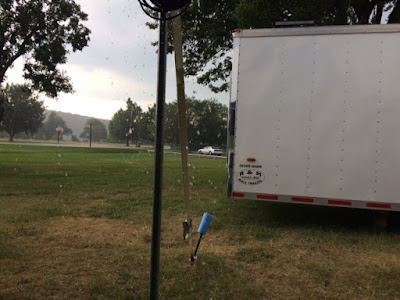 It was a strange storm with lots of wind and bunches of rain and it was moving rapidly from east to west. The rain lasted a while and then stopped like someone turned off the faucet! All of us under the tent looked at each other like, "Did I hear what i thought I heard?" The heavy rain stopped just like THAT.

It rained so much and so fast that the parking lot was flooded by the bus door with several inches of water. KJ improvised using some bags as galoshes in order to get out of the bus. 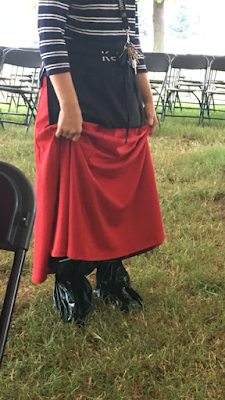 It may look funny but it works. I had to do the same thing to get out of the bus after I had my dress clothes and shoes on.

There was nothing on the radar behind the quick storm so we set up the sound system after the rain moved through. I am so glad we did. The weather was beautiful by church time. We had more visitors from the community, as we have had every night, and God was touching and helping in the altar. It was great to see! God healed some hearts Saturday night. 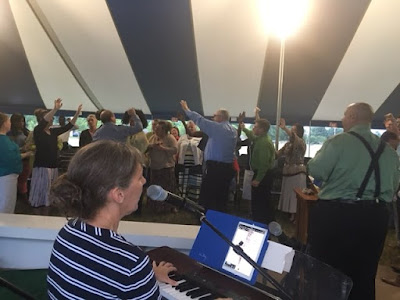 Sunday morning, before it became too hot, we did some of the work that needs to be done so that taking the tent down is easier after church Sunday night. That includes taking down the lights and power cords. Church started at 6:00 and we did not need the lights during service.

I took these pictures from the top of the ladder at the last pole. I think it gives you an interesting perspective. 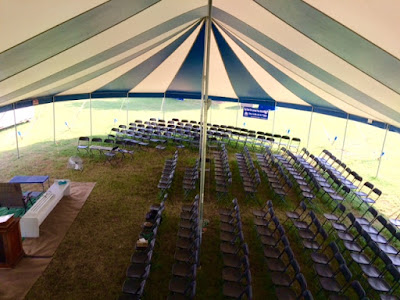 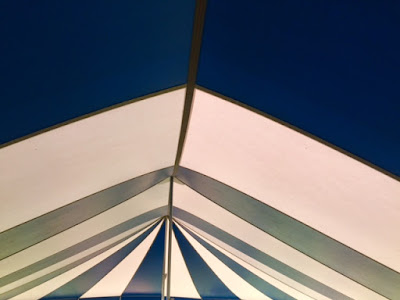 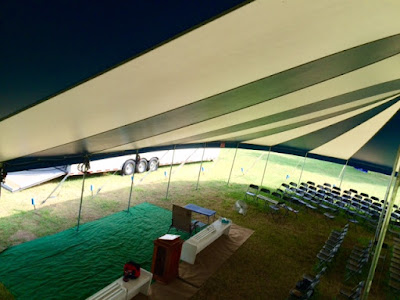 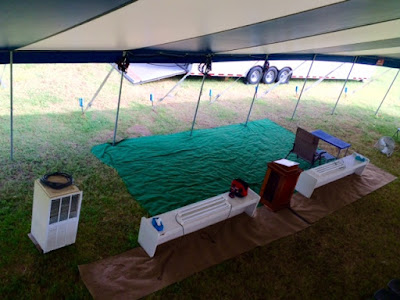 This was Sunday lunch. I have one word for you, Wow! 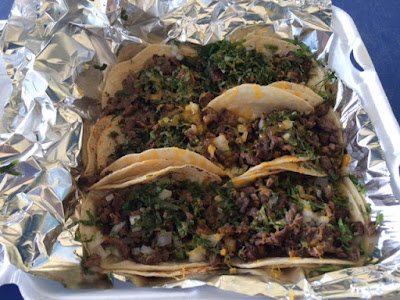 Bro. Jimmie worked most of the day preparing the trailer for inserting the chairs and tent. He works so hard and alleviates a lot of the work load from me and Kelly Jo. I appreciate his diligence and work.

Sunday was hot again but it gave things a chance to dry out after Saturday's soaking. The temperature actually was not too bad by church time.

The final service Sunday night was outstanding from the beginning. God moved in the very first song as the people worshiped Him. We had folks praying for salvation as we did every night of City Reach Tulsa and we are very thankful to God for that. 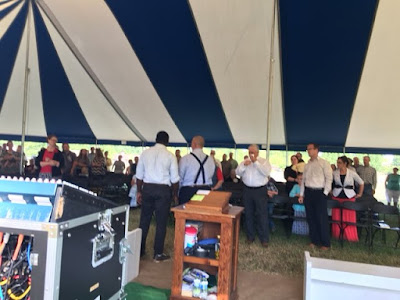 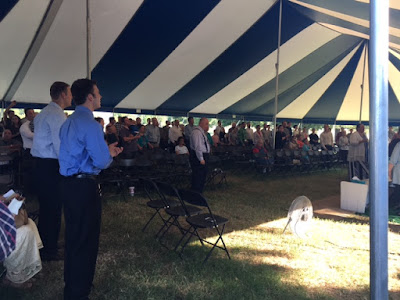 We will have more pictures from Sunday night later in the week.

These folks came to have church Sunday night but they also came to work. We said the final Amen at 8:06 and the chairs, sound system, the tent and all the extras were down, in the trailer, strapped in place and ready to ride at 8:53. That is 47 minutes. That is the new world record for the big tent set up!

We will also have more pictures of the tent take down later.

We had a glitch in our house electric on the bus during church Sunday night and I have not gotten to the bottom of it yet. Right now the electric is working fine so I will go to bed and investigate and ask experts when I get up. I fear I may have a damaged inverter which is a big deal on this bus. I will keep you posted.

We pulled out of the city park, fueled up at Flying J in Tulsa, emptied the holding tanks and arrived at Bethany Revival Center in Wichita, Kansas 200 miles later about 1:45 AM. We parked in our spot and breathed a big sigh of relief when the electric worked when we plugged in!

That pretty much wraps up the weekend. Thank you for tuning in. I am going to hit the "Publish" button and go to bed for 12 hours! Yeah Right!

Davy
Posted by Davy, Kelly and Odie Boggs at 3:52 AM