We bought the BoggsMobile in Sanford, Florida in March of 2008. We had been in touch with the dealership for a few months about the bus and they told us the week before that they were willing to consider the offer we had made months before.

We arrived to see it for the first time on Monday March 17, 2008. A friend had driven it for me and my Dad had looked it over and let us know it was very clean and seemed sound but we needed to see it for ourselves.

By that time we had looked at dozens of buses and we knew that pictures could be very, very deceiving. We spent a few hours looking it over and driving it and eventually made another offer that included some things we wanted repaired. They counter offered and we accepted it the next day.

By March the 21st they had the repairs completed and we had the money in place to make the deal. We signed the papers and spent about 8-10 hours trying to learn the systems of the bus. I was overwhelmed. It was like drinking from a fire hose.

This is where the 95/96 Prevost Vantare that became the BoggsMobile was sitting when we first laid eyes on it in Sanford, Florida at Florida Luxury Coach.

This is what the interior looked like. Now there is a bunk where the table and chairs were on the right, the barrel chairs are gone and the carpet has been replaced by engineered hardwood. 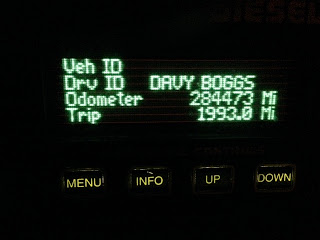 It was exactly seven years after we first bought the bus and we were only six miles shy of putting 100,000 miles on the BoggsMobile. That is an average of just over 14,000 miles each year. That is not too bad for us compared to how many miles we used to drive. 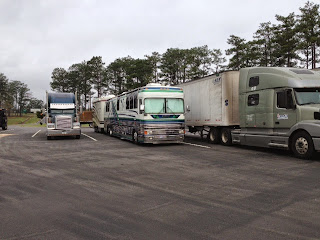 Early Saturday we took these pictures as we rolled past the 100,000 mile mark. 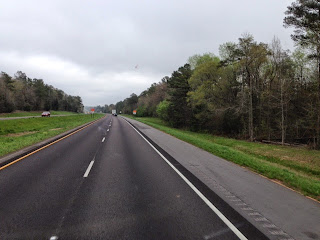 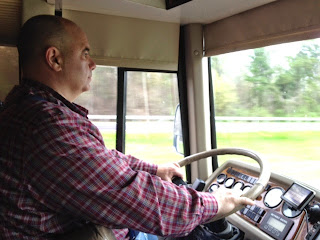 We are thankful for 100,000 miles on the BoggsMobile and we are praying for many, many more happy and trouble free miles!

Posted by Davy, Kelly and Odie Boggs at 7:03 AM