I have been busy doing the "work" of the evangelist. If bus work bores you or talk of holding tanks makes you sick then you might want to skip today's post.

Monday was a bus project day. I have needed to do this for weeks but the weather has not cooperated until now. I needed a day without rain and I needed to be parked on a solid surface. Monday at Forts Lake was perfect.

My gray tank, the tank the shower and sinks drain into, had a broken valve. Without a working valve there was no way to drain the tank properly. Thankfully the BoggsMobile was designed with a second gray tank valve. Unfortunately the second valve had been "modified" in the far distant past and had to be rigged to drain properly and because of this I could not rinse the hose after emptying the black tank and it took a long time to drain it.

I had drained the tank overnight but when you remove the valves you still get quite a bit of water. In order to have less spillage I cranked the engine, raised the back end of the bus and lowered the front end. I put jacks under the jacking points in the back so the water that was left in the tank would move toward the front.

I am pretty sure this valve was original because the bolts and nuts were rusted way beyond removal. I had purchased a Dremel tool and a 90 degree adapter and it worked perfectly to cut through the four corners of the valve and cut the bolts in two. Three of them were relatively easy but the bottom one on the back seemed impossible to get to.

I was finally able to get in the right position by God's help and I finally got it cut. 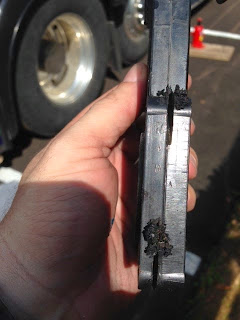 This is with the valve removed and the bracket and rubber piece on the tank side removed as well. The rusted screws remained in the bracket holes so I soaked them with WD 40 several times to get them out. That is what made the mess. 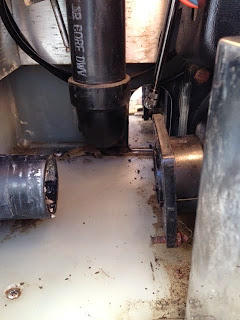 This is with both gray valves removed. 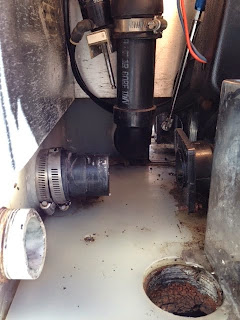 You can see my mirror that I used to see how to cut the valved out. 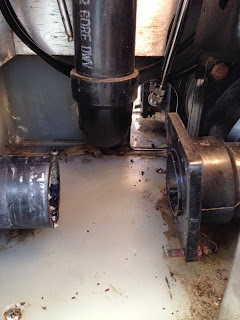 One corner on the tank side bracket was busted so I replaced it. I probably could have reused it but it is like a $2 item. Since it is so hard to remove I decided to bite the bullet and spend $2. Of course then I had to buy a small piece of 1 1/2" pipe and the primer and cement to put the pipe in the bracket. 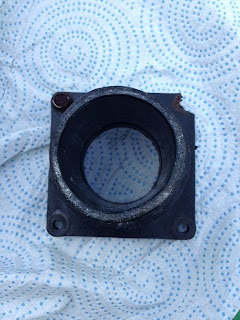 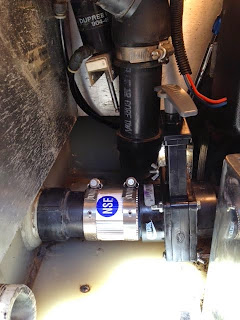 I put wing nuts on the bolts to make it easier to remove next time. I could not get my fingers on the bottom back bolt but Kelly Jo got the wing nut started for me. 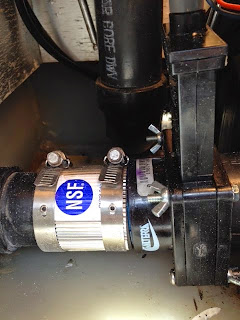 I also installed the secondary valve properly. I bought a new rubber bushing for it and cut it down to size. Now both valves are working. The main valved drains into the large drain. 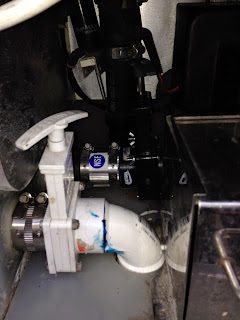 I had Kelly Jo run several gallons of water in the gray tank and both valves held water without leaking so far. Praise God for that!

Davy
Posted by Davy, Kelly and Odie Boggs at 7:40 AM