Recent Posts
Douglas, Georgia Pictures
Some Things Are Worth Dividing Over
PFYC - History In The Making

Thursday was a travel day and Friday was a work on the bus day. That just about covers it but I will go ahead and give you the details anyway. Lol

We stayed up late Wednesday night visiting with Bro. Marshall and Sis. Paige so we did not leave near as early as we had hoped to Thursday morning. In fact it was just a few minutes before 10:00 when we pulled out of the parking lot. We sure hated to leave our new friends.

Once we got on I-75 we stopped at a rest area and emptied the holding tanks. 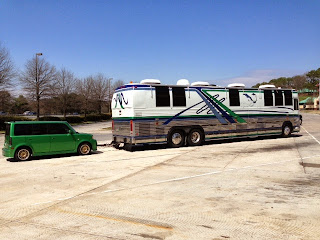 The only other stop was when we pulled into Flying J and filled up the big tank. 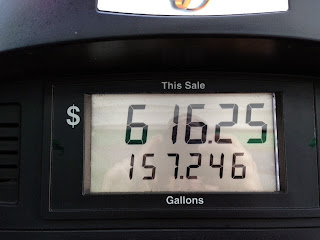 The price is not so bad when you consider we had not filled up since we were in Jackson, Mississippi on our way to Ellisville on February 21st.

We pulled into Vonore, Tennessee just before closing time on Thursday evening. Mr. Jeff Rowe has opened up a repair facility called East Tennessee Luxury Coach and he is doing great work and receiving rave reviews. He has worked on Prevost buses and their conversions for many years. 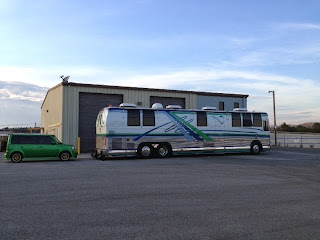 They pulled me inside Friday morning and replaced a side window that was cracked pretty badly. The windows are in two pieces. The top part is fixed in place and the bottom part swings out to open. The top part was broken on one of the windows on the driver's side. I had ordered the window from Prevost a few weeks ago and had it shipped to Vonore. 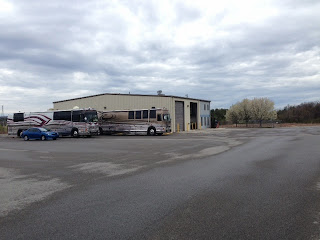 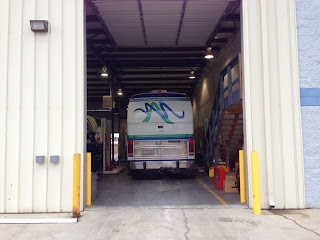 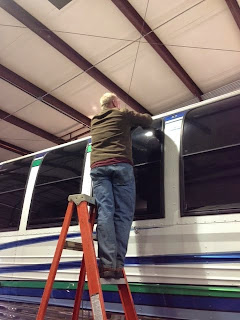 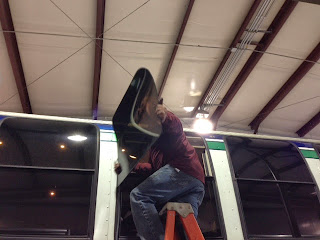 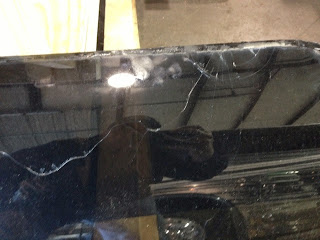 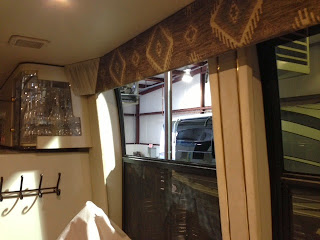 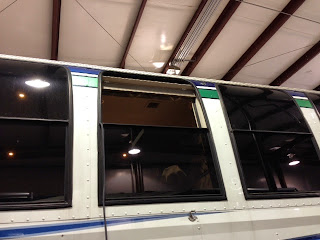 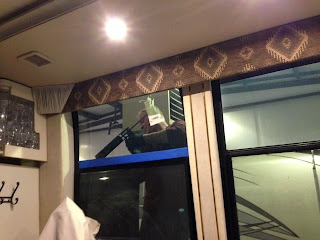 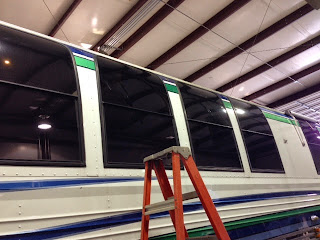 They lifted the BoggsMobile in the air to look at a potential problem and found another more serious one. I have a wheel seal leaking on the driver's side inside dually. That will need to be repaired sooner rather than later. Mr. Rowe also found the source of some persistent fluid leaks.

After they were finished I pulled the BoggsMobile outside and plugged up for the night. We stayed there again Friday night to allow the sealant on the new window to cure. Mr. Rowe had some specialty latches that we have been looking for so I purchased several and replaced latches all afternoon. It is a good thing that I have nothing else to do besides work on the bus.

Kelly Jo and Odie drove to Knoxville to have some work done on Odie's phone. She has been having some problems with it and she was hoping they would fix or replace it. The Apple folks got her going again and she is back in iPhone happiness.

We hope to pull over to Pigeon Forge this morning to be in position for PFYC. We plan to leave the BoggsMobile in Tennessee and drive the Green Machine to Bristol, Virginia on Sunday for both services. We are excited to see our dear friends the Hortons, Switzers and all the folks in the church there.

God bless you all for reading.

Davy
Posted by Davy, Kelly and Odie Boggs at 6:51 AM