Hey friends, I hope you have had a superb week. Revival this week was outstanding every service!!  I can not begin to tell all the things God did this week for the people at Forts Lake Assembly of God! It was truly amazing to watch Him move and answer prayers. As always we had a grand time with Pastor Tim Cauley and family. We are sad to leave them and move on to Georgia.

It has been a few years since I shared the story behind my nickname Odie. Yes, Odie comes from Garfield the comic strip, Garfield's dog friend is named Odie. When I was around 2 years old I crawled through the house like a dog. I always had my tongue hanging out of my mouth. A lot of the time my brown hair was fixed in doggie ears. So dad tagged me as looking like Odie. 26 years later it has stuck around. I like my name because it is unique. Everyone knows who Odie is.  Whenever I am called Andrea people are like who???. 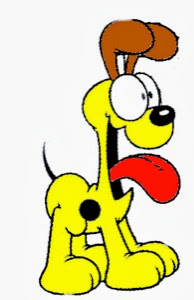 This week I was reading a blog post on Bekah's Bits it perked my interest and sent me on a virtual tour. Rebekah and her husband Ryan live in Marion, Indiana. They have set out to tour the 90 something counties in their state.  Each tour they find something special to that particular county. This past Saturday they toured their own Grant County. It happens to be the birth place of cartoonist Jim Davis. The creator of Garfield and my name sake Odie.

Grant County offers the Garfield Trail of statues through out the county. I would like to visit the statues sometime and get a picture of Garfield and "Odie". After seeing Bekah's cool pics on her blog  I began searching for more info and found this.

Here is some information on Jim Davis from his website. 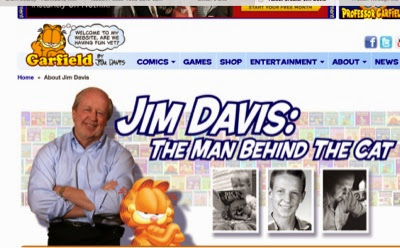 Cartoonist, Author, Producer, Director, President, Founder, Screenwriter, Playwright, Environmentalist, Philanthropist — all these titles can be used to describe Jim Davis, best-known as the creator of GARFIELD.

Jim Davis, 1947
Jim Davis was born July 28, 1945 in Marion, Indiana, and raised on a small farm with his parents, James and Betty Davis, and his younger brother, Dave (Doc). Like most farms, the barnyard had its share of stray cats; about 25 at one time, by Jim's estimation. As a child, he suffered serious bouts with asthma and was often bedridden. Forced inside, away from regular farm chores, he whiled away the hours drawing pictures.

Gnorm Gnat
In college, he studied art and business before going to work for TUMBLEWEEDS creator, Tom Ryan. There, he learned the skills and discipline necessary to become a syndicated cartoonist and began his own strip, GNORM GNAT. When he tried to sell the strip to a newspaper syndicate he was told, "It's funny, but bugs? Who can relate to a bug?" After five years of GNORM, Davis crushed the bug strip idea and tried a new tact, studying the comics pages closely. He noticed there were a lot of successful strips about dogs, but none about cats! Combining his wry wit with the art skills he had honed since childhood, GARFIELD, a fat, lazy, lasagna loving, cynical cat was born. Davis says Garfield is a composite of all the cats he remembered from his childhood, rolled into one feisty orange fur ball. Garfield was named after his grandfather, James Garfield Davis.

The strip debuted on June 19, 1978 in 41 U.S. newspapers. Several months after the launch, the Chicago Sun-Times cancelled GARFIELD. Over 1300 angry readers demanded that GARFIELD be reinstated. It was, and the rest, as they say, is history. Today, GARFIELD is read in over 2400 newspapers by 200 million people. Guinness World Records™, named GARFIELD “The Most Widely Syndicated Comic Strip in the World.” Davis’s peers at the National Cartoonist Society honored him with Best Humor Strip (1981 and 1985), the Elzie Segar Award (1990), and the coveted Reuben Award (1990), the top award presented to a cartoonist by NCS members.
Garfield quickly became a sensation in the licensing world, too, inspiring Davis to form his own company to take care of Garfield business concerns. Paws, Inc., founded in 1981, manages the worldwide rights for the famous fat cat, and Davis serves as President.

Jim has won four Emmy Awards
Garfield’s fame spilled over to television and Davis penned eleven primetime specials for CBS-TV. He received ten Emmy nominations and four Emmy Awards for Outstanding Animated Program. Movies were next, and Twentieth Century Fox turned out Garfield: The Movie (‘04), and Garfield: A Tail of Two Kitties (‘06). Davis also wrote the original screenplays and executive produced three animated features for DVD: Garfield Gets Real (‘07), Garfield’s Fun Fest (‘08), and Garfield’s Pet Force (‘09). Also in 2009. “The Garfield Show” made its debut on Cartoon Network. Today, the CGI animated cartoon is in its fourth season and is seen in 131 countries, including China, where CCTV broadcasts the show daily.


Davis’s philanthropy has been directed at educational and environmental projects. He founded The Professor Garfield Foundation in cooperation with Ball State University, to support children’s literacy. A free educational web site www.professorgarfield.org is the cornerstone of the Foundation’s work to date. Davis spearheaded reforestation, prairie and wetlands restorations, and built the world’s first all natural wastewater plant for commercial use. He was awarded the National Arbor Day Foundation’s Good Steward and Special Projects Award, and the Indiana Wildlife Federations’ Conservationist of the Year Award.
Davis spends his leisure time golfing, gardening, fishing, and enjoying his wife, children, and grandchildren. In a nod to Garfield’s friends in the comic strip, Davis also keeps one cat, Nermal, and a dog, Pooky.

Here are some pictures of the different statues I found on Google. 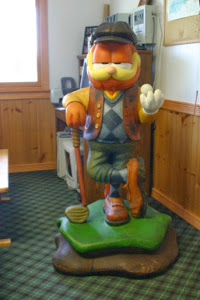 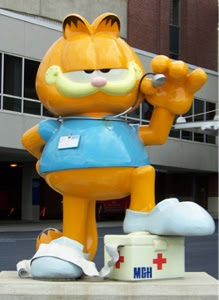 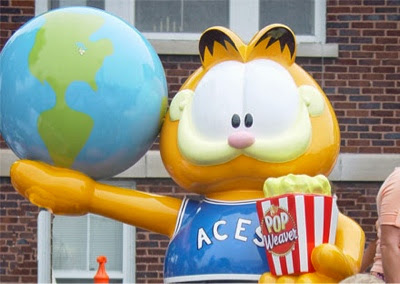 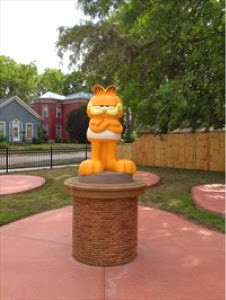 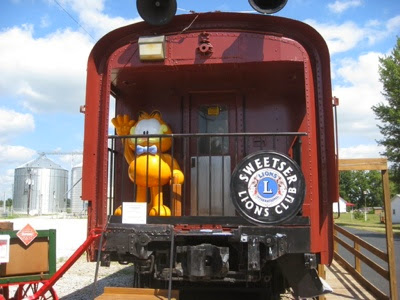 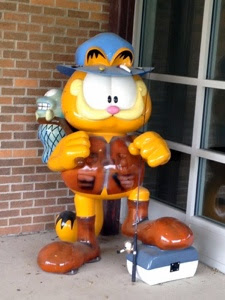 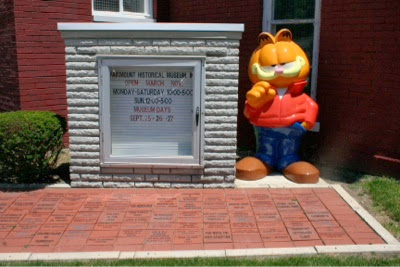 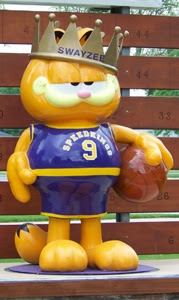 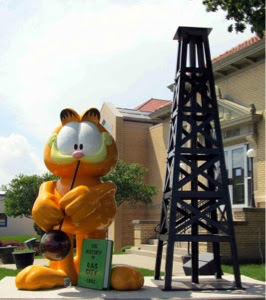 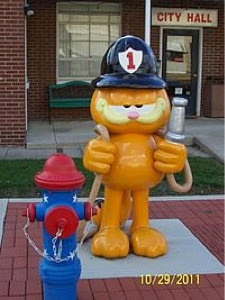 This one is currently gone for repair. Apparently he has been hugged too tight and was needing attention. 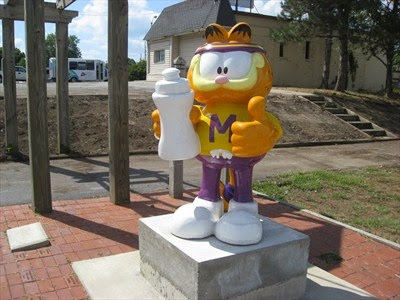 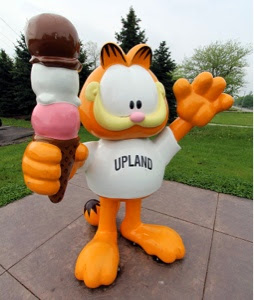 In my searching I read some of Garfield's funny antics. So I will leave you with a few laughs.  Have a great weekend!
Odie

Posted by Davy, Kelly and Odie Boggs at 4:46 PM

Email ThisBlogThis!Share to TwitterShare to FacebookShare to Pinterest
Labels: Odie