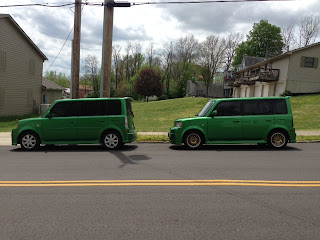 In 2006 the special release version of the 2006 Scion xB was called Release Series 3.0. They made 2200 of them and they were all Envy Green. Each one of them has a identification plate on the dash. Ours is numbered 201 in the series. What are the chances that two of them would be in the same small town?

Evidently the odds are pretty good. We have seen four of them in relatively small places that we have been too in the last year. One lives in Lolo, Montana. One lives in Paducah, Kentucky. One lives in Fair Hope, Alabama. And one lives right here in Waynesville, Ohio!

We saw the one in Waynesville right after we bought ours last May. Thursday we were in town and spotted the other one parked near the post office. I pulled in behind it and Kelly Jo got out and snapped a few pictures with my phone. Pretty cool, huh?

It is a little different than ours. Ours has updated wheels, updated tail lights and several updated dents and  scratches. Ours even has a front bumper that has been "kissed" by Bambi before she scampered off into the night. Other than those few things, they are exactly alike!

Later in the day we were at my parents house. The driveway was nearly full so I pulled up into the side yard. We came out in the evening to leave and we had lost the Green Machine. It was hidden in the beautiful green grass. I kept pushing Odie around the yard in her wheel chair until we finally bumped into the car. It is a good thing it was not eaten by a grasshopper!


My Dad is home and doing well. He has long road of recovery ahead but God has helped him tremendously. Thank you so much for praying for him.

Email ThisBlogThis!Share to TwitterShare to FacebookShare to Pinterest
Labels: The Green Machine